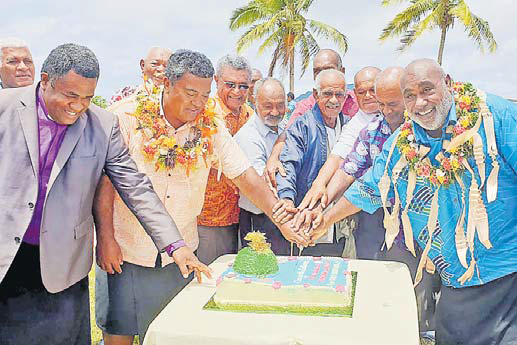 Minister for Fisheries Semi Koroilavesau (right) and villagers of Mavana cut a celebratory cake to mark the launch of the marine sanctuary. Picture: SUPPLIED

Villagers of Mavana on Vanuabalavu in Lau had a reason to celebrate on Friday as they witnessed the launching of a marine sanctuary at Duff Reef or Cakau Galu.

While launching the initiative at the village, Minister for Fisheries Semi Koroilavesau said the initiative was aimed at sustaining and conserving vulnerable marine resources.

Mr Koroilavesau said the declaration of Duff Reef to become a marine sanctuary was fitting as the site was well known for turtle nesting and foraging.

“This commendable initiative is aligned to Fiji’s National commitments and International goals and in particular is Fiji’s commitment under the Ocean Pathway which was launched during Fiji’s presidency at the COP23 in Bonn, Germany.

“This includes protected and managed areas and reducing stresses while increasing action on blue carbon.

“Initiatives as such are critical as it has a wide support from our communities that are custodians of our shared marine resources.”

Duff Reef sanctuary is one of the initiatives conducted in collaboration with the Conservation International through the Lau Seascape program.