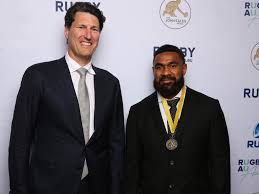 Rugby Australia reports Koroibete won the battle of the Fijian-born backs to see off Samu Kerevi and claim the John Eales Medal at awards in Sydney.

Koroibete’s stunning form at the Rugby World Cup was enough for him to become the first winger bestowed with the country’s premier player prize, awarded since 2002.

Long-range tries against Samoa in Sydney and Georgia in Shizuoka were among the most spectacular solo scores of the year while clean breaks were a regular feature during his four appearances at the global tournament.

The 27-year old polled 200 votes from his Wallabies teammates, 50 clear of second-placed Kerevi, the powerhouse Queensland Reds back who was earlier crowned Australian Super Rugby player of the year.