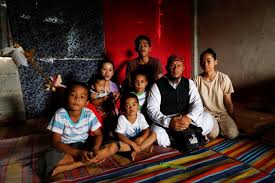 Mohammad Ali Acampong, 42, poses for a portrait with his family in a school-turned-evacuation center at Mipaga, Marawi City, Lanao del Sur province, Philippines, May 12, 2019. REUTERS/Eloisa Lopez

MARAWI CITY, Philippines (Reuters) – It had only been a week since Mohammad Ali Acampong finished renovating his house when bombs and bullets struck Marawi City.

Two years ago, pro-Islamic State militants took over in a bid to carve out their own “Wilayah”, or province, forcing nearly 100,000 people to flee in what became the Philippine military’s toughest and longest conflict since World War Two.

Acampong, a local government official, left his three-storey lakeside house with his family of eight.

“We had a comfortable life before. Now we live in between shelters, enduring heat, the lack of water, the lack of everything.”

Marawi was once one of the most picturesque cities in the Philippines.

About half of it is now charred concrete and skeletons of buildings, the effects of 154 days of air strikes and artillery by the military, and booby traps the rebels laid everywhere to keep them at bay.

The Acampongs now live in a tiny temporary housing unit on the city’s outskirts, competing with thousands of families for water and other basic utilities.

At least 500 other families live in plastic tents, like Asnia Sandiman, 25, who produces made-to-order clothing with a government-issued sewing machine.

“The tent is fine until it rains and it gets so cold, or until the heat is so bad,” Sandiman said.

“My deepest hope is that we are allowed to go back to Marawi but honestly, I would take any permanent address just to get out of here.”

Hundreds of militants, 165 soldiers and at least 45 civilians were killed in the five-month conflict. President Rodrigo Duterte in October 2017 declared the city liberated, and its rehabilitation officially underway.

Bangon Marawi (Rise Marawi), an inter-agency task force in charge of reconstruction, has a deadline of 2021 for rebuilding and remains confident of meeting that.

“We could only go as fast as legally possible. We can’t make shortcuts,” its field office manager, Felix Castro, said.

“It takes a while in the beginning but it will be quick once it starts.”

Except for stray dogs and soldiers on guard, Marawi’s commercial center has been abandoned. There is no sign of the promised rehabilitation.

Thousands of people are in limbo following a conflict that no one saw coming.

Most are jobless and dependent on relief goods, like Noronisah Laba Gundarangin, a mother of three, who lives with four other families in her sister’s home.

The 73,000 pesos ($1,385) her family received from government agencies isn’t enough for a small business. They have debts to pay and children to feed.

Gundarangin, 40, wonders what happened to all the help and money pledged by the international community when the war was in the spotlight. The authorities say not all of that has materialized.

“I know billions (of pesos) were donated to Marawi but they go through so much bureaucracy that by the time it reaches us, they are pennies,” she said.

The task force commander, Eduardo del Rosario, on Monday said obstacles to progress were debris, unexploded ordnance and unsafe structures, but said those should all be cleared by November, with some construction to start in September.

While awaiting that, the task force has been allowing people to return to see the place they once called home. Now they call it “ground zero”.

Acampong gave his consent for his house to be demolished. He returned recently and found a papaya tree growing in its place.

“It’s painful because we had nothing to do with this war. We were just caught up,” he said.

“Everything we’ve worked hard for, all the big and small investments, are now all gone.”

“Every day, it’s like this. Waiting and waiting, as if waiting for death.”