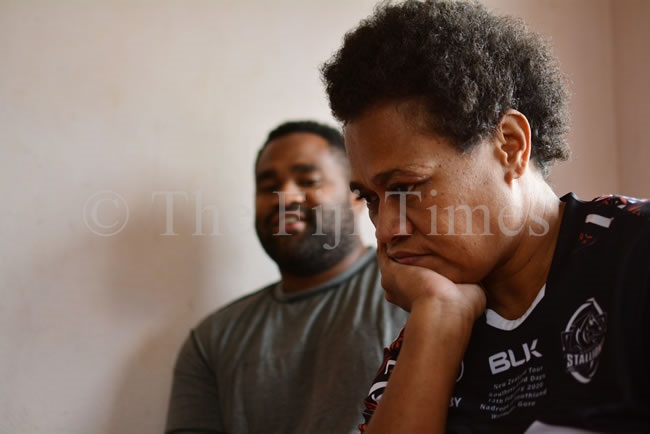 Michelle Bomani and son Tomasi Mara inside their home at the Narere. Picture: JOVESA NAISUA

A promising tight head prop for the Nadroga rugby team, Tomasi Mara, has hanged his rugby boots at the age of 23 to look after his visually impaired mother.

The rising star made his debut for Nadroga when they toured New Zealand last year, but upon his return he had to make a call he knew would affect his future in rugby.

The Natewa lad from Vanua Levu didn’t hesitate to look after his mother because of his love for her was more than his love for himself and the game of rugby.

“I’m the oldest in the family and I should take the responsibility of looking after our mother,” said Mara.

“My mother raised me and my brother plus three children from our step dad.

“I made this choice because my nau (grandmother) who was looking after my mother passed away last month and there was no one else I saw would take good care of mum, but me,” Mara said.

Nadroga Rugby Union president Tiko Matawalu said they were proud of the decision Mara made after the New Zealand tour and hoped everything would be OK for them in the future.

“Tomasi is a gifted young player who loved to train and he was also one of the very few tighthead props we had and we knew he had something better for him in the future of his rugby career.

“But to give up his talent and to look after his mother was one of the bravest choices a young man could make especially with a gift that could take him a long way and provide better opportunities for him,” said Matawalu.

Mara’s 46-year-old mum, Michelle Bomani was in New Zealand with her second husband when she got sick as a result of being physically abused and returned home.

“In 2016, doctors said she was legally blind and my grandmother (mum’s mother) took care of her before she passed away last month,” Mara said.