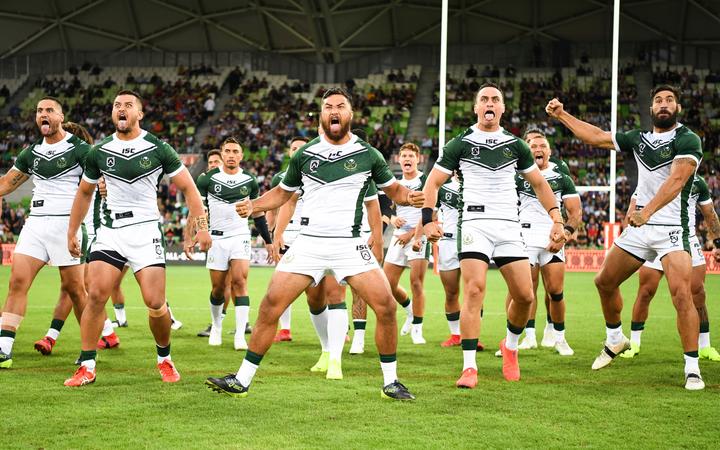 The Maori All Stars perform their haka. Photo: NRL Photos/Photosport

New Zealand Māori Rugby League team is standing in solidarity with its Indigenous Australian counterparts by not singing the national anthem before Saturday night’s match between the two sides.

Earlier this month, the Australian Rugby League (ARL) commission announced they would grant a request from the Indigenous Australian players not to sing Advance Australia Fair before Saturday night’s men’s and women’s games on the Gold Coast.

The Māori All Stars have followed suit, confirming they won’t sing either version of God Defend New Zealand.

New Zealand Māori Rugby League chairman John Devonshire, who was with the Māori teams on the Gold Coast, said the decision to have no anthems performed was ultimately made by the ARL commission.

“We’ve made it quite clear that we’re very proud of our bi-lingual anthem and we would love [to sing] our anthem but we’ve supported the stance of the indigenous [Australian players].

“We’ll have the haka and cultural exchanges pregame but at the request of our indigenous brothers and sisters, there will be no anthems.”

The former Kiwis player and coach said they were proud to show solidarity to their Australian counterparts.

“It’s all about supporting our indigenous brothers and showing unity.

“Anytime we get to sing our anthem we’re very proud of it. We’re proud that it’s bi-lingual and it’s got our reo in it but this time we decided to support our indigenous brothers.”

Different options were considered before the New Zealand anthem was canned for the matches.

Devonshire said alternate approaches were put forward, but not suitable given the circumstances.

“We did it but it came back from the ARL [there would be] an uncomfortable feeling.

“We put some scenarios around, let’s just do our one.

“But what are our indigenous brothers and sisters going to do if we just have our anthem and they don’t have theirs.”