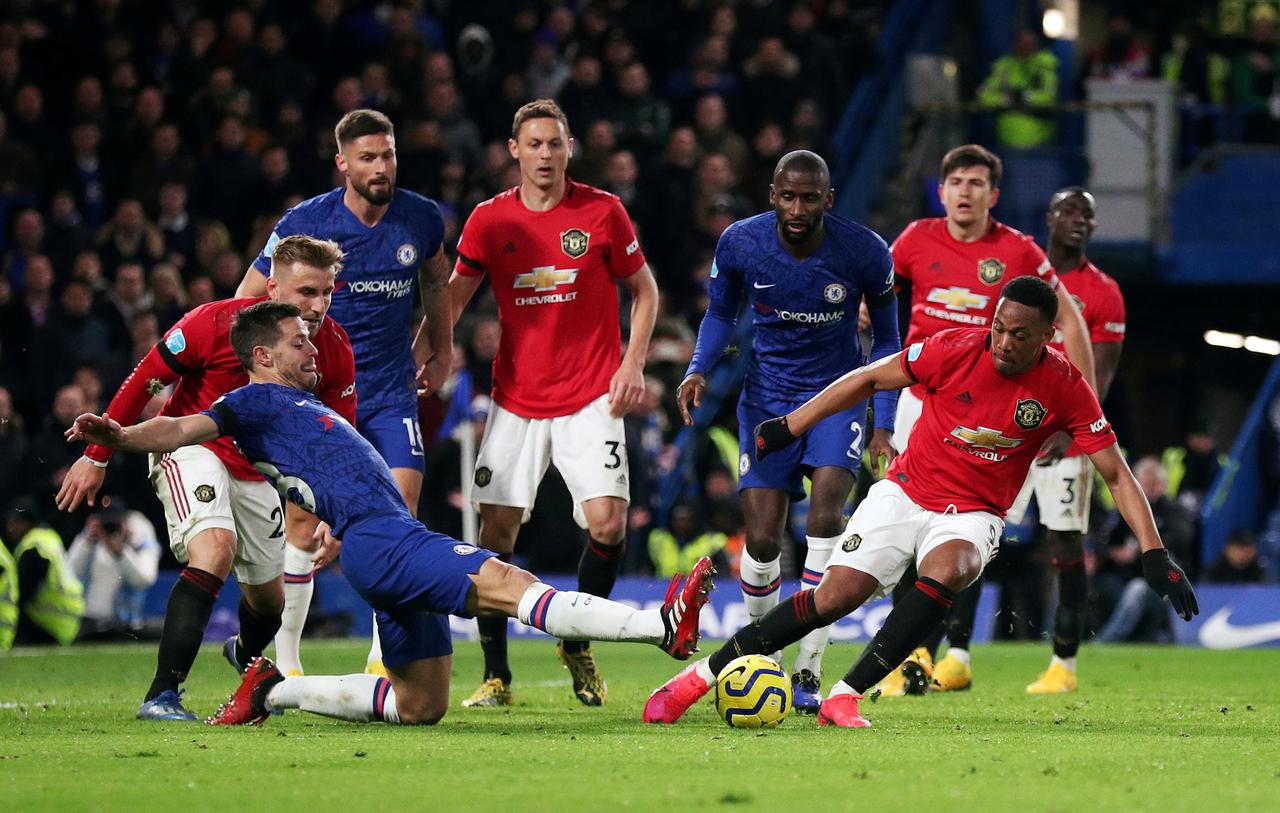 LONDON (Reuters) – Headed goals from Anthony Martial and captain Harry Maguire earned Manchester United a hard-fought 2-0 win at toothless Chelsea on Monday amid more VAR controversy, putting them back in the hunt for a top-four Premier League finish.

The VAR system made the headlines once again after two Chelsea efforts were ruled out and England international Maguire escaped sanction for a kick out at Michy Batshuayi.

In a high tempo, if often scrappy, game Ole Gunnar Solskjaer’s United side made the most of their chances while Chelsea, whose form at home has been suspect all season, squandered a string of opportunities.

“It was a solid performance,” said Maguire. “We knew we had to get the win to close the gap. It’s a big three points.”

Chelsea captain Cesar Azpilicueta added: “In two key moments we lost the game. We created clear chances and were looking good but we were punished before halftime.”

A fine glancing header from Martial just before halftime from an Aaron Wan-Bissaka cross put the visitors ahead. It was United’s first Premier League goal in four games.

Defender Maguire made it two in the 66th minute, losing marker Antonio Rudiger to head home from a corner by United’s new Portuguese signing Bruno Fernandes.

“I know I caught him and I felt he was going to fall on me and my natural reaction was to straighten my leg to stop him,” Maguire said. “It wasn’t a kick out and there was no intent.”

In the second half Chelsea netted twice only to be left disappointed. Kurt Zouma thought he had scored from a corner in the 54th minute but VAR ruled that there was a push in the area by Azpilicueta on United’s Brandon Williams.

Then substitute Olivier Giroud’s header in the 77th was cancelled out when VAR showed the toe of his boot was offside.

“You want the right decisions to be made and we’re happy they were made, because they weren’t being made without that help,” said United manager Ole Gunnar Solskjaer.

(Giroud’s effort), that’s offside. (Zouma’s) I just looked at the screen and it looks like a push in the back. So, for me, that’s not a goal.”

Chelsea only had themselves to blame though for their profligacy in front of goal. Until halftime they had looked the stronger side, forging a string of good attacking moves but, as has been their downfall all season, they failed to finish.

“If we’re not finishing chances it’s difficult to win games. We have 20 shots a game and then we don’t score. It’s very difficult,” said Chelsea manager Frank Lampard.

Reece James and Willian shot just wide and over the bar in the first 10 minutes while Batshuayi, playing instead of the injured Tammy Abraham, wasted a golden close-range opportunity from a neat Mason Mount pass in the 26th.

In the second half Batshuayi, Pedro and Willian all missed chances while Mount hit the post as Chelsea toiled in vain.