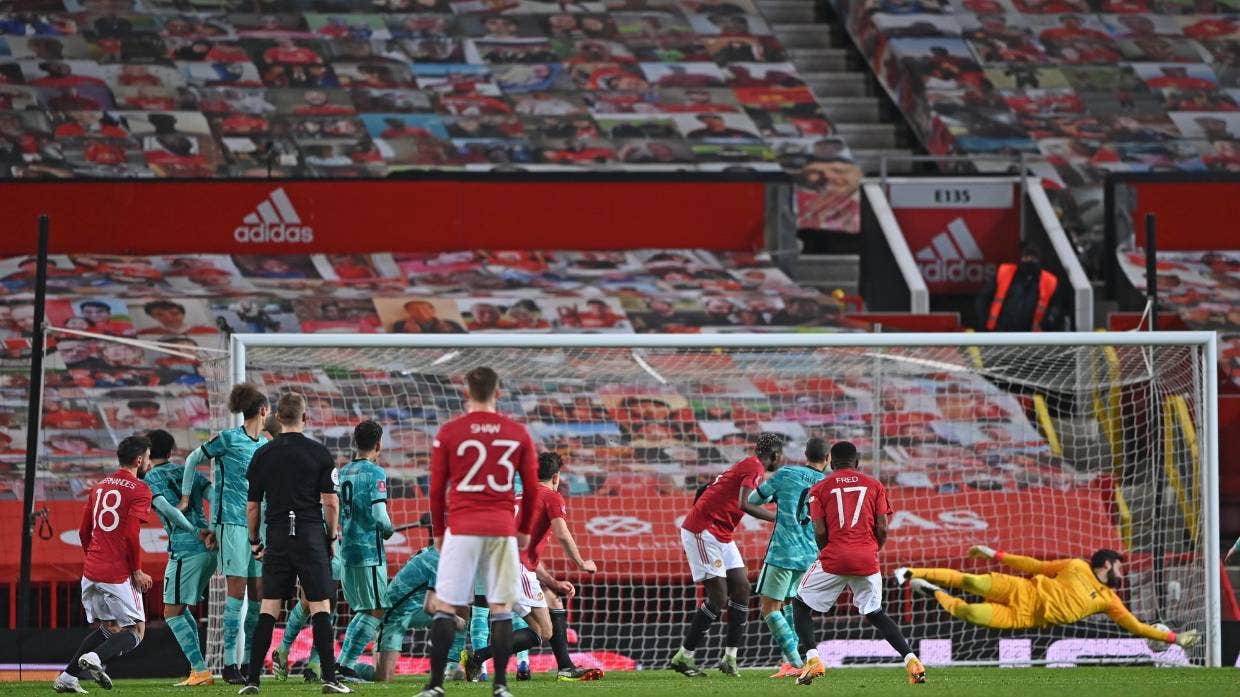 A scream from Andy Robertson was a forlorn attempt to distract Mason Greenwood beginning Manchester United’s comeback. The defender won’t be the only one shrieking at Liverpool after going out of the FA Cup.

Not that everything went wrong for Liverpool at Old Trafford, with Mohamed Salah scoring twice. The Liverpool striker’s opener was cancelled out by Greenwood and he levelled after Marcus Rashford put United in front. But Bruno Fernandes bent in a free kick in the 78th minute to send United into the fifth round with a 3-2 victory on Sunday.

“If you win a game there are negatives, if you lose a game too but I saw the boys really, really wanted it,” Liverpool manager Jürgen Klopp said. “We had problems on the counterattack. It was intense, but there were positives.”

Losing, though, compounded a miserable 70 hours that also saw Liverpool beaten at home by Burnley on Thursday in a further blow to their title defence. It was a 0-0 draw with United a week ago that helped United stay top of the league.

The excitement lacking in the Anfield league encounter was on show a week later at a freezing Old Trafford with the highest scoring match between these fiercest of English rivals since 2010.

United was joined by Chelsea, Leicester and Burnley on Sunday in advancing to the round of 16 where it will play West Ham next month.

Liverpool have gone 483 minutes without a league goal but remembered where the net is in the cup. Roberto Firmino thread a pass to Salah who lifted a shot over Dean Henderson from close range in the 18th minute.

But the lead lasted only six minutes. Paul Pogba’s tackle gained possession, Donny van de Beek released Rashford on the left flank by the halfway line and a diagonal pass landed perfectly at the feet of Greenwood.

The favour was returned three minutes into the second half.

Greenwood played in Rashford through the centre and the striker placed the ball in bottom corner for his 15th goal in all competitions this season.

But United were made to pay for their slackness.

A sideways pass from Edinson Cavani was too casual and was intercepted by James Milner. After passing to Firmino on the left of the penalty area, Milner was inside the box as the return pass came across. But Milner’s stepover let the ball roll through to Salah who squeezed a shot through Henderson’s legs.

The introduction of Fernandes was transformative – as so often since he arrived a year ago. Presented with a chance to grab a winner from a free kick, the Portugal midfielder seized it, bending the ball around the wall into the net.

Tammy Abraham scored a hat trick as Chelsea beat Luton 3-1 and Leicester had to come from behind against another second-tier club before ousting Brentford by the same score to reach the fifth round.

Abraham netted twice in a seven-minute span in the first half. Jordan Clark profited from the struggling Kepa Arrizabalaga’s latest goalkeeping error to reduce the deficit to 2-1 on the half-hour before Abraham struck again in the 74th minute, taking his season tally to 11.

Timo Werner missed a late penalty in a frustrating end to his afternoon. Chelsea will play another lower-league club, Barnsley, in the round of 16.

This victory was crucial for under-pressure manager Frank Lampard after five losses in the past eight Premier League games.

Lampard thanked the Chelsea fans who created a Stamford Bridge banner throwing their support behind his problematic managerial reign in west London.

Fans group ‘We Are The Shed’ created a banner reading “In Frank we trust. Then. Now. Forever” that was displayed for the first time in Sunday’s FA Cup clash with Luton.

“I knew about the banner maybe a week or two ago, directly from those who put it together, who are obviously massive supporters of this club and I was very appreciative,” said Lampard.

“I don’t know if emotional was the word, but people who know about how I feel about this club will understand, it’s a two-way thing from the first time I came here, maybe 20 years ago nearly.

“So I’m very thankful for that support, and it’s great to see it at the Bridge. I feel it very strongly indeed.

“I know the modern world has moved on with social media. There are eyes all over the world.

“But one thing I know is that when I’m at the Bridge, the fans have shown me huge support as a player, and now as manager here as well. So I appreciate it very much.

“All I want to do is repay that with being successful at the club, and working through a tough moment to bring a long-term success to the club.”

Brentford, who beat four Premier League teams on their way to this season’s League Cup semifinals, threatened another shock when they took the lead through Mads Bech Sorensen’s sixth-minute goal against Leicester.

But Leicester turned it around within six minutes at the start of the second half. James Maddison weaved through the Brentford defence to the edge of the area before teeing up Cengiz Under, who powerfully fired in the equalizer.

Youri Tielemans was tripped in the area by Tariqe Fosu and the Belgium midfielder netted from the penalty spot. Maddison killed it off in the 71st minute when he tapped in the rebound after Harvey Barnes’ shot was saved.

Jay Rodriguez struck twice for Burnley in a 3-0 win at Fulham – the 31-year-old striker’s first goals since July.

With just under 10 minutes left on the clock, Rodriguez turned provider for Kevin Long for the third.

Burnley boss rested All Whites striker Chris Wood, who was an unused substitute, alongside centreback and captain Ben Mee.