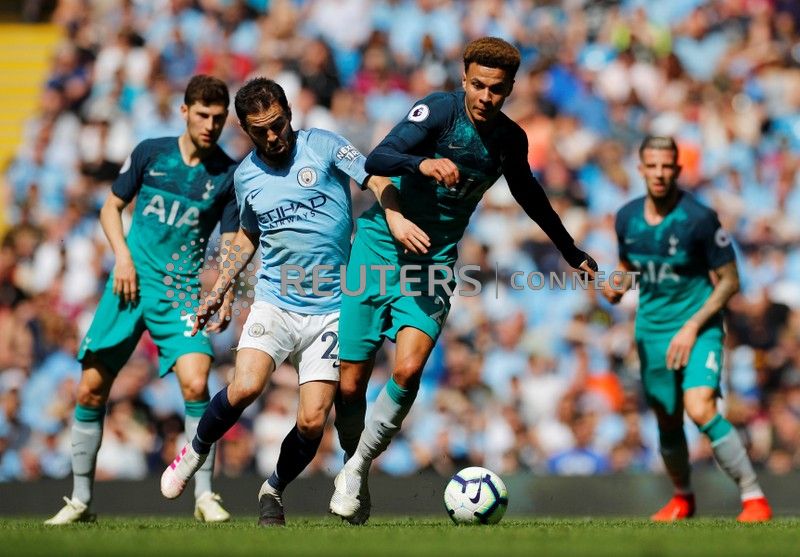 LONDON (Reuters) – Phil Foden’s first Premier League goal ensured Manchester City edged past Tottenham Hotspur 1-0 on Saturday to return to the top of the Premier League and avenge their Champions League elimination by Mauricio Pochettino’s side.

With Liverpool playing Cardiff on Sunday, City completed their 10th successive league win to move one point clear with four games left and remain masters of their own fate in what promises to be a thrilling finale to the title race.

However, their joy was muted by another injury to Kevin De Bruyne, who went off late in the first half and will almost certainly miss the midweek trip to Manchester United

Elsewhere, relegation-threatened Brighton & Hove Albion scraped a key point in a goalless draw at Wolverhampton Wanderers and relegated Fulham recorded their first away win of the season at Bournemouth.

Newcastle United erased any lingering relegation doubts as Ayoze Perez scored a hat-trick in a 3-1 victory over Southampton that lifted them 10 points clear of the drop zone.

City struck early when Foden headed home on five minutes after a clever ball back across goal from Sergio Aguero.

They struggled to assert themselves, however, against ever dangerous opponents who always looked capable of scoring with Son Heung-min twice free on goal and Christian Eriksen failing to make City pay.

The champions could have extended their lead in a fast-flowing game in which both keepers produced excellent saves, but there was to be no repeat of Wednesday’s thriller which City won 4-3 but went out of Europe on goal difference.

“It’s my first Premier League goal so it will live with me forever,” said Foden, who admitted he was surprised to be given the chance to start such a vital game.

Of De Bruyne, Guardiola said: “I don’t know — he’s played a lot of minutes without preparation. After injury they don’t train properly to be able to take a game every three days.”

Defeat may prove costly for third-placed Spurs who are struggling to hang on to their top-four place. Three points separate them from sixth-placed United, who have played one game fewer.

“It was an amazing game again,” Pochettino said. “It was tough again. Both teams competed really well and I think we deserved more. (City keeper) Ederson was man of the match.

“I am happy, disappointed with the result but so happy with the performance — we were always in the game.”

At Molineux, Brighton hardly oozed confidence after a run of four straight league defeats with no goals scored, but they scrambled a draw to go three points clear of Cardiff with four games remaining. Crucially, they also have a much better goal difference.

Fulham produced the shock of the afternoon by beating Bournemouth 1-0 at the Vitality Stadium — their second successive victory of an underwhelming season.

Aleksandar Mitrovic scored the winner from the penalty spot to ruin Eddie Howe’s 500th game as a manager.

Gerard Deulofeu scored an impressive double as FA Cup finalists Watford kept their European ambitions alive with a comfortable 2-1 victory over Huddersfield while Leicester City twice came from behind to draw 2-2 with West Ham United at London Stadium.

Jamie Vardy bagged their first equaliser with his 16th goal of the season before Harvey Barnes pounced in stoppage-time with his first goal for the Foxes.

Perez struck twice in three first-half minutes for Newcastle but Mario Lemina replied as Southampton threatened a comeback. Perez sealed the points late on to become the first Newcastle player to score a Premier League hat-trick since 2015.