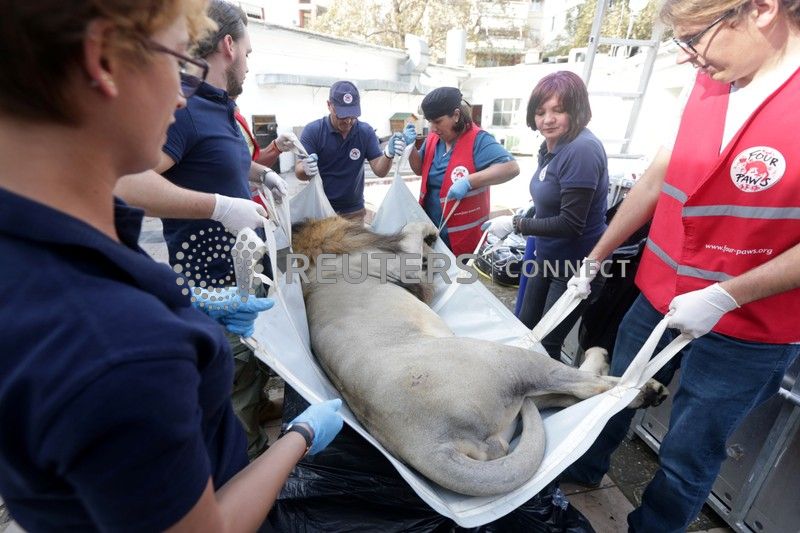 Welfare carry a lion before a surgical intervention in Tirana Zoo, Albania May 7, 2019. REUTERS/Florion Goga

TIRANA (Reuters) – Zhaku, Lenci and Bobby, three lions whose miserable plight in a private Albanian zoo stirred uproar and led the Albanian government to order their rescue, began their journey to a Dutch big cat center on Tuesday, from where they will hopefully be returned to the wild.

Pictures of a malnourished Lenci, with an infected, reddened and half-closed eye, which appeared in a British newspaper last October, piled pressure on the Albanian government to rescue the wild animals.

The father lion and his twin sons were kept in a zoo in Fier, southern Albania, in small cages without natural light, leaving them with enduring kidney, skin and teeth ailments.

“If they recover, as we hope, then maybe they will go to South Africa where we have a big sanctuary,” said Ioana Dungler of animal welfare group Four Paws.

The zoo has since been closed. Local media have reported it had no official designation as a zoo in the national register.

Albania, a NATO member and European Union membership candidate is one of the poorest countries in Europe so awareness of animal welfare can be low, said Dungler.

The lions were moved from Fier to a zoo in Tirana, where conditions were better, but still inappropriate for wild animals, she said.

“There is no sun, no shade, no rain on their skin, and this is not healthy for a wild animal,” she said, speaking by cages lined with ceramic tiles, reeking of urine.

Lenci has recovered his sight in his infected eye after an operation, though it will never be perfect.

An Albanian vet at Tirana zoo said he had grown close to Zhaku, the 13-year-old father, and taken good care of him, but he would have a better life in the Netherlands, he said, as the lions were sedated and carried off for their two-day road trip.