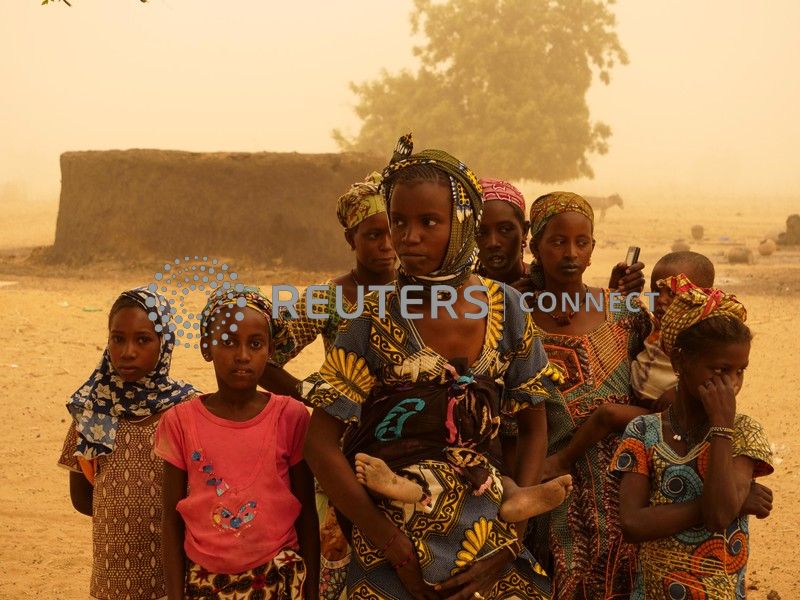 Villagers are seen following the March 23 attack by militiamen that killed about 160 Fulani people, in Ogossagou Village, Mali, March 31, 2019 in this handout picture obtained April 18, 2019. ICRC via REUTERS

DAKAR (Reuters) – Shortly after rolling into the central Malian town of Koro to detain a leader of an ethnic militia suspected of massacring about 160 villagers, a pickup truck of army soldiers was swarmed by hostile residents.

Video provided to Reuters by a senior member of the Dan Na Ambassagou militia appears to show the troops beating a retreat amid a hail of rocks and angry chants.

The episode last weekend, which was confirmed by a local mayor, was an embarrassing blow to the state’s authority in central Mali, where Islamist insurgents have been capitalising on spiralling communal conflicts to recruit new members and extend their reach.

Government and army spokespeople did not respond to repeated requests for comment about the incident in Koro.

Mali’s prime minister and his entire government resigned on Thursday after legislators discussed bringing a motion of no confidence because of the massacre and a failure to disarm militias or beat back militants.

Western governments, including former colonial power France and the United States, are alarmed by the rise of jihadist groups linked to al Qaeda and Islamic State in West Africa’s lawless Sahel region.

They have deployed thousands of elite troops there to make sure it does not become a new Islamist haven following the losses inflicted on the groups in the Middle East.

Governments across the Sahel have also tacitly outsourced part of the fight against jihadists to local self-defence groups, many of them intent chiefly on settling ethnic scores.

However, the killings of the villagers on March 23, Mali’s worst ethnic bloodletting in living memory, show what can go wrong when governments turn a blind eye to vigilante groups in order to repel jihadists.

Most of the deaths occurred in Ogossagou, where gunmen left the charred bodies of women and children smouldering in their homes.

The United Nations has sent rights experts to investigate the killings. The International Criminal Court said the crimes could fall under its jurisdiction.

Dan Na Ambassagou denies involvement in the killings and is refusing to lay down weapons it says it needs to defend Dogon farmers against jihadists, whose ranks consist largely of Fulanis.

“When there are two people who are in conflict … you can’t take the weapon from one and leave the other with his,” a senior militia member, Marcelin Guenguere, told Reuters on Wednesday.

Forcibly disarming Dan Na Ambassagou “could provoke a rebellion that will not be so easily contained”, he said.

The shaky footage provided by Guenguere purports to show dozens of people, some wearing floppy brown caps sported by Dogon hunters, yelling and gesticulating at the soldiers as they climb onto the back of the pickup and drive off.

Reuters could not independently authenticate the video.

But Moulaye Guindo, mayor of the nearby town of Bankass, confirmed that soldiers had tried to arrest the militia leader in Koro and withdrew when residents protested.

The government denies it coordinates with any militia.

Security Minister Salife Traore told parliament this month that some groups “thought they needed to fill in for the state”.

Researchers such as Human Rights Watch also say there is no proof of formal collaboration between Mali’s government and militias but, at the very least, there appear to be understandings that allow fighters to openly man checkpoints and defy bans on motorcycles.

The government denies this.

“We have always collaborated well with the Malian army and authorities,” Guenguere said, “but now we are starting to become a little disappointed.”

Jihadi attacks have multiplied in the region, spilling into neighbouring Burkina Faso and Niger despite the deployment of thousands of French soldiers to go after Islamist militants who briefly seized northern Mali in 2012.

The jihadis are adept at exploiting ethnic division, often siding with semi-nomadic Fulani pastoralists in conflicts with more settled farming peoples such as the Dogon over land rights.

The massacre of the Fulani villagers followed a deadly assault by jihadists on an army post that killed at least 23 soldiers, also in central Mali, an attack claimed by an al Qaeda affiliate.

So far, authorities have made five arrests. It was unclear if the attempt to apprehend militia leader Mamadou Guindo on Saturday was related.

“The events playing out in the centre of our country have reached an unacceptable dimension that cries out to us all,” President Keita said in a speech on Tuesday, saying new measures to counter militia violence were being implemented.