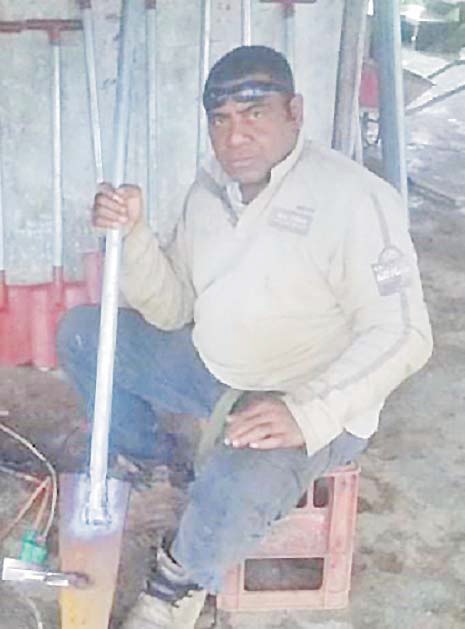 Sakiusa Ledua holds one of the spades he made at his home in Koronivia. Picture: SUPPLIED

SAKIUSA Ledua is using the skills he acquired while working at the Public Works Department to provide a living for his family.

The 54-year-old Raviravi, Matuku, native shelved a construction business he established after leaving the PWD and now focuses his attention on making gardening utensils.

He said poor health over the past few years had forced him to look for alternative means of income.

“I was born and raised in Suva and my father used to work at the Public Works Department,” he said.

The eldest in a family of seven, Mr Ledua attended Marcelin Primary School and concluded his studies at Nabua Fijian School.

From there, he joined the PWD when he was 18 years old. After two years of work, he met a woman from Namacu, Koro, and married her.

They had two children and after some misunderstanding, decided to go their separate ways.

Mr Ledua said life was tough after he parted with his wife and children. The emotional issues combined with a search for greener pastures prompted him to leave the PWD and join Fletcher Construction and other building firms.

“I met a woman from Kadavu and we immediately hit it off and to cut a long story short she is now the mother of my four children.”

Mr Ledua said with the knowledge and experience acquired from his work in the building business, he decided to establish his own construction company – Josaia Ledua Builders.

“My company was doing very well until the COVID-19 pandemic hit Fiji and the movement restrictions and curfew that followed.

“It was one of the hardest and toughest moments in my life because I had to struggle to feed my family and to meet our daily needs.”

Mr Ledua said he turned to farming because there was no other option available to him.

“I knew that the crops would take some time to mature, so I began looking for some other means of earning an income.

“My landlord has a garage so I spoke to him and asked for some unused steel to make gardening tools.

“Because I”m a builder and welder, I decided to use my talent when the going got tough.

“I began with two digging springs and posted pictures of them on Facebook.”

Mr Ledua said calls started pouring in from all over the country.

“People were asking after the price and they also gave orders for garden folks, spades and other garden tools.

“I quit building houses because it was hard for me due to my health issues and age was also catching up with me.

“So I made the move to concentrate on garden tools and so far it has worked out very well.”