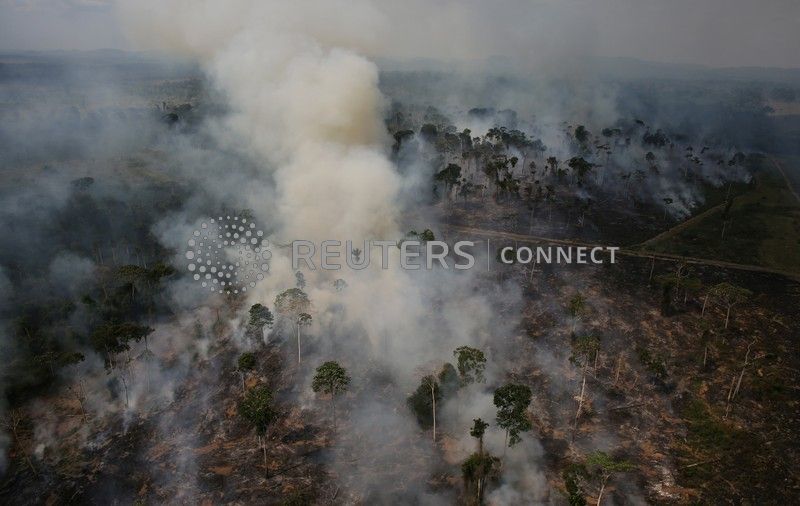 An aerial view of a tract of Amazon jungle burning as it is being cleared by loggers and farmers near the city of Novo Progresso, Para state, Brazil, September 24, 2013. REUTERS/Nacho Doce/Files

OSLO (Reuters) – Norway has expressed alarm over accelerating destruction of the Amazon and concern for the future of a Brazilian rainforest protection fund it has given $1.2 billion to in the last decade.

Deforestation in Brazil’s portion of the Amazon soared more than 88% in June compared to the same month a year ago, the second-consecutive month of rising destruction under new right-wing President Jair Bolsonaro.

“We are worried about the recent developments in Brazil and reports on increased deforestation in the Amazon,” the Norwegian Climate and Environment Ministry said late on Thursday.

The Nordic country has made the lion’s share of contributions to Brazil’s Amazon Fund. Germany has paid $68 million, with another $100 million in the pipeline from donors who make contributions based on Brazil’s record.

“Norway’s goal is to continue the partnership, even though we realize that the termination of the fund also is a possible outcome,” the ministry’s statement added, noting Brazil’s emission reduction goals under the Paris climate pact.

Brazil is home to 60% of the Amazon, the world’s largest tropical forest, which is vital to countering global warming.

The Norwegian and German ambassadors met with Brazil’s Environment Minister Ricardo Salles, a climate change sceptic, on Wednesday to talk about the Amazon Fund, the statement said.

Environmentalists say Bolsonaro’s strong remarks calling for development of the Amazon and criticising environmental enforcement agency Ibama for handing out too many fines would embolden loggers and ranchers seeking profit from deforestation.

Salles has said that Brazil will overhaul rules for selecting projects supported by the Amazon Fund, after discovering irregularities in spending.

“From Norway’s point of view, the Amazon fund has worked well until now,” the climate ministry’s statement said.

“It would be a setback if the fund, which has been an important inspiration to other tropical forest countries, is terminated. Entering a form of cooperation with Brazil that weakens the foundation of our partnership is not an option.”