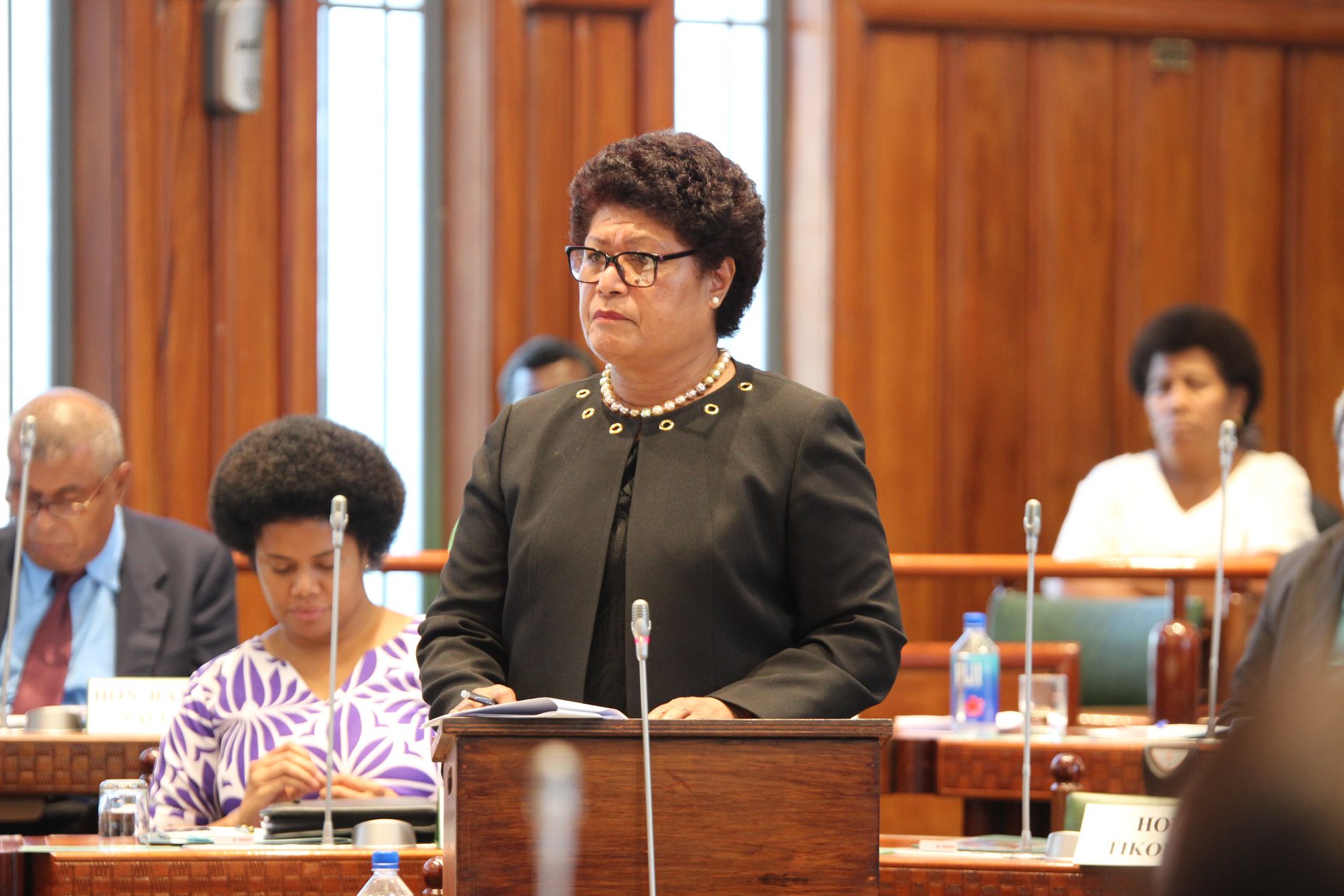 Firstly I thank God almighty and his son, Jesus Christ for the gift of life, his abundant blessings and especially this opportunity, and I am honored and privileged to be in Parliament for a second term.

I join previous speakers in congratulating you, for your re appointment and Hon Veena Bhatnagar as your Deputy.   And we look forward to you upholding in this House the high standards that the people of Fiji demand and likewise, we on this side of the House look forward to a more enabling environment for effective debate.

I am also happy to note the steady increase in the number of women in the House, and Congratulations to the 10 Women Members of Parliament and I look forward to working with you all in championing issues to boost the development and empowerment of women.

I also acknowledge and thank my Party SODELPA for the confidence it has placed in me. In particular I extend a big Vinakavakalevu to the Party President Hon. Rt Naiqama Lalabalavu and to the Party Leader and Leader of Opposition Hon. Sitiveni Rabuka for their leadership and tremendous efforts during election campaign that resulted in the shift of the 6 seats from FF to SODELPA.

In this journey, Our families make the greatest commitment and sacrifice and for that I  thank my best friend and husband Kitione and who has been my greatest practical support.   To my sons Viliame, Nia and Pate with your dear families thank you for your many sacrifices you had to make on my behalf and to my 7 little heartbeats thank you for the love and laughter which has kept me grounded especially when the going gets tough.

I also thank my sister Meme for joining me in Fiji during election time, my brother Anare for running the campaign team in Vanua Balavu, Tia and Seini, even though abroad, your support was always timely.

I also pay tribute to my late parents for the upbringing built on strong Christian principles and my early childhood days spent  in Tacilevu, Bouma, Tukavesi, Buretu and Noco where my Ta taught as a primary school teacher.

I also acknowledge my teachers at Adi Cakobau School, the early sisterhood formed at Sawani and later Old Girls network that has had a strong influence to what I am to day. Special Thank you to my classmates and  especially those overseas : Kesa, Tuina, Harietta and Elenoa.

I got my seat back in Parliament with a lot of help from various people. And I like to acknowledge and sincerely thank the following:

May I also thank HE The President for his address in opening this new Parliamentary session on Monday and which gave us a lot of food for thought.  May I respond on the following issues.

It has been said that the 2018 Election was free and fair, but this is far from the truth because of the following:

This is far from the truth due to the following reasons:

To make real progress in our Parliamentary Democracy in this House we must bring back the original 2014 version of the Standing Orders which allows for peoples voices to be properly heard for example through “Petitions” being referred to Standing Committees and whereby peoples concerns are addressed and their priorities aligned and become the Government’s priorities in the developmental agenda.

I acknowledge the efforts by the Ministry in addressing “Elimination Of Violence Against Women” and right now the observation of 16 days of activism.

And despite legislations, policies and programs in place, unfortunately, Violence Against Women and children continue to rise and I call on the Government to do much more to counter this nagging issue.

And in this regards I urge Government to establish a “Commission of Inquiry”  on Elimination of Violence Against Women and Children.  And I also call on the Members on both sides of the House to unite and support this proposal.

Being a former career civil servant, it saddens me to witness the way the civil servants are being badly treated.

These are some of the things Civil servants care about and I urge Government to seriously look into them otherwise these work conditions create a very bleak future for civil servants.

The Government claims that there is high economic growth and I quote ….” We see that prosperity in the record nine straight years that our economy has grown and tens of thousands new jobs we have created.”

When those that have formal qualifications cant find jobs, we can only imagine the huge number of unemployed school leavers out there.

May I remind the Government side to stop talking about reduction in unemployment rates and talk about new employment policies and programs that will create jobs for graduates and youths generally.

It must also be noted that the $1,000 and all these “Care programs” that has been dished out like nobody’s business on the eve of Election is just a “vote buying exercise “ by this FF Government.  It is grossly insufficient to set up viable small business and is also counter productive strategy in building a better Fiji .

They said that the YES program has helped many youths and now the qualifying age has been increased to 40 years but there was no mention of any statistics to substantiate their claim.

Let me share the FNPF story to shed more light on unemployment and the subsequent financial burden that will have to be addressed by this and future Government.

A lot has been said about free transport for school children but this can only be true for the children of Savutalele, Veikoba, Rokara Road communities in Kalabu and I ask the Minister for Infrastructure when will these roads (which were constructed by previous Govts) be expanded to allow for bus services to reach them otherwise these children will always be left behind.

Yesterday the Hon. Assistant Minister said a lot about  Infrastructure development so let ask him  when will the bridges (again built by previous Govts) in Veikoba and Vesida HART will be upgraded because whenever there is heavy rain and flooding the people and especially school children are placed at very high risk.

In the recent past students at Tacirua Primary School have been involved in accidents due the absence of road humps and student crossing signs and even though I had highlighted this in previous sitting still nothing has been done.  So I urge the new Ministers for Infrastructure and Education to urgently look into this issue to avoid any further fatalities.

A lot has also been said about accessible clean water supply for everyone.  But there is a beautiful island called Yacata Island who are also the traditional owners of Kaibo island where the Kaibo resort is located and where the Prince Harry, the Duke of Sussex and beautiful wife holidayed whilst visiting Fiji.  But people of Yacata have struggled for a long time without piped water supply because this FF Govt. has not made any efforts to replace the Water pump which was installed by previous Govts.

TC Winston in March 2016 destroyed the Yacata District School and Avea District School and now after more 2 and half years on, may I ask the  Minister for Education when will the construction work be completed otherwise the students, teachers and communities as a whole are being left behind.

The Vanua Balavu jetty underwent temporary repairworks in 2015 and until today no other works has been carried out.  And may I request the Minister for Infrastructure to urgently look into this and also the Jetty in Cicia.

Waste Management is a real big big problem in the Nasinu / Nausori corridor.  I acknowledge the efforts done by the former Minister whereby the Tacirua Heights problem was partly resolved, we still waiting for the monthly or quarterly removal of “white goods waste”. Otherwise the bigger and wider Nasinu / Nausori corridor still suffers from unreliable proper waste management system. And this could due to the problematic legislations, Organisational structure and budget of municipal councils.

And In regards I urge the Government to conduct the Municipal elections as soon as possible which this same Government promised but did not deliver in the last 4 years.

I would like the share words of John Wesley and which the Leader of Opposition Hon. Rabuka always remind us with and that is:

“DO ALL THE GOOD YOU CAN, BY ALL THE MEANS YOU CAN, IN ALL THE WAYS YOU CAN. TO ALL THE PEOPLE YOU CAN. AS LONG AS YOU EVER CAN.”

I hope and trust that is a genuine reminder to us as Members of Parliament in our journey to serve the people of Fiji.

And I wish all of us, our families and Fiji  a very Merry Christmas and a Prosperous New Year.

I thank the House for your indulgence.