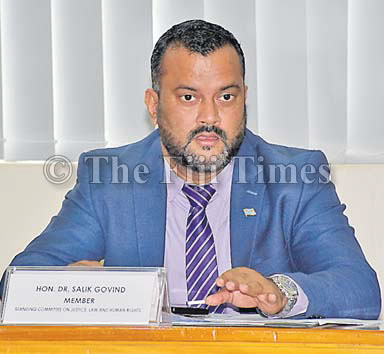 He said on their first round of public consultations in the Western Division, people had expressed their appreciation of the Bill.

“We received some good suggestions on the National Payment System Bill because what people have been complaining about is that there has been some forgery taking place when they are transferring money and then nobody is taking ownership of it,” he said.

“There have been several complaints to the companies facilitating these transfers but there are no laws governing these bodies to make them accountable.

“So people are appreciative of the fact that Government is bringing in this particular Bill so that they can have peace of mind when they are transferring money that their money is secure.”

He said the Bill would also ensure an enquiry would be launched into missing funds.

“Even in the process of the transfer and the money gets lost, there is an avenue to go and actually retrieve that money from the service provider “So a service provider, for example, Vodafone, has been doing M-PAiSA for a while now but there wasn’t any regulation around it, which has been welcomed from those that have made submissions so far.”

The standing committee will be at the Lautoka City Council chambers today from 10am to midday.