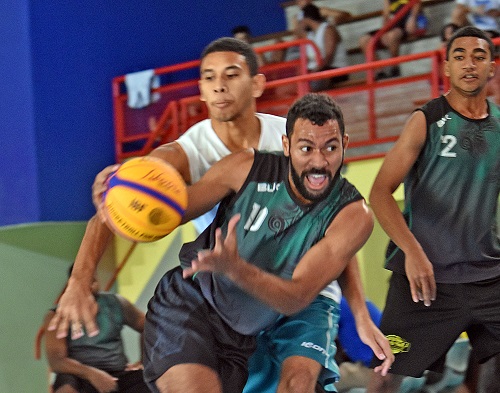 William Peter of Onyx on attack against Swish during the 3x3 Baketball competition at the Yat Sen Secondary School hall in Suva on Monday, September 09, 2019. Picture: JONACANI LALAKOBAU

MAGPIES came out victorious in the 3×3 Zodiac Challenge after defeating Onyx 12-9 in the open men’s final at the Yat Sen Secondary School hall in Flagstaff, Suva on Monday night.

In the women’s division, Crossroads defeated Valkyries 10-4 while in the U19 boys division; Young Bulls defeated Bulls 8-5.

Twenty-eight teams were part of the tournament with 13 U19 teams, 11 men’s teams and four women’s team.

Zodiac club head coach William Peter said the tournament gave a different theme this year by playing the 3×3 code instead of the traditional 5×5.

“This year we wanted to change it and make it a 3×3 tournament because obviously it’s a new code of basketball and something Fiji Basketball is trying to promote in the country and to the young basketballers,” said Peter.

“We are dedicated to helping Basketball Fiji in promoting the code and actually just organising more competitions to help in the sport and development of the players,” he added.

The tournament ended on Monday with Magpies defeating Onyx in the open men’s final 12-9 to win the Zodiac 3×3 Basketball Challenge.