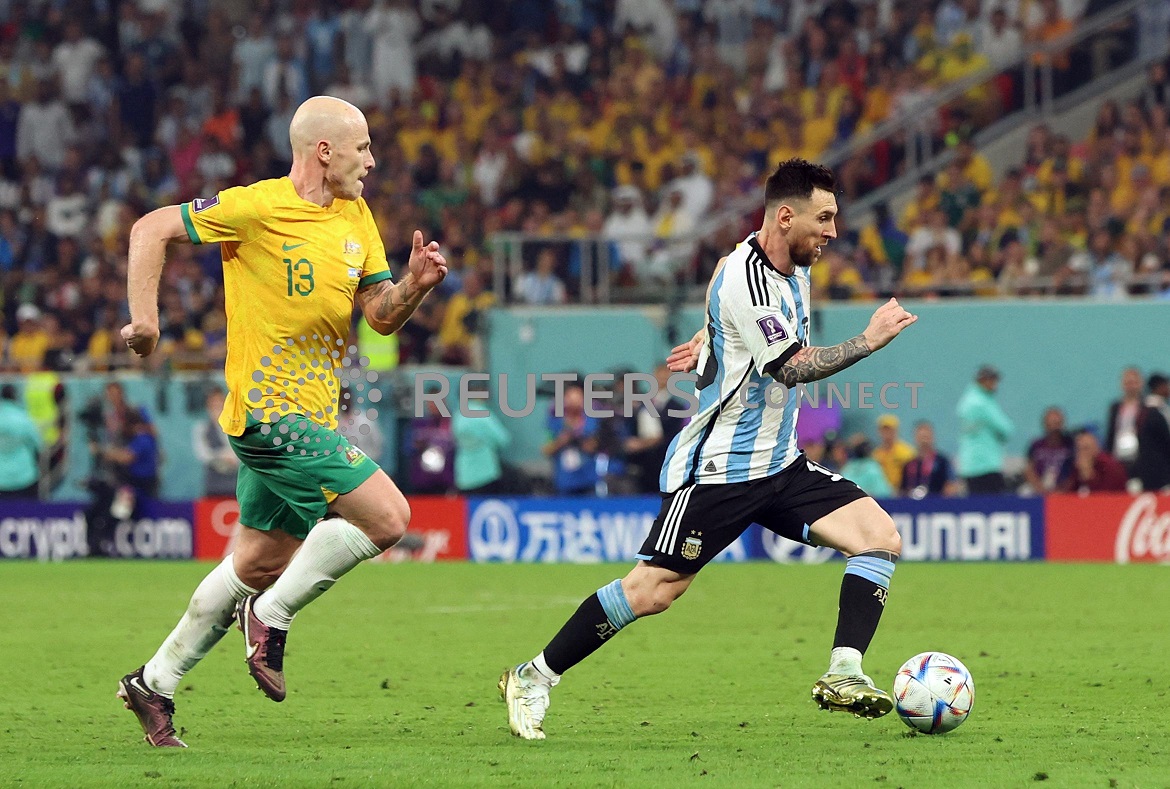 AL RAYYAN, Qatar (Reuters) -Lionel Messi scored his first goal in a World Cup knockout round in his 1,000th match to beat Diego Maradona’s tournament tally, as Argentina beat off a frenzied Australia fightback to win 2-1 on Saturday and reach the quarter-finals.

Messi his side ahead after 35 minutes with a coolly taken low strike for his 94th international goal, passing the great Maradona’s eight World Cup goals, in a match where he was instrumental in almost every Argentine attack.

Julian Alvarez made it two near the hour mark after pouncing on a howler by keeper Mat Ryan to set up a mouth-watering last-eight clash next Friday with the Netherlands, who beat the United States 3-1 earlier in the day.

With nothing to lose, the Socceroos, chasing a first World Cup quarter-final berth, pulled a goal back 13 minutes from time when Craig Goodwin’s wayward shot took a huge deflection off Enzo Fernandez and flew into the net for an own goal.

Messi spurned two clear chances late on but it was Australia’s teenaged substitute Garang Kuol who set hearts racing in the stadium when deep into stoppage time his close-range shot on the turn was brilliantly saved by Emi Martinez.

The Australia bench had their heads in their hands as the final whistle blew moments later, sparking fervent celebrations from the Argentina squad and roars around the packed Ahmad Bin Ali Stadium.

Man of the match Messi admitted the final moments were tense.

“Things got complicated in the end with their goal but it’s a World Cup and it’s never easy,” Messi said.

“Now we have a really tough clash with Holland, who play very well. They have great players and a great coach, it’s going to be hard-fought.

“If a World Cup has been tough from the start, it gets even tougher at this stage.”

Argentina took a while to find their stride in a physical match that started off scrappy, with Alejandro Gomez, Fernandez and Alvarez combining well but unable to break down a resolute defence as Messi struggled to make his mark.

Australia had a chance from a corner when towering defender Harry Souttar leapt high in the area but headed tamely.

Lifted throughout by the overwhelmingly Argentine support, which cheered, sang and bounced in unison from all sides of the stadium, Argentina finally made the breakthrough after 35 minutes with Messi the creator and finisher of a superbly worked goal delivered at breathtaking speed.

He took a free kick then picked out Alexis Mac Allister, who passed to Nicolas Otamendi to tap gently back into the path of Messi, who fired low into the corner and beyond the reach of the outstretched Ryan.

Argentina got their second close to the hour after a huge back-pass blunder from Ryan, who came under pressure from Rodrigo De Paul and was robbed of the ball by Alvarez, who turned and slotted home.

Australia refused to give up and launched a succession of threatening moves that rattled an Argentina side whose attention was focused more on their own attacks.

After Goodwin’s deflected shot went in there was a real prospect of extra time in a stadium where the Socceroos had booked their World Cup place via a penalty shootout win over Peru in an intercontinental playoff earlier this year.

They pushed forward relentlessly and nearly equalised when Aziz Behich darted dangerously into the area before a brilliant saving tackle by Lisandro Martinez.

“We took it to them. I felt that we finished off well. We had a great chance at the end there to equalise,” said Australia coach Graham Arnold, who described Messi’s performance as “incredible”.

Argentina defender Nahuel Molina said the win was all about Messi. “It’s a privilege to play with Messi, with him on the pitch we know that we just need to be patient because he is our ace in our sleeves.”