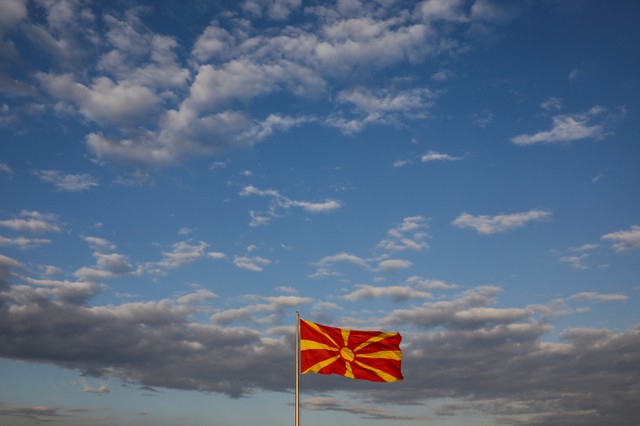 FILE PHOTO: A Macedonian flag flutters on one day before the referendum on changing the country's name that would open the way for it to join NATO and the European Union, in Skopje, Macedonia September 29, 2018. REUTERS/Marko Djurica/File Photo

ATHENS (Reuters) – Greek Prime Minister Alexis Tsipras said on Saturday theapproval by Macedonia’s parliament of a proposal to change the country’s name paves the way for an historic deal between the two countries.

“Today is a symbolic and historic day after the decision at the Skopje’s parliament which opens the way for the implementation of the accord,” Tsipras said at a ceremony taking over the foreign affairs portfolio.

He said implementation of the accord would also allow the small Balkan state to join international organisations, referring to the European Union and NATO.

Macedonia’s parliament on Friday approved a proposal to change the country’s name, bringing a decades-old dispute with Greece one step closer to being resolved. The proposed new name is Republic of North Macedonia.

Athens has insisted on the name change because it views the name ‘Macedonia’ as implying a territorial claim on a northern Greek region of the same name.

Tsipras has taken on the foreign minister role after Nikos Kotzias, Greece’s main negotiator in talks that led to the deal, resigned unexpectedly from government.

Kotzias stepped down following a row with Defence Minister Panos Kammenos during a cabinet meeting on Tuesday.

Kammenos is head of the co-ruling right-wing Independent Greeks party, which with Tsipras’s leftist Syriza party has a slim majority in the country’s 300-seat parliament.

He has called the deal a national sell-out and has threatened to resign if the deal comes to the Greek parliament.