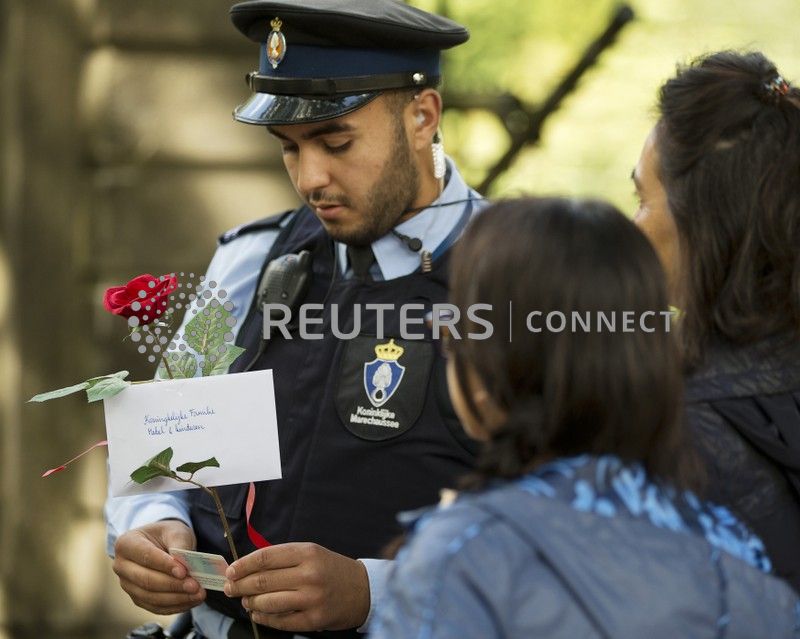 FILE PHOTO: A guard checks the identity card of a woman who gave a red rose and an envelope for the royal family the day after Prince Johan Friso of the Netherlands died, at the gate of the Royal Palace Huis Ten Bosch in The Hague August 13, 2013. REUTERS/Michael Kooren

(Thomson Reuters Foundation) – As countries around the world debate the vexed issue of how to reflect gender in official documents, the Netherlands is looking at a more radical solution – doing away with it altogether.

The proposal to remove the category from Dutch identity cards by 2025 came in a letter to parliament this month and is part of a government plan to “limit unnecessary sex registration where possible”.

It has been welcomed by advocates for LGBT+ rights, who say removing the sex category would make life easier for transgender, intersex and non-binary people, who do not identify as a man or woman.

“It is a good thing that the government is not registering that much what is in our underpants,” said Brand Berghouwer, the chair of advocacy group Transgender Netwerk Nederland.

“It is a good way to give people a little bit more freedom to be who they are.”

Berghouwer said not having a gender marker would have saved him anxiety when he was transitioning, but acknowledged that many trans people are “very proud of the new letter on their IDs and they don’t want to lose that”.

The Netherlands is seen as one of the most progressive countries globally for LGBT+ rights, having legalised same-sex marriage in 2001.

If it goes ahead it will be one of only a handful of countries with no gender on their identity cards, including Germany, Italy and Serbia, whose cards have never featured it.

The sex category on passports was only introduced in 1974 when the International Civil Aviation Organisation said the rise “unisex attire and hairstyles” meant photographs had become a less reliable way of ascertaining a traveller’s sex.

Since then, countries including the Netherlands, Germany, Pakistan and Nepal have introduced third gender options for identity documents, including “X” for passports.

Sex was introduced on birth certificates in civil law jurisdictions in the early 19th century because of Napoleon Bonaparte.

The French ruler “wanted to know how many soldiers he could count on in the future,” van den Brink said, while it also enforced different rights for men and women.

“It’s such a matter of course that we divide people into male or female,” she said.

Between five and 10 people in the Netherlands now have “X” on their birth certificates and passports after going to court, said Bente Keulen, national policy officer at NNID, an intersex advocacy group.

The government is waiting for more court cases before it introduces legislation, according to the minister’s letter to parliament.

“I think they should hurry up,” Keulen said, adding that while the preference is for no sex on birth certificates either, “X” was a “good thing” for now.

While countries like the Netherlands are moving to less traditional models for identity documents, others are enforcing distinctions between men and women, as far-right and religious conservatives campaign against what they call “gender ideology”.

Hungary banned people from legally changing gender in May, in a move LGBT+ advocates said created panic among trans people, while the U.S. state of Idaho banned trans people from changing their birth certificates in March.

Recording gender could be important for tracking gender-based violence, for example, said Jabulani Pereira, the chair of the trans steering committee at global advocacy group ILGA.

But, he argued, it was mostly unnecessary.