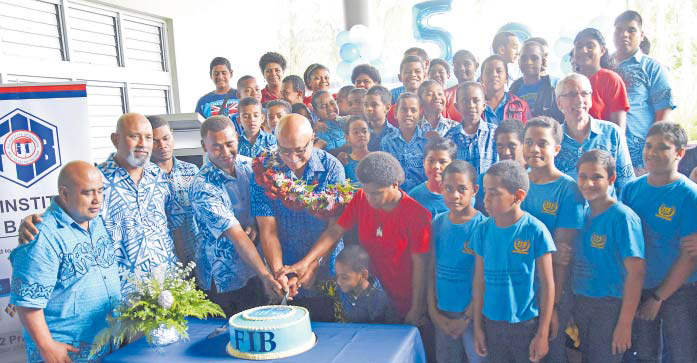 President Jioji Konrote cuts the celebratory cake as students from Dilkusha Home, Gospel School for the Deaf, Chevalier Boys (Wainadoi), the Home of Compassion Dilkusha Home and members of the Fiji Institute of bankers look on. Picture: LUKE RAWALAI

About 100 children three orphanages were hosted to lunch by the Fiji Institute of Bankers (FIB) yesterday.

The “Kanavata lunch” was part of the commemoration of Fiji’s 50th independence anniversary.

It included children from Dilkusha Home, Gospel School for the Deaf, Chevalier Boys, Home of Compassion and also students of Montfort Boys Town.

The President, Jioji Konrote, while officiating as chief guest, said the event was important because it would also remind underprivileged children who were present that they were part of a nation that cared for everyone.

Mr Konrote said unity in a nation was important and one of his main roles was to ensure that it existed.

“As the President, my job is to try and unite the nation,” he said.

“This is in line with my promise to the chief and the people of Levuka about two weeks ago when we began the nationwide celebrations.

“No one and no community should be left behind while the rest of the nation celebrates.”

Meanwhile, Fiji Institute of Bankers president Saud Minam said inviting children to be part of the event was fitting as it corresponded with Fiji’s official 50th birthday song: “Children of Fiji”.

Mr Minam also acknowledged members of the Fiji Institute of Bankers during the event and said their work and dedication during this pandemic was commendable.

The event took place at Albert Park in Suva yesterday.