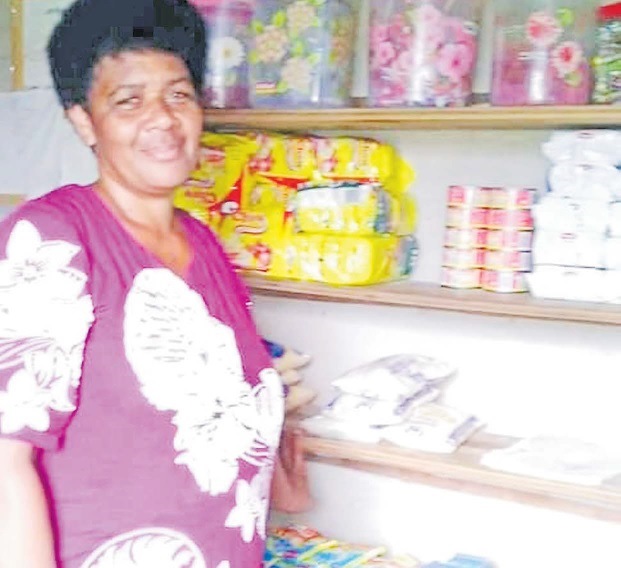 Luisa Tiritirisamu at her canteen. She also operates a piggery to support her family after her husband was medically unfit to continue working. Picture: UNAISI RATUBALAVU

To survive in the communal setting, people must be ready to put in the hard yards to ensure vanua, church and family obligations are met.

Luisa Tiritirisamu of Narocake, Noco, Rewa, said with that in mind, she established a small canteen and a piggery after her husband resigned from the Water Authority of Fiji last year due to ill health.

Ms Tiritirisamu was born and raised in Narocake and attended Ratu Sauvolli Primary School from Class 1 to Class 8.

“I continued my studies at Nabua Secondary School up to Form 4 and then got married after,” the 42-year-old said.

When her husband, Jale, was forced to leave work, Ms Tiritirisamu said she kept the family surviving by establishing two businesses.

“I started with only $83 to open a canteen selling noodles, biscuits and tinned tuna.

“I open from 8am to 6pm from Monday to Saturday and business has been going well.

“The piggery is also a good business because each piglet fetches around $50.

“But if you sell matured pigs for traditional functions they can fetch around $500 depending on the size.”

Ms Tiritirisamu said after she overcame the hurdles and obtained a business licence in March last year, she was faced with the daily challenges of operating a canteen in the village.

“It’s not easy and I have to be firm sometimes especially dealing with fellow villagers. It requires a lot of discipline and I have worked out exactly what I need to supply a canteen in the village.

She said she learnt the intricacies of running a business while in the job and with her earnings, she takes care of her three children and a grandson.

She said the pandemic had taught Fijians a lot lessons, but the most important was to be as self-sufficient by having a steady supply of produce from your own garden.

“And another important lesson is being able to be financially independent.

“My advice to women in my situation, who live in the village, is that we have to think of ways to help our husbands.

“We have to be proactive. If your husband is the sole breadwinner, that doesn’t mean you can relax. Think of something you can do to support him and your family.”