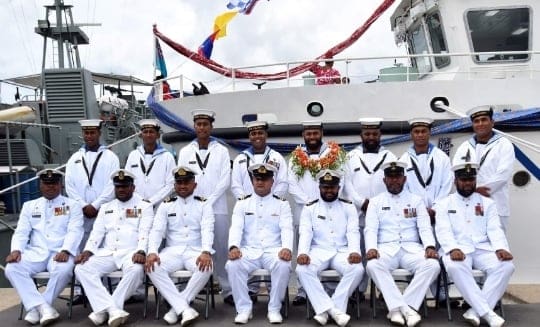 WITH more than a decade of experience in the Fiji Navy, Lieutenant Jervis Marvin Robinson has been appointed as the Commanding Officer of the new research vessel RFNS Volasiga.

The vessel that was acquired at approximately $6.5m from the Korean government was commissioned by Acting Minister for Defence and National Security Mahendra Reddy at the Stanley Brown Naval Base at Walu Bay, Suva, today.

The former student of Natabua High School in Lautoka had undergone hydrographic survey training in countries like India, Korea,  Australia, Malaysia, and the United Kingdom, and became the first Fiji Navy officer to graduate with a first-class pass and Masters in Hydrography from Plymouth University.

“As the commanding officer, my responsibility is the safety of the ship, safety of the crew and management of the state-of-the-art equipment on board the RFNS Volasiga,” Lt Robinson said.

“The crew will be undergoing a training program to familiarise them on new equipment on the ship, and it will be fully operational within the next three to four months.

“We have a large area of EZZ (economic exclusive zone) and that is the workload on the Fiji Hydrographic office. So it is the role of the crew on board the RFNS Volasiga to carry out surveys of the Fiji waters to the required standard and update the nautical outdated charts.”

Lt Robinson will be commanding 15 Navy personnel on board the vessel.

And as part of his responsibility, he will also oversee the role of chart surveyor.