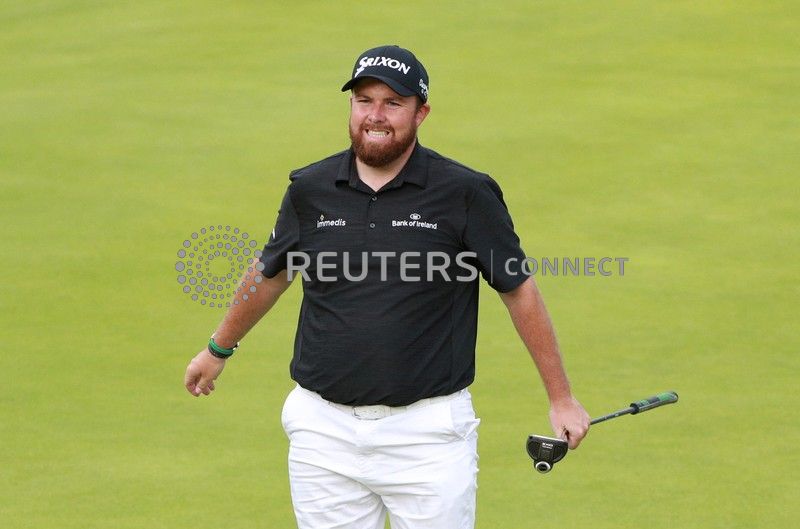 PORTRUSH, Northern Ireland (Reuters) – If there were any nerves concealed behind Shane Lowry’s thick beard they had no impact on his golf as the Irishman took the British Open by the scruff of the neck with a sensational course record in Saturday’s third round.

On a day ripe for scoring on a becalmed Dunluce links, joint overnight leader Lowry provoked a chorus of roars from the galleries that had flocked to the Antrim coast as he moved four shots clear of Tommy Fleetwood with an eight-under 63.

Several other players, notably Englishman Fleetwood, tucked into the third-day birdie-feast but they could not keep pace with the 32-year-old from across the border.

Rory McIlroy may have disappointed the huge sell-out crowds by missing the cut for the weekend, but in his place Lowry has become the focus of adoration from the supporters.

As he walked down the approach to the 18th green, he was given a standing ovation and the chanting of his name continued long after he had left the course.

“My mind is still a bit fuzzy, I just really enjoyed it today,” Lowry, from County Offaly, said. “I played great golf, the crowd were incredible and I just felt so comfortable.

“Tomorrow it’s going to be tough but there is nowhere I would rather be. A four-shot lead in the Open, in Ireland.”

Fleetwood, who had been calmness personified throughout the day, was left wondering quite how his near-perfect round of 66 had left him trailing the leader by four shots.

“You can easily get frustrated because Shane is doing so well and how well he’s playing,” said the Lancastrian.

“But you have to look at it realistically. I had a great day today. I had one of the best rounds of the day and I was bogey-free. Shane just played great and I’m four back. But that’s it, I’m just happy with how I played.”

It was a day of outstanding golf from the two leaders but also from the chasing pack with J.B Holmes (69) in third place, six strokes behind Lowry and Brooks Koepka (67) and Justin Rose (68), both seven off the lead.

With rain and high winds forecast for Sunday, all will feel they still have a chance — if Lowry stumbles.

Beginning the day tied on eight under with Holmes, Lowry birdied the third, fifth and ninth going out and then moved into the outright lead with a birdie at the 10th following a magical seven-iron approach from the rough after a rare wayward tee shot.

Fleetwood, playing one hole ahead with compatriot Lee Westwood, was also in scintillating form but having reached 12 under with a birdie on the 12th he could make no more inroads.

Lowry, whose previous best in a major was tied for second at the 2016 U.S. Open, had missed four consecutive cuts at the British Open but is now well placed for a remarkable victory.

Having grabbed the lead he birdied the 15th and then a superb tee shot at the par-three 16th named ‘Calamity’ saw him sink another one.

Cries of “Ole Ole” broke out as Lowry then nailed his approach on the 17th before another birdie dropped.

He almost sunk his birdie putt on the 18th too, which would have given him a record-equalling 62 for a round at a major, a mark set by Branden Grace at the 2017 Open, and wore a grin as wide as the fairway as he walked off.

Fleetwood will still believe he can catch Lowry and win his first major on Sunday after a blemish-free third round.

Westwood, 46, began his third round with some outstanding ball-striking — making three successive birdies and briefly topped the leaderboard but he fell away and finished on eight under after a disappointing 70.

Holmes would probably have settled for a round of 69 when he awoke on Saturday, but it left him six off Lowry’s searing pace.

Earlier, England’s Danny Willett took the clubhouse lead with a sizzling six-under 65 to reach seven under, before American Rickie Fowler, still seeking a first major after regularly knocking on the door, moved to eight under with a 66.

Defending champion Francesco Molinari’s hopes of retaining the title look over after he could only manage a one-over 72 to leave himself two over going into the final day.