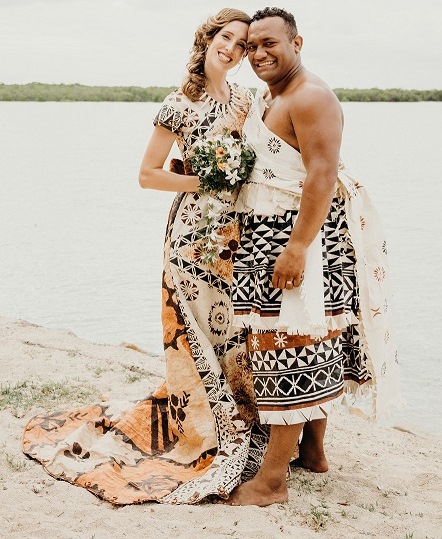 A wedding to remember ... Meli and Jennifer during their wedding day. Picture: SUPPLIED

Q Tell us a little bit about yourselves? Meli: I hail from the chiefly island of Lakeba in the province of Lau and I grew up in the beautiful mountains of Tavua because my mum is from the village of Tavua, from the Telawa family. I am a missionary based in Cambodia where I teach English and God’s word to the children of Cambodia. Jennifer: My name is Jennifer (Jenna) Ruth Robinson (now Tuilakeba). I was born in New Zealand but my father is from the US and my mother is Dutch/Kiwi. We moved to the south of England when I was young and I lived there most of my life. With extended family in various countries in the world, I grew up traveling regularly so when I was old enough to go off alone it was natural for me to keep travelling and going to new places. I spent time in China and Hong Kong before university and then after uni a year in Vietnam teaching. I then went back to New Zealand to do my secondary teacher training at Auckland University. After that I taught in England for a while but soon felt the pull to go far and wide again. I had visited Cambodia before and found it a very beautiful and interesting country, so I began looking for teaching jobs there in 2016. When I applied to Asian Hope International School, a Christian NGO organisation in Phnom Penh, I felt that was where God was leading me so I accepted the role of grade seven and eight teacher and moved there.

2. How did you two meet? Do you remember the first thing you said to one another when you two met? Jennifer: It was only a month or so after I arrived in Cambodia that I met Meli, the man who would change it all. My housemate was a youth pastor at ICA church in Phnom Penh, so I went with her one Sunday as I was looking for a church to join. Immediately as I walked into church my eye was drawn to the worship team on stage and particularly to an enthusiastic Fijian who was running and jumping around as he sang. My housemate pointed him out to me as her friend Meli, who helped out with the youth work. I couldn’t help watching him throughout the worship, particularly when he sang a solo part which sent shivers down my spine. I can remember thinking that it would be fun to get to know him more. We met officially at my house when he and his friend, another youth pastor, were doing worship practice with my housemate. I could hear the music and laughter coming from downstairs and decided to go down and see what was going on. He introduced himself when I came down the stairs and I hung around watching and listening. I remember him at one stage rolling on the floor with laughter and I thought to myself, ‘I have never met anyone like this before!’ Meli: It was towards the end of 2016 when I met the love of my life. Our church youth pastor from Finland had invited me and my mission partner to practise some worship songs with the youth in ICA church Cambodia. And while we were singing and giggling there came walking down the stairs a glowing, beautiful young lady. I looked up saw her and in my head I was like “oooommmmgggg, God you created a fine woman”. She walked down, got some water then sat on the sofa and watched us for a while. I was blushing and slowly I walked to her, introduced myself and shook her hand. Soon after we became friends although it was a bit complicated as I had feelings for her but was a bit confused and going through some problems. Until one morning I decided to go over to her house and tell her how I felt towards her.

3. What was your first impression of each other? Jennifer: It was a bit of an up and down friendship at times though, so even though I liked him and was attracted to him, I wasn’t quite sure about him so I did my best to keep him in the friend-zone. He did eventually confess his feelings for me but as he was still a bit all over the place with the way he acted towards me, I told him it was best we just stayed friends as I didn’t think
anything else was a good idea. He wasn’t too happy about that. But then after a couple weeks of giving me the silent treatment or writing long messages he settled down a bit and I realised that I did really like him and it might be worth giving him a chance. Meli: She said that she liked me but was not ready for it because I was too much hassle and she didn’t think it was a good idea. I was like in my head ‘oh wow hahaha really!’ I walked out angry and shattered. After a few days I evaluated myself and said to myself, “you know what I am going to stop trying to impress her and just be myself”. Fortunately, a few weeks down the line we started to hang out again. So in December 2016, I asked her out once more and this time she said yes. We then dated for 10 months and in that 10 months I learnt a lot from this woman. To backtrack a little bit, before I came to meet her I had written down a few things in my journal about the woman I wanted to marry. That she would be God centred. She had to be kind, smart, beautiful, and humble. And in that ten months I spent with Jenny, I found a wise and wonderful woman. A woman of principles and integrity; full of love; humble and caring; and I saw the woman I wanted to marry.

4. What’s your favourite memory about each other? Meli: When I had the opportunity to go the UK and visit her family. I was so excited to go to England as it had always been a dream of mine. Although, jumping in the sea in England for me was a bad idea. But it’s hard to choose one memory; I grasp every moment with her. I guess when you stay with someone who is soft spoken and lovable you become addicted to them and can’t stand not seeing them. So I would say that every moment I spend with Jenna is my favourite, even when we are not in the best of moods I still love it.
Jennifer: One of my favourite memories with Meli, or at least one I enjoy teasing him about, is when he asked my dad for permission to date me. I
had never seen him so nervous and it was so funny. I think he must have peed his pants. Fortunately, for him my dad helped him out a bit and happily gave his blessing. I love his heart and his kindness and the way he took care of everyone and most of all his desire to serve God. Even when we
had disagreements we could always come together again and discuss the problems and grow to understand each other better each time. After even two
or three months, I knew he was the one I wanted to marry. I just had to wait for him to get around to asking. Which he did eventually and without hesitation I said “OK!” I have never once regretted that decision.

5. What is your favourite way of spending time? Meli: Jenna is quite a health conscious person. She is very careful with what she eats because she has some allergies. So we both like going to the gym and do workouts. Jennifer: I love just hanging out with Meli, it doesn’t really matter what we’re doing. I love when we get the chance to go on holiday or go for walks in nature or to the beach or to the gym. We both like practising our boxing and fighting skills at the gym so that’s always a fun activity after work.

6. Describe the wedding? Jennifer: It was quite hard to organise (the wedding) at first as we both live in Cambodia and had to organise it in Fiji from a distance, with Meli’s youth pastor helping us. Eventually I found an Airbnb place by the beach called Heavens of Vuda and they helped with all the organisation of the set up for the ceremony and reception. I had designed a dress almost a year before the wedding as I knew I wanted the masi material but in a more modern kind of style. So Pasto, our youth pastor helped us find a tailor in Nadi who was able to make a beautiful dress with the masi he had and the one his mother gave to me. In the end it was kind of a mix of all of our ideas and the finished product was amazing. I was really
happy with it and the tailor, Talei Takayawa, did an amazing job with it in a very short amount of time. Meli: We didn’t even have a first dance because the band was rocking it and everyone was just having that dance vibe, especially my wife.

7. Which part of it was special to you? Meli: I think the ceremony was quite special for me. It was cute, fun and emotional, especially looking
back at where I started and where I am now, I could only praise God for it. Jennifer: The day itself was really fun, in some ways it’s still a bit of a blur to me but I remember laughing a lot and having a great time with all the friends and family who came. I had my beautiful bridesmaids who have been
close friends of mine for many years and it was fantastic being with them, as well as with the others who had traveled far and wide to come. I  remember giggling a lot with Meli during the ceremony although I can’t really remember why. I do know that Pastor Romulo, who married us, did
a really great job though. The photographers, Inoke Drauna and Jone Tukana, took gorgeous photos, and the band — The Streets — were awesome. So all in all a really wonderful day! There were many special parts, I especially liked the speeches, particularly from my dad as well as the best man and maid of honour, they were really touching and special. I also loved the dancing!

8. Would you guys like to add anything else? Meli: I strongly believe that women have the potential and so much power to change a man to be better or worse. Because of all this time I have spent with this woman, the greatest thing I love about her is that she counsels me with all this wisdom and rebukes me if I need it. She believes in me and stands beside me even if I don’t believe in myself. Most of all she has taught me to have an open mind to things I would have been negative about and see the opportunity.