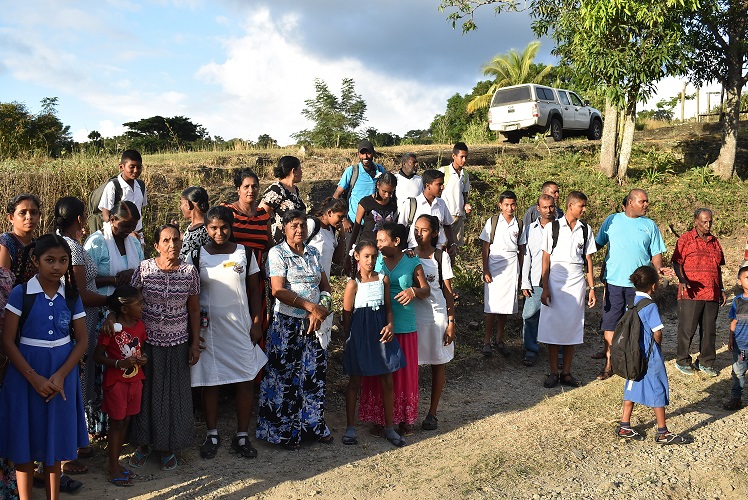 Residents and students of Vaivai Bandrama wait for the bus. Picture: BALJEET SINGH

RESIDENTS in a rural Lautoka community claim schoolchildren and the elderly have to walk up to 3km to and from their homes because of poor bus services in the area.

He also claimed he had written to the Fiji Roads Authority and Land Transport Authority and visited Classic Buses Ltd early last month about the issue.

“We have been facing this since April,” he said.

“About 80 per cent of the people who live in our area rely on the bus service. We have two routes, Vaivai and Vaivai Bandrama. Vaivai receives full service, but in Vaivai Bandrama the bus only goes a quarter of the way up the road.

“We also have an issue with school buses, the Vaivai Bandrama Rd bus was supposed to depart at 3.40pm and pick up students along the way and the Vaivai Rd bus at 4pm, but now there is only one bus at 5.30pm and because of this by the time our children arrive home it is about 6pm.

“We are worried about the safety of our kids because they are walking in the dark for up to 3km.”

Classic Buses director operations Adnan Mohammed said the concerns raised by the residents were not true.

“We have only stopped the morning 5.30am trip from Vaivai because there are only five to eight passengers. This was also checked by the LTA, all other trips are normal.”

“They hassle our conductors and threaten and abuse them with vulgar language.

“All our buses go according to their specified routes, it is only when the roads are not good that they do not go right to the end.”

Questions sent to FRA and LTA on Friday May 31 and again yesterday on the issue remain unanswered when this edition went to press.