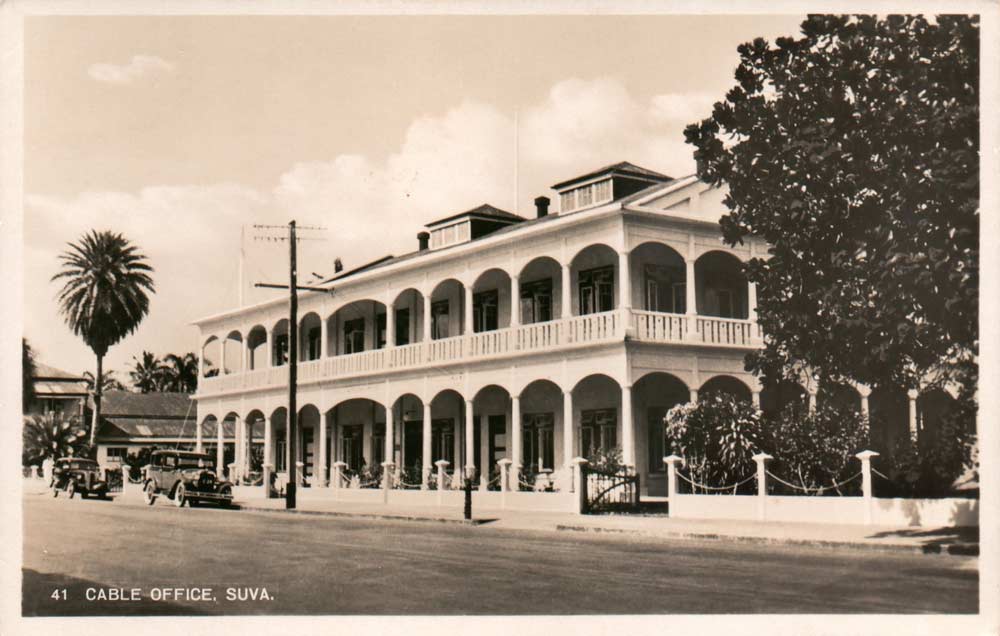 The Cable and Wireless Building as it stands today on Victoria Parade, Suva. Picture: 1902PacificGB

Long before the internet became a thing, people communicated via the landline telephone. Unlike today’s wireless, digital and satellite technology, communication back in the day was made possible via cables laid on the seafloor which traversed thousands of kilometres from one country to another.

Fiji, like other countries in the Pacific, was lucky in that it was a British Colony. And like all members of the crown’s vast empire, Fiji became connected to the rest of the world via communications infrastructure established by the British in the late 19th century.

Fijians in the 21st century would have no clue as to the challenges cable layers faced as they braved the elements and unruly seas in the battle to get the Pacific connected to the world.

The device you hold in your hand, sitting on your lap or on your work desk and all the things you can do with it because it’s connected to the internet – it was all made possible by the laying of submarine fibre optic cables that span the globe, running through the abyss, carrying information from one corner of the globe as pulses of light in a glass tube, connecting our land masses and all of us on them.

The story of telecommunications in the Pacific began late in the 19th century and the very early 20th century and Fiji, as a British colony and later an independent country, has always played a pivotal role in it.

They say the sun never set on the British Empire and between 1860 and 1900, telegraphic cables were laid to build a network to connect all parts of the empire. Heavily involved in this was Sir John Pender and his Eastern and Associated Telegraph Company, later known as Cable and Wireless.

The All Red Line, a cable named for going through countries coloured red on the map for being colonies, left Britain running West across the Atlantic to Canada and Bermuda, South to Barbados, Ascension Island and St Helena, and East to Cape Town in South Africa, over land to Durban, then across the Indian Ocean to Mauritius and the Cocos Islands where branches broke off to India and Perth, Western Australia and across to Queensland.

Born in Scotland in 1827 and apprenticed as a surveyor at the age of 14, he emigrated to Canada where he and some friends formed the Royal Canadian Institute.

He worked prominently on the railways of Canada, surveying routes and later engineering. Mr Glover said in 1862 Sir Sandford lobbied the Canadian Government about a trans-Canada railroad and was appointed chief engineer for the Canadian Pacific Railway (CPR) project in 1871.

Sir Sandford became privy to the fact that a cable was going to run alongside his planned railroad and further lobbied the British Government to help with the CPR and to lay the Pacific cable, but London said if the colonies wanted a cable they’d have to pay for it themselves.

Sir Sandford believed it of imperial importance that the British possessions of the Pacific be connected by submarine cable.

So after a few failed attempts to get the project up, and more lobbying by Sir Sandford, a committee was set up to look into all aspects of such a scheme.

A report by Admiral Sir Arthur Mostyn Field singled out Fanning Island, in modern day Kiribati, as a suitable place for a cable station and so it was decided that that the Pacific Cable would link Australia, New Zealand and Canada via Norfolk Island, Fiji, and Fanning Island –- taking the All Red Line around the world.

In July 1900 the Pacific Cable Scheme, which would lay down the terms and conditions of the operation of the Pacific Cable, was set up with its board consisting of eight members, three from the UK, two each from Australia and Canada and one from New Zealand, who would in turn select a chairman.

The British Government raised £2 million to cover the cost of construction and was only liable for 28 per cent of the loan in the event of failure, the rest being split between Canada and Australia (28 per cent) and New Zealand (16 per cent), with profits and losses to be shared the same way.

Tenders were called, and the contract was awarded to Telcon on December 31 that year. Captain S A Garnham, third officer on the Cable Ship Britannia 2 at the time, logged the voyage beginning in London in March 1901, anchoring in Sydney Harbour on May 7 for coal and arriving at Brisbane to begin laying the cable.

A cable house was built and they started sounding towards Norfolk Island, making land fall on June 12 and sounded various bays to find the best place for a cable landing.

Material for a cable house was unloaded to be built by the islanders. They left Norfolk on June 21 towards New Zealand, anchoring in the Bay of Islands on the 29th and then sounding in various bays to find a good spot for the landing, then returned to Norfolk Island to lay the link to Fiji.

Captain Garnham’s log described the seabed between Norfolk Island and Fiji as very uneven, which delayed the operation as they had to turn back and find a better bed for the cable. Material for a cable house was landed and on August 3, they left for Fanning Island.

The deepest depths of the expedition were found between Suva and Fanning Island, reaching as much as 3410 fathoms, about 6.2 kilometres deep.

They arrived on August 23 and left for Vancouver. In 1926, the Pacific Cable Board decided to duplicate the cable Fiji between Vancouver, the busiest section of the cable. Being a loaded cable, the new one would allow for a transmission rate of 1000 letters per minute against 200 on the old cable.

Peak periods for traffic occurred at opposite times of the day. Peak traffic going from England to Australia would be sent over the new cable, with the reverse traffic, which was considerably lighter, being sent over the original cable and vice versa.

As time moved on, more cables were laid and eventually the Governments of Canada, Australia, New Zealand and Fiji took over the Cable & Wireless assets and set up state owned Commissions to operate the various cables.

The Pacific Cable was withdrawn from service following the laying of the Commonwealth Pacific Cable in 1963, still a telegraphic cable but capable of so much more.

Cable and Wireless left Fiji in March 2012 with the sale of its 49 per cent stake in Fiji International Telecoms Ltd to Amalgamated Telecoms Holdings Ltd for$US10.6 million ($F24m).

While the original cable house is now gone, the FINTEL building on Victoria Pde in Suva still stands as one of those examples of colonial architecture with more purpose than most appreciate.

The next time you walk past the FINETL building, or if you see a cable ship in the harbour, take a minute to appreciate that because of these developments in technology over time, you are able to send that email, watch that video, access social media and talk face to face with your loved ones on the other side of the world.