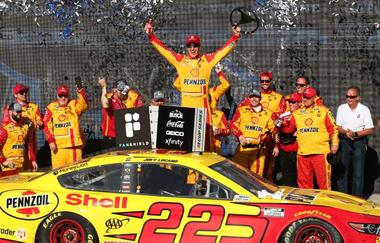 Like so many in the world right now, NASCAR champion Joey Logano is spending his downtime figuring out ways to make a positive difference in his community.

While home waiting out the COVID-19 pandemic, Logano has kept busy playing with his 2-year-old son Hudson and spending time with his expectant wife Brittany. A two-time race winner in the season’s first four NASCAR Cup Series races on track, he also participated in the inaugural eNASCAR iRacing Pro Invitational virtual race two weeks ago.

All the while, Logano said he has been trying to figure out what he could do to help — to provide a positive impact during a time of uncertainty, fear and need. A big-picture kind of boost.

So on Tuesday afternoon, Logano, 29, took his quest to help to a new level, announcing that the Joey Logano Foundation has partnered with Elevation Outreach to establish a $1 Million COVID-19 Response and Recovery Fund.

The partnership will contribute money toward educational equity and access, medical supplies, food distribution and financial shortages throughout the greater Charlotte area and communities across the United States.

The racer known for his big smile and positive personality will be providing plenty for people across the country.

“I’ve been blessed to have the ability to help others with our platform and for the past few weeks, the Joey Logano Foundation has been able to help in multiple ways on a local level, however, Brittany and I knew we could do more and felt a huge calling to give on a larger capacity at a statewide and national level,” Logano said.

The latest effort was a natural progression of thought. Since the sport’s on-track activity ceased three weeks ago, Logano immediately tried to reach out and help — from offering free meals from Bobbee O’s Barbeque to school children in the Charlotte area to posting homemade videos about proper handwashing technique featuring his young son, to providing black-and-white photos of his No. 22 Team Penske Ford to be copied for kids to color and decorate.

And on a lighter note, Logano retweeted a tongue-in-cheek reminder about social distancing in which Charlotte Motor Speedway took video of a cardboard standup of the driver in an empty race track grandstand.

“I’ve been trying to do whatever I can to help our sport in any possible way, to stay connected whether on social media or doing interviews,” Logano said, “and trying to make a charitable impact where we can. Honestly, I’m just as busy as I was, I’ve just really shifted my focus.

“I don’t know how to sit still. That’s the thing. I just find the next thing I need to work on to stay busy and still make an impact whether it’s for our sport or our community. Or just being a dad is keeping me plenty busy.

“I have not slowed down a bit, I can honestly say.”

And that’s saying a lot for someone who has already won half of the season’s races, owns the 2018 NASCAR Cup Series championship, the 2015 Daytona 500 trophy and has hoisted at least one trophy in each of the past nine seasons.

His outreach also includes a high-profile partnership with Feeding America through the Wheels Up organization.

The idea is to donate at least 10 million meals, and Logano joins an A-list of supporters from Seattle Seahawks quarterback Russell Wilson and his wife Ciara to Tampa Bay Buccaneers quarterback Tom Brady. Even Alex Rodriguez and Jennifer Lopez have donated money and raised the profile for the effort.