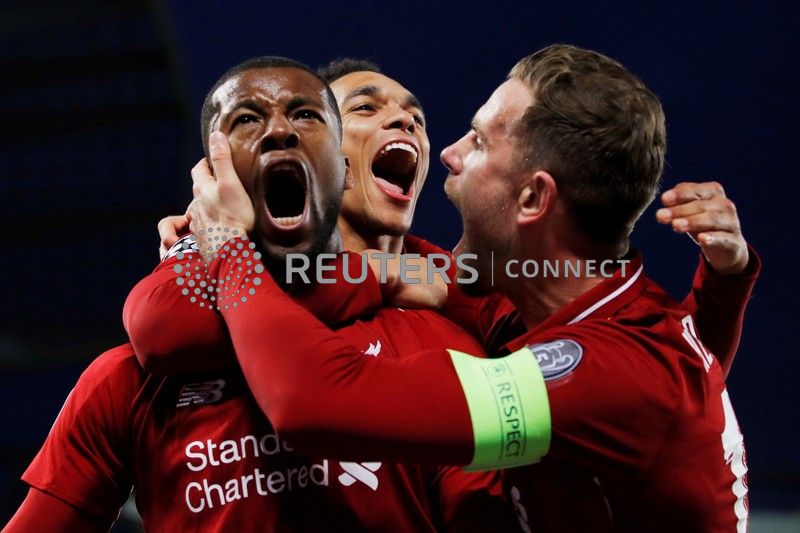 LIVERPOOL, England (Reuters) – Liverpool produced one of the greatest comebacks in Champions League history to beat Barcelona 4-0 on Tuesday, overturning a three-goal first-leg deficit and advancing to their second successive final with a 4-3 aggregate victory.

Juergen Klopp’s side will play the winner of Wednesday’s other semi-final between Ajax Amsterdam and Tottenham Hotspur, with the Dutch side leading 1-0 from the first leg in London.

“It was overwhelming. I would say it’s impossible,” said Klopp, amid wild celebrations at the final whistle when his team stood in front of their famous Kop stand to sing ‘You’ll Never Walk Alone’ with fans.

“Playing against the best team in the world. Winning with a clean sheet, I don’t know how the boys did it. It’s unbelievable,” added the German.

“I saw James Milner crying after the game on the pitch. It means so much to all of us. There are more important things in the world but creating this emotional atmosphere together is so special.”

Liverpool became only the third team in the history of the European Cup or Champions League to come from three goals down after the first leg of a semi-final and progress after Panathinaikos in 1970-71 and Barcelona themselves in 1985-86.

It was a night that will be remembered by Liverpool fans alongside their fifth European Cup win in Istanbul in 2005, when they came back from 3-0 down at halftime to win on penalties.

For Barca, who went out on away goals to AS Roma in the quarter-finals last year, after winning the first-leg 4-1, it was a bitter occasion that will raise many questions for coach Ernesto Valverde.

Messi, whose two goals in the first leg had given his team a seemingly comfortable advantage, was unable to influence the game with an away goal that would have been decisive.

The scoreline was remarkable enough in itself, but the fact that Liverpool overcame five-times European champions Barcelona without two thirds of their usual strike force made it extraordinary.

Yet the Anfield crowd wanted glory — they roared their team on to the field and greeted Barcelona, especially their former Liverpool players Luis Suarez and Philippe Coutinho, with boos.

The Liverpool players responded, taking the game to Barca and then grabbing a seventh-minute lead when a poor headed clearance from Jordi Alba fell at the feet of Jordan Henderson, who burst goalwards.

His low shot was parried out by Barca keeper Marc-Andre ter Stegen but straight to Origi who slotted home.

Barca had openings in the first half but when Messi twice got space around the box he fired wide of the target and when Jordi Alba burst through just before halftime, Liverpool keeper Alisson Becker was out quickly to nullify the danger.

Yet the game took a remarkable turn following the introduction at the break of Liverpool midfielder Georginio Wijnaldum for injured left back Andy Robertson.

The Dutchman drove home a low cross from Trent Alexander-Arnold, which Barca keeper Ter Stegen should have saved, to make it 2-0 in the 54th minute.

Two minutes later Wijnaldum rose to meet a Shaqiri cross with a powerful header to make it 3-3 on aggregate.

Liverpool then grabbed an extraordinary fourth goal with a quickly-taken corner from Alexander-Arnold, catching the Barca defence asleep with a low ball that was turned in at the near post by Origi.

That sent Anfield wild and meant Klopp’s side suddenly needed to switch mindset and defend a lead as Barca slipped, belatedly, into their trademark possession game.

Yet with Virgil van Dijk and Joel Matip outstanding in the centre of defence and Brazilian Fabinho making some crucial interventions in midfield, Liverpool held on for one of their most famous wins.

Klopp’s side, who lost to Real Madrid in last year’s final in Kiev, remain in with a chance of a double triumph as they head into Sunday’s final round of Premier League games trailing leaders Manchester City by just a point.

After their defeat in Barcelona, Sunday was expected to be the conclusion of a Liverpool season that promised so much but would ultimately conclude with Klopp’s side finishing empty-handed.

Now their campaign has been extended until the June 1 final in Madrid where they will have a chance of a sixth European Cup — which would move them above Barca on the all-time winners list.