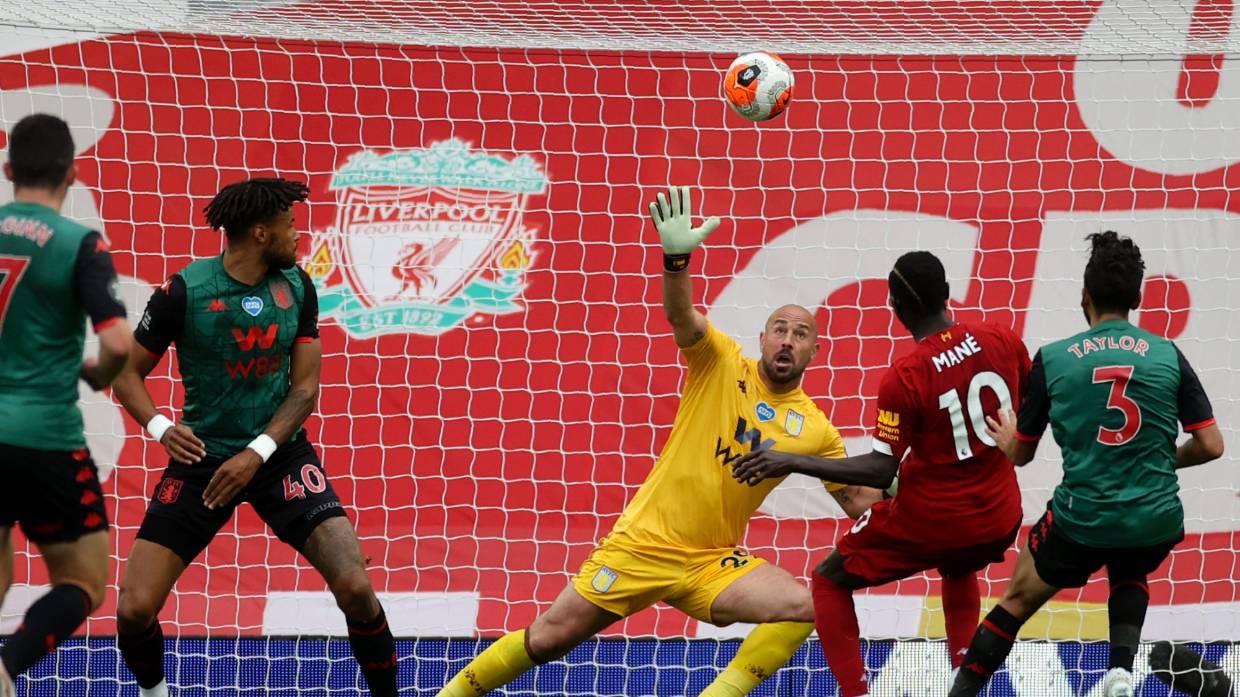 Liverpool kept alive their bid to finish the Premier League season with a perfect home record after labouring to a 2-0 win against relegation-threatened Aston Villa on Sunday (Monday NZ time) in their first match at Anfield since winning the title.

A 17th straight home victory this season _ and surely the most underwhelming _ was secured by goals from Sadio Mane in the 71st minute and substitute Curtis Jones in the 89th.

Three days after Liverpool lost 4-0 at Manchester City in its first match as champion, Jurgen Klopp’s team again lacked the intensity, snap and precision that brought them the title in such devastating fashion this season.

Indeed, Liverpool had managed just two shots on target against Villa before Mane met a low cross into the area from midfielder Naby Keita with a first-time shot that struck the underside of the crossbar and bounced down over the line.

Jones tucked away a shot after a nod-down at the far post by Mohamed Salah to double the lead with the last chance of a dull game.

It was enough to earn the Reds one of the five wins they need to beat the record season points total in the Premier League of 100, set by Manchester City in 2017-18.

Wins over Burnley and Chelsea at Anfield over the next two weeks will see Liverpool complete the season with 19 victories out of 19, for a 100 per cent home record that has never been achieved in the Premier League.

The match was more important for Villa, given their perilous position in the relegation zone. The visitors gave Liverpool a guard of honour before the match _ like Manchester City did on Thursday _ but didn’t pay the champions much respect on the field at an empty Anfield that was bedecked in club banners.

Indeed, with Liverpool often looking lethargic, Villa carried a threat on the counterattack, although Dean Smith’s team wasn’t helped by a foot injury that seemed to hamper captain and playmaker Jack Grealish most of the game.

Che Adams scored from a spectacular long-range lob for his first goal for Southampton to earn a surprising 1-0 win over Manchester City.

Making his 30th appearance of a frustrating first season at the club, Adams pounced on a loose ball after City defender Oleksandr Zinchenko was dispossessed. Adams struck a curling first-time effort from around 40m that sailed over stranded goalkeeper Ederson Moraes and into an unguarded net in the 16th minute.

Southampton then relied on a series of wonderful saves by goalkeeper Alex McCarthy to consign City to a third straight away defeat in the league – the first time that has happened to a team managed by Pep Guardiola in his distinguished coaching career.

City’s players had 26 shots on goal in a one-sided game at an empty St. Mary’s Stadium, but lacked the cutting edge they had in their 4-0 win over Liverpool on Thursday and which might have been provided by top scorer Sergio Aguero had he not been injured.

Kevin De Bruyne and rising star Phil Foden started on the bench and couldn’t inspire an equaliser after coming on as 59th-minute substitutes.

The result left second-place City 23 points behind already-crowned champion Liverpool with five games remaining. Southampton climbed to 13th place and is assured of another season in the Premier League.

New Zealand All Whites striker Chris Wood made a return for Burnley off the substitutes bench in the 69th minute in his first game since the EPL shutdown due to an Achilles tendon injury.

John Egan earned United a point with a 80th-minute equaliser at a virtually empty Turf Moor that left Chris Wilder’s side seven points behind Manchester United in fifth place, which could be enough to get into next season’s Champions League.

More realistic for Sheffield United is a place in the Europa League and the team is only a point adrift of seventh-place Arsenal with five games remaining.

James Tarkowski – captaining Burnley in the absence of injured captain Ben Mee – gave the Clarets the lead in the 43rd minute, sidefooting home from close range.

Burnley are two points behind Sheffield United in ninth.

Sheffield United have only won one of their four games since the restart of the league.

West Ham United snapped a run of seven consecutive defeats with a 2-2 draw at Newcastle United.

Michail Antonio fired the Hammers ahead in the fourth minute, but Miguel Almiron equalised for Newcastle in the 17th.

West Ham regained the lead when Tomas Soucek slammed home a rebound after a Declan Rice header struck the crossbar in the 66th minute.

But Newcastle’s former England midfielder Jonjo Shelvey secured a point for the home side with a well-struck left-footed shot.

Newcastle are in 12th place, with West Ham 16th.