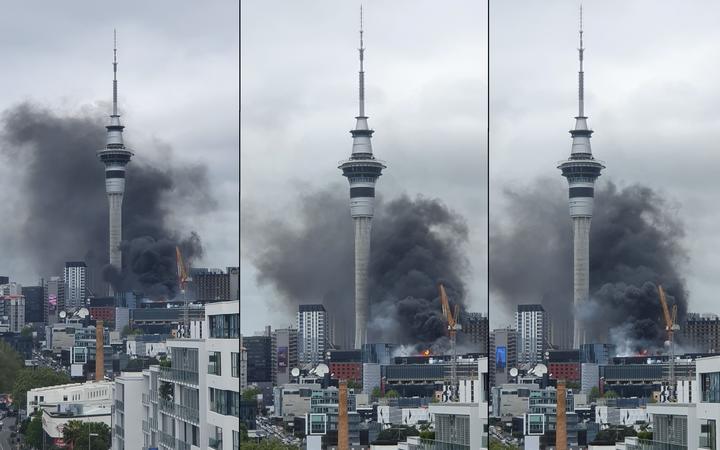 A major fire has broken out at the SkyCity convention centre in Auckland.

Flames can be seen in the vicinity of the under-construction SkyCity convention centre.

Police and ambulance staff are on the scene to assist fire crews and hundreds of people, including construction workers, have been evacuated.

One man said he was on his lunch break when he thought he heard a fire drill sound out.

“Im just eating my lunch…you hear that fire alarm, often before the alarm gets triggered you hear about it before hand and we just left and come here. I just want to finish my lunch.”

In a statement, SkyCity said everyone has been evacuated from the convention centre site and there have been no reported injuries.

It is working closely with Fletcher’s and Fire and Emergency to gather as much information as possible but it doesn’t know the source of the fire at this stage and it’s assessing the situation and the damage.

It’s advising people to expect delays and diversions for bus services using any of these routes.

Police are assisting with cordons and evacuations of workers in the immediate area. They are urging motorists to avoid the Auckland CBD area and asking members of the public to stay away from the cordons.

Fire and emergency say 23 appliances from across greater Auckland are responding, including one helicopter from Hamilton.

They are also advising people to stay out of the CBD area.

Fire and emergency spokesperson Jessica Chaplin said they received multiple calls about flames at the site just after 1pm.

She said fire trucks are still on their way from all over Auckland.

A witness says the flames appear to be spreading.

People have taken to social media to report on the fire.

SkyCity’s $700 million International Convention Centre and hotel project which has been plagued by problems, including cost over-runs and construction delays.

The complex is being built by Fletcher Construction and SkyCity.

The casino operator has been hoping the convention centre and hotel complex would be completed by the end of next year in time for the America’s Cup in 2021.

The project is set to cost several hundred million more than budget and is running two years late.

It was originally budgeted to cost between $400 million and $500 million, but is now expected to cost more than $800m.

Earlier this year, the company pushed the completion date out to the second half of 2020 – a delay of six months, forcing a review of bookings.

The complex is being built by Fletcher Construction and SkyCity has already triggered penalty clauses in its contract which require Fletchers to pay damages.

It was expected the convention centre would be ready well in time for 2021, when Auckland hosts APEC and the America’s Cup.