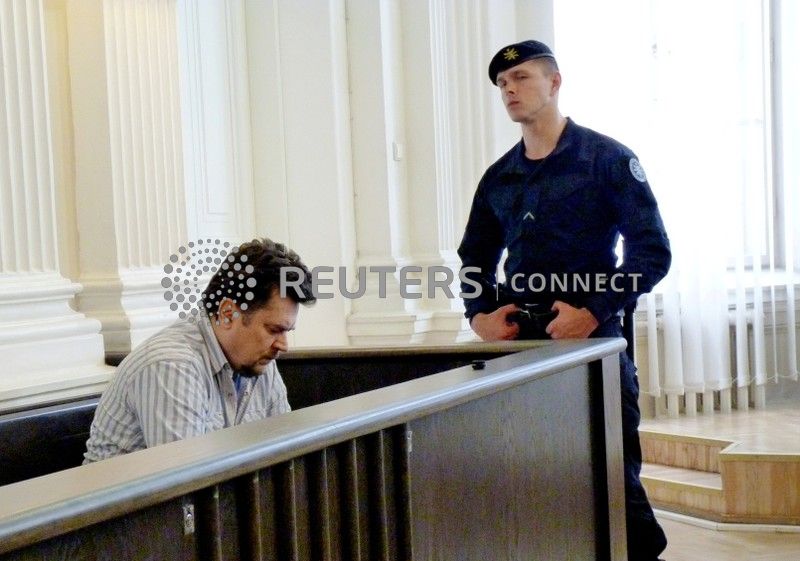 FILE PHOTO - Evaldas Rimasauskas (L) is seated ahead of a verdict announcement in his extradition case at a court in Vilnius, Lithuania on July 17, 2017. REUTERS/Andrius Sytas/File Photo

NEW YORK (Reuters) – A Lithuanian man on Wednesday pleaded guilty to U.S. charges that he helped orchestrate a scheme to defraud Facebook Inc and Alphabet Inc’s Google out of more than $100 million, federal prosecutors announced.

Evaldas Rimasauskas, 50, entered his plea to one count of wire fraud before U.S. District Judge George Daniels in Manhattan. He faces a maximum sentence of 30 years in prison at his sentencing, currently scheduled for July 24.

Rimasauskas also agreed to forfeit about $49.7 million he personally obtained from the scheme, according to a court filing.

Paul Petrus, a lawyer for Rimasauskas, said the plea spoke for itself and declined to comment further.

Rimasauskas, originally from the Lithuanian capital of Vilnius, was extradited to the United States from Lithuania in August 2017.

U.S. prosecutors accused Rimasauskas and unnamed co-conspirators of bilking Google and Facebook out of more than $100 million by posing as an Asian hardware vendor and claiming that the companies owed the vendor money.

The prosecutors did not name the companies, but Taiwan-based Quanta Computer Inc confirmed after Rimasauskas’ arrest that it was the Asian vendor, and a Lithuanian court order in 2017 identified Google and Facebook as the victims.

The scheme defrauded Google out of $23 million and Facebook out of $99 million, according to that order. Prosecutors said Rimasauskas contributed to the scheme by setting up a fake company and a bank account in Latvia.

The scheme is an example of a growing type of fraud called “business email compromise,” in which fraudsters ask for money using emails targeted at companies that work with foreign suppliers or regularly make wire transfers.

The Federal Bureau of Investigation said in February 2017 that losses from such scams since the agency began tracking them in 2013 totalled more than $3 billion.