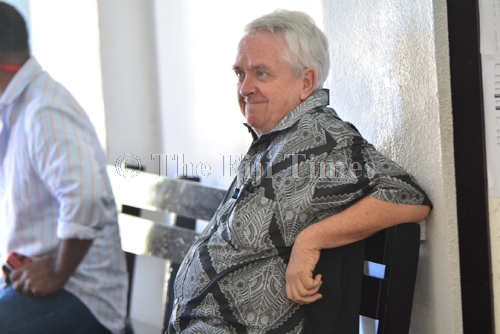 Dr Paul Geraghty says the cultural identity of native Fijians will be threatened by any loss of the country's biological diversity Picture: JOVESA NAISUA/FILE

THE content of an alleged seditious article that was published in the Nai Lalakai newspaper would not cause anyone to feel ill will or hostility towards Muslims, linguist Professor Paul Geraghty said. Prof Geraghty, a professor in linguistics at the University of the South Pacific, made the statement while giving evidence for The Fiji Times Ltd as the sedition trial against the company and four others continued before Justice Thushara Rajasinghe at the High Court in Suva yesterday.

The prosecution yesterday objected to Prof Geraghty testifying as a defence witness on the grounds that the defence was using him as an expert witness and it should have received advance warning.

However, dismissing the objection, Justice Rajasinghe said he could not find any provision in the Criminal Procedure Act requiring the defence to disclose its case or its defence in advance. In his evidence, Prof Geraghty said the content of the letter did not suggest that any actions be taken against anyone.

He said he had read the allegedly seditious letter about five to 10 times and it generally described Muslims in reference to an incident that took place historically in a faraway place.

He said that as a translator, one must understand the context of the words used in the subject discussed. He said most languages borrowed words from other languages. He said interpreting the iTaukei words to English words could be a challenge at times because of its limitations.

The court also heard from lawyer Richard Naidu, the second defence witness for the company. Mr Naidu, a partner in the law firm of Munro Leys, gave evidence that Fiji Times Ltd was a client of the firm.

He said three of the firm’s partners, including himself, Nick Barnes and Jon Apted provided legal advice and support to The Fiji Times editorial staff when required.

Mr Naidu said Munro Leys work included commercial, employment and contract work, but most of it was centred on pre-publication work.

He said anyone of the editorial staff, at whatever level, could contact the firm if they had any queries and that they would generally run content of the newspaper past the lawyers if they felt it was legally contentious.

Mr Naidu said for editorial work, there was pre-publication work and sometimes additional work arising from the consequences of publication such as dealing with legal complaints or court appearances.

Answering a question from Devanesh Sharma, the lawyer for Nai Lalakai editor Anare Ravula, Mr Naidu said that the firm was unaware of any complaint received through the Media Industry Development Authority (MIDA) about the allegedly seditious letter.

Answering questions from prosecutor Lee Burney, Mr Naidu said the concept of editorial independence kept the editorial side of the paper separate from the advertising side.

He said it was designed to ensure that the editorial content of the newspaper was not influenced by ownership interests or advertising interests. Questioned about Mr Arts’ role as general manager and publisher of The Fiji Times, Mr Naidu said the Media Industry Development Act required a person to hold the position of the publisher. He said the term was derived from the former Newspaper Registration Act.