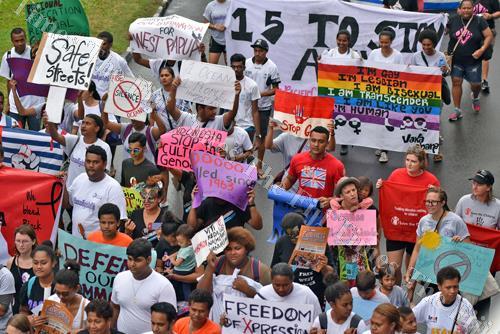 People from all walks of life with their banners and placards during the Human Rights march along the streets of Suva. Picture: FILE

OUR human rights in Chapter 2 of the 2013 Constitution includes, amongst others, the freedom of speech, assembly, association, religion, elections, and publications.

However, the people continue to be subjected to serious limitations of these freedoms that are not reasonable nor justifiable.

An independent assessment of the status of our freedom is a report by the “Freedom of the World 2017” that rated Fiji as “partly free” while all the other Pacific Island Countries were rated as “free”.

The report further stated that “the repressive climate that followed a 2006 coup has eased since democratic elections were held in 2014. However, the ruling party frequently interferes with opposition activities and military and police brutality is a significant problem.”

As the country moves closer to another general election, it is now even more urgent and important that we do not tolerate the abuse of these basic human rights that we had been subjected to in the past.

One of the founding pillars of Unity Fiji is to build a nation that is free and fair to all the people — a country that we will be proud to pass on to our children and grandchildren.

Unity Fiji firmly believes that a free and independent media plays a pivotal role in safeguarding our rights to a free and fair election especially in exposing flaws in the election processes and safeguarding freedom of expression.

The media also plays a constructive role in combating all forms of stereotypes and promoting unity while also celebrating our unique diversity.

We must ensure that the recent moves to regulate social media as an attempt to clamp down on “fake news and hate speech”, must not come at the expense of muzzling freedom of expression.

We also strongly believe that the penalties on individual journalists and media bodies under the Media Industry Development Act severely restricts any form of investigative journalism and coverage of issues deemed sensitive, especially to those in power.

This only fosters fear and discourages a wide range of independent views on critical national issues.

Our right of expression have been severely limited by laws that restrict criticism of Government and Parliament. These had led to three members of Parliament being suspended in the past three years.

Surely, democracy is anchored in the basic right of people to express their opinions of those that govern us.

Unity Fiji believes that penalties against perpetrators of sexual and domestic violence against women and children must be strengthened in the wake of growing incidences, a sad reflection of the moral decay that now exists in our communities.

We are of the view that while the struggle for civil and political rights continues to evolve, we must not allow our so-called social and economic rights to come at the expense of other basic freedoms.

The continuous incidents of beatings, torture and threats in recent times are also a reminder that even those tasked to serve and protect, must themselves be held to account.

The increasing penalties for those who attack police officers from five to 10 years under the recently passed Crimes Amendment Bill must also be weighed against the rights of ordinary citizens who also fall victim to police brutality.

They too must be treated the same way officers are treated and harsher penalties must also be enforced on those perpetrators.

The deafening silence of the majority over Government decisions that deny our basic rights and freedom should not be mistaken for acceptance.

In the immortal words of Nelson Mandela, “To deny people their human rights is to challenge their very humanity”.