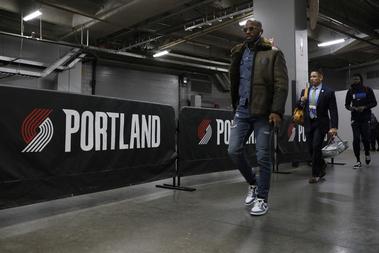 With a hot start and a strong third quarter fueled by their starting lineup, the Portland Trail Blazers picked up a blowout win over the visiting Oklahoma City Thunder 136-119 on Wednesday.

It was a balanced scoring effort for Portland in its return home from a 2-4 road trip, led by 27 points from Damian Lillard. CJ McCollum added 22 points, Hassan Whiteside 21 points and 16 rebounds, and Carmelo Anthony 19 points on 9-of-11 shooting.

Portland finished with a 54-38 rebounding edge, and it outshot the Thunder from the floor 52.1 percent to 44.3 percent.

The game reached a crescendo in the early fourth quarter as Anthony caught fire, drawing chants of “Melo!” from the Portland crowd as he left the game.

Anthony scored the bulk of his points on contested step-back jumpers, contact layups and even a powerful dunk on the baseline drive. He let out a roar to the crowd after ripping his hands off the rim on the dunk.

It didn’t take long for the Portland offense to take off. A blistering first quarter saw the Blazers start 10-for-10 from the field, thanks in large part to Whiteside’s play in the pick-and-roll. The floor seemed to open up for the Blazers with four shooters and Whiteside on the floor, and the team scored a season-high 42 in the first.

While the offense cooled in the second quarter, Portland still led 63-50 at the half — a season-high margin at the break for the Blazers.

Lillard and McCollum controlled the third quarter as Portland pulled away but scoring another 41 points. Anthony’s surge in the early fourth put the game well out of reach.