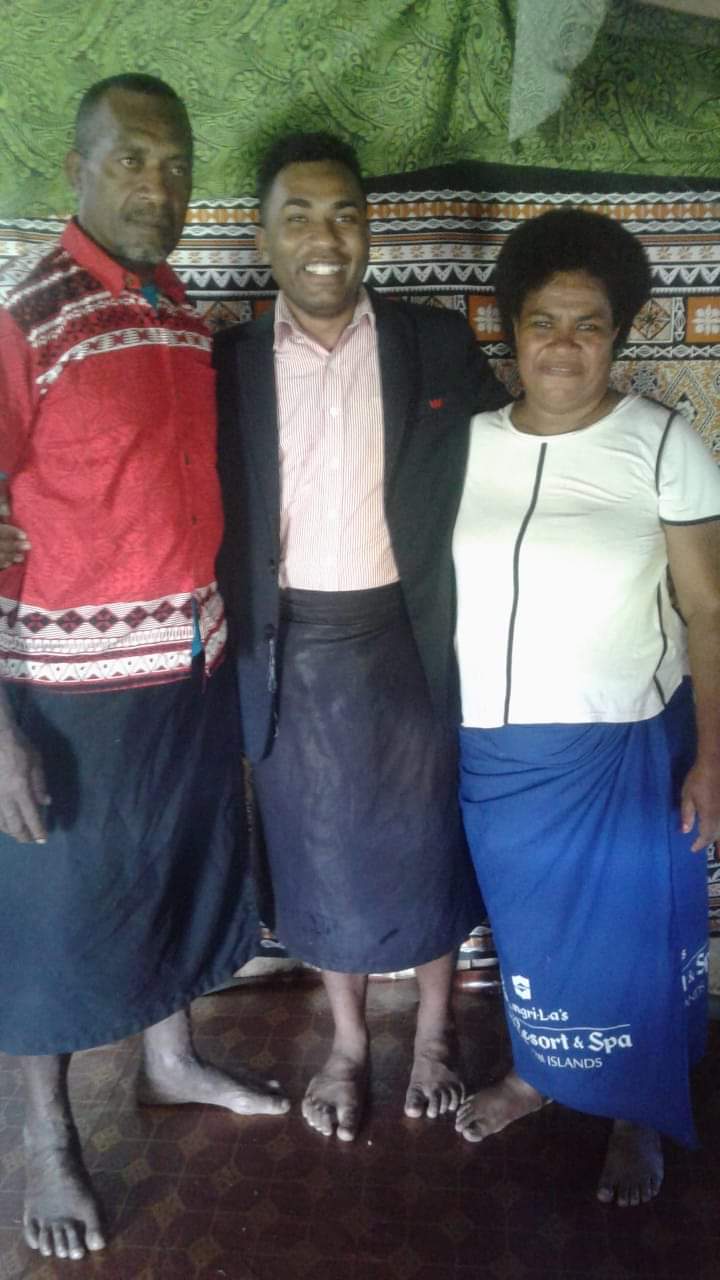 Viliame Vauvau is flanked by his parents at home in Tavua. Picture: SUPPLIED

THE constant struggle Viliame Vauvau went through in his life from a very young age persuaded him to work hard and make his parents proud.

The 21-year-old is originally from Nabuna, Tavua and grew up in a family that had hardworking parents who worked hard daily to put food on the table and send their five children to school.

His father is a farmer and a fisherman and his mother used to go out in the sea to catch crab and sell it to earn their living.

Every afternoon after school, while the other students have gone home, he joined his other siblings selling crabs or fish on the streets of Tavua.

Mr Vauvau who works as a teller at the Westpac Banking Corporation Tavua Branch is proud to share the account of his life as a testimony to many other Fijians who may have gone through the same ordeal – there is always light at the end of the tunnel.

“I was raised up in a very challenging family, both of my parents were unemployed and there were eight of us in my family,” Mr Vauvau said.

“We live in a small wooden house with no electricity or water .Every morning, we have to wake up to fetch for water from our neighbour for cooking and bathing. “I can clearly remember at the back of my mind how we use to stand on our toe high to watch movies from outside our neighbours’ house through their windows. It was all parts and parcel of our daily struggles.”

Moreover, Mr Vauvau shared life was really hard and it was always sad to see their parents struggling every day to feed them. But one thing was for sure that amid these struggles, the most important thing was to send their kids to school which was always the family’s first priority.

It was back in 2010, during the Tavua District School prize giving ceremony that Mr Vauvau started to make his parents proud by scooping the Dux award for his school.

“All other friends of mine went to other big school because their parents can afford to send them there but I had no choice but to go to our local school – Tavua District Secondary School.

“Even though I was in high school, it still it didn’t stop me from doing daily duties which is to go and do the selling after school and this continues until year 13.

“I will never forget the day we had cadet training in our school and we were to pay $40 each for our cadet uniform……..my parents did not have money so my sister and I went to sell fried fish with cassava for $2 per packet in town and this was how I was able to pay for my cadet uniform.”

After high school, the outspoken Tavua native was enrolled into the University of the South Pacific and spent three years on his degree before he graduated and was offered an employment at the Westpac Bank Tavua branch.

He wasn’t the only successful one in the family; two other siblings went on to become a teacher and the other a fisheries officer.

“For me success simply means doing something that will make your parents proud and happy and giving them the life that they want .

“My parents always motivated me to work hard, to never give up and to always strive for excellence no matter whatever mountain you have in front of you.”

“I would like to advice my fellow friends to always work hard, never say never , never give up,be proud of your upbringing , be grateful and most importantly love and respect your parents and do things that will make them be proud of you and try and give them the life that they want to have,” Mr Vauvau concluded.