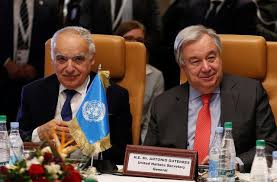 TUNIS (Reuters) – There are signs that Libya’s two rival leaders may for the first time solve a key dispute over control of the army, amid efforts to overcome the country’s eight-year-long conflict, U.N. Secretary General Antonio Guterres said on Saturday. The United Nations has been trying to broker a power sharing agreement between Khalifa […]