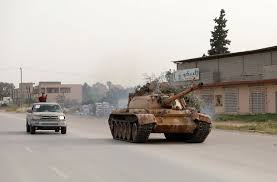 The town of Aziziya was fully under the control of the Tripoli forces, with shops reopening after days of fighting, a Reuters team at the scene said.

Haftar’s Libyan National Army (LNA), which is allied to a rival government in eastern Libya, mounted an offensive on Tripoli almost three weeks ago but despite heavy fighting last week it has failed to breach the city’s southern defenses.

In recent days, forces backing the Tripoli administration have pushed back the LNA in some areas.

But fighting still raged in some southern suburbs on Tuesday, with shelling heard throughout the day even in central Tripoli, residents said.

The Reuters team driving south of Aziziya through villages on the road to Hira saw several burnt-out cars belonging to Haftar’s forces and five dead fighters.

The Reuters reporters made it to about 25 km (16 miles) from Gharyan, the forward base for Haftar’s offensive to take Tripoli. The town could still be a challenge to recapture as it lies in the mountains starting after Hira.

One tired-looking LNA prisoner sat on the back of a pickup truck. The Tripoli forces had also seized two Soviet-made tanks from the arsenal of former ruler Muammar Gaddafi, one of them heavily damaged.

As the Reuters team was about to leave, rockets were fired nearby from LNA positions.

According to U.N. figures, 264 people, including 21 civilians, have been killed by the fighting since April 5, and 1,266 wounded, including 69 civilians. About 32,000 civilians have fled their homes for safer areas.

The latest military action is a setback to Haftar’s plans to install himself as ruler of the whole country and could ease a situation that has divided and confounded foreign governments with an interest in Libya.

The front remains fluid, however, and his fortunes could change again. Both sides have gained and lost territory within days or even hours.

If a ceasefire is called as demanded by the United Nations, the LNA would have still gained a considerable amount of territory.

The North African country has been in a state of chaos since Gaddafi was toppled in 2011 with Western intervention, and the latest flare-up threatens to disrupt oil flows and leave a power vacuum that Islamist militants could exploit.

Libya is also the main departure point for migrants from elsewhere in Africa trying to reach Europe across the Mediterranean, a big concern for European Union nations.

There have been reports that migrants in a detention facility in Qasr Ben Ghashir district, which has been fought over since the start of the offensive, have been seriously wounded in random shooting, the U.N. migration agency, IOM, said. It gave no more details.

Some 3,600 migrants remain trapped in detention centers near the frontline, the United Nations said in a statement.

“The situation in these detention centers is increasingly desperate, with reports of guards abandoning their posts and leaving people trapped inside,” the world body said. “In one facility – Gharyan – has reportedly been without drinking water for days.”

African leaders including President Abdel Fattah al-Sisi of Egypt, a backer of Haftar, called for “an immediate and unconditional ceasefire in Libya”.

Tripoli has rejected a ceasefire without an LNA withdrawal. The statement seemed to support LNA, saying the army needed to end the “chaos of militias”, a position the LNA often takes.