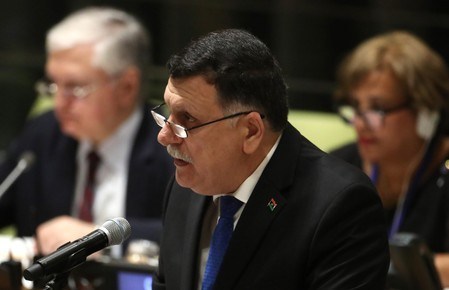 TRIPOLI (Reuters) – Libya’s internationally recognized Prime Minister Fayez al-Serraj said on Sunday he was not prepared to sit down with eastern commander Khalifa Haftar to negotiate an end to the two-month offensive against Tripoli.

His comments to Reuters suggest low prospects for a ceasefire soon in the battle for Libya’s coastal capital, where Serraj and his administration are based.

In the latest turmoil since the toppling of Muammar Gaddafi in 2011, Haftar’s Libyan National Army (LNA) force has been unable to take Tripoli despite fighting that has caused havoc in southern suburbs and displaced tens of thousands of people.

“I will not sit down again with this person because what he has done in past years shows he won’t be a partner in the political process,” the 59-year-old Serraj said in an interview at his wood-paneled office in central Tripoli.

The longest-serving in a succession of Tripoli-based prime ministers since 2011, Serraj has met Haftar, a 75-year-old former general in Gaddafi’s army, six times in the past few years.

The last meeting was in February in Abu Dhabi as foreign powers sought to broker a power-sharing deal between the rival eastern and western administrations.

“He was only trying to gain time,” Serraj said, pointing out that his rival had sent planes to bomb Tripoli.

Serraj struck a defiant tone, saying his troops, from armed groups in western cities, would continue to fend off Haftar, whom he views as a would-be dictator like Gaddafi.

“Our primary military goal is to defend Tripoli,” he said. “In the coming days there will be positive news … progress,” he said, without giving further details.

Calls from abroad for a ceasefire have fallen on deaf ears, particularly given diplomatic divisions over Libya.

Egypt and the United Arab Emirates back Haftar and have armed him since 2014 as a perceived bastion against Islamists, according to U.N reports. Haftar depicts himself as the man to reunite Libya and combat jihadists.

Most Western countries work with Serraj and Turkey recently sent him arms. France and other countries have proposed an unconditional ceasefire – without putting real pressure on Haftar – which would allow his troops to stay in western Libya.

But Serraj’s camp has rejected that. “You cannot ask the person defending himself to cease fire,” he said.

In Sunday’s interview, he backed a U.N. blueprint for a national conference to prepare for elections by year-end.

“Libyans should meet to overcome this (current) struggle for power,” Serraj said.

The prime minister said he was concerned the OPEC member’s oil facilities could become embroiled in the conflict.

“For us, it is very important that oil production continues,” he said. “But there are dangers coming from the other side which has turned ports into military positions.”

The LNA controls all major oilfields and most ports.

Serraj said his forces would avoid attacking any oil facilities even if the LNA was stationed there.

The war was hurting Libya’s development and basic services as funding had to be diverted to equip troops and treat the wounded, he said. “There could be a (national power) blackout anytime,” he said.

As well as threatening to disrupt oil supplies, there are fears the conflict will increase migration across the Mediterranean to Europe and encourage jihadists to exploit the chaos.