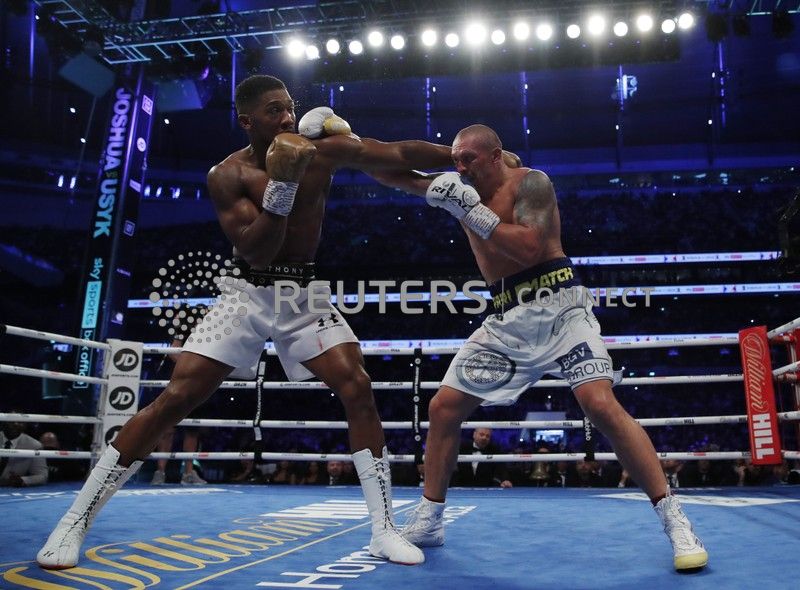 What a fight, as Oleksandr Usyk defeated Anthoby Joshua during their WBA, IBF and WBO heavyweight title fight at the Tottenham Hotspur Stadium. With the classic win, Usyk dethroned world heavyweight champion Anthony Joshua in his own backyard. The pride of Ukraine delivered a stunning display to earn a unanimous points decision in front of a sell-out crowd. Ironically, Usyk gave away height, weight and reach to AJ, who suffered a second career defeat and gave the crowd little to cheer. AJ also ran out of ideas against Usyk, who followed the path set by Evander Holyfield and David Haye. The much-awaited boxing belt was a timely lesson for AJ, but a beautiful and memorable win for Ukraine’s Oleksandr Usyk. Rajnesh Ishwar Lingam Nadawa, Nasinu

Lost control or in control

People’s Alliance Party leader Sitiveni Rabuka says that Prime Minister Voreqe Bainimarama has lost control of his own government (FT 27/09). There are two sides to everything with many reasons for the removal, termination, and resigning of senior civil servants. There is one obvious fact and that is many government departments are not performing to high quality and efficient standards and the responsibility and accountability rest with whoever is in charge. If one cannot manage his/her department as expected, one should be removed and replaced by someone who can do the job to the expected standards. I believe too many of our senior civil servants are content with mediocrity, confining themselves to the norm doing the same things as others before them were doing. We need leaders who will always try to do things better for the nation, and that quality is what is required and counts most of all. We Fijians need to experience and see constant high quality standards of service delivery, and that depends on the innovative qualities and experience of whoever is in charge. As it is, and has been so for decades, many departments haven’t changed with the times nor gotten any better, several have obviously made changes, but can do much better. All in all the majority of our government institutions and departments have lots of room to improve, and for that to happen we need personnel who can make it happen. Observe carefully the current service standards of government institutions and departments to understand what I’m saying, currently mediocre to say the least! I will not be surprised if more senior civil servants resign or get terminated. Our Prime Minister could well be very much in control in trying to make a real difference. Simon JC Hazelman Rava Estate, Savusavu

Savenaca Narube of the Unity Fiji party has claimed that the Government has lost touch with the people… oh really? Did you carry out a survey? If so, when, where, how and by who? This is far from the ground reality. I believe FijiFirst may not be a perfect government but it has done heaps of things for Fijians: scholarships, student loan scheme, food rations during pandemic, medical help, assisting the needy during disasters, border control, revamping agriculture, infrastructure improvement, daily dose of information on COVID-19 etc, etc…the list can go on! Therefore, I ask you to dig into your Christian soul and find out if you are speaking the truth. Dewan Chand Donu Place, Namadi Heights, Suva

COVID-19 has taught us a lot, if we can look at our situation like this. We have isolated, masked up, social distanced and a few more things. For me that’s how we should live life. Well, not with mask. But we must and repeat we need to be more mindful of how we conduct our everyday life. People now have small backyard gardens and it’s so good to see this. We wash our hands, are more aware about our situation and just being careful. We have learnt a lot… I have. Have you? Allen Lockington Kava Place, Lautoka

Just wondering if it would be a good idea for the Auditor-General to show the audit report first to the Cabinet? Sukha Singh Labasa

So that top wig from the government side is being critical of The Fiji Times’ reporting and news. How do they know this? Oh… that’s right, they read the newspaper! So why read or bother about it if they think it’s not reliable? We never heard of this newspaper mention negative things about the other newspaper so why is it vice versa? I believe usually statements that are not rosy to the listener’s ears are considered to be noisy.  KIRTI PATEL Lautoka

WHILE discussions are underway regarding the suburban bus shuttle station project, we should not forget that the existing bus station surfaces in Fiji need urgent attention. The rainy season is upon us and it would not be a surprise if the bumpy and hollow surfaces start to give birth to craters. MOHAMMED IMRAZ JANIF Natabua, Lautoka

PRIME Minister’s calling world leaders, embracing Fiji’s vision of better, greener and safer future for humanity is a wake-up call for all to join the world to implement this for safety of all human beings. Looking at the ever-worsening effects of climate change and unpredictable COVID, our future seems to be messy, complicated and full of twists and turns with pandemic life. Let’s take up the challenges to make the world safer, greener and a better place to live in a clean environment. Always be aware of what’s happening around the world, educating ourselves as it is easier to keep up than to catch up. “Live as if you have to die tomorrow. Learn as if you were to live forever.” – Mahatma Gandhi. TAHIR ALIHAMILTON New Zealand

I wish to respectfully (if strongly) disagree with Tarun Tikaram’s letter in yesterday’s The Fiji Times (“Civil servant’s role”). In his letter Mr Tikaram suggests that Government Statistician Kemueli Naiqama might have been properly sacked for “contravening” his employment contract. It’s important to respond to this, because Mr Tikaram’s letter reflects a mindset, encouraged by the current government, which seems to have wrongly taken hold both inside and outside the civil service. Public servants like Mr Naiqama do not hold office to cater to politicians’ whims. Public servants have a specific role in government, just as ministers do. Civil servants and ministers are both bound by the law. Politicians come and go (at least I wish they would); civil servants do not. Elected politicians can set policies which, within limits, civil servants are bound to follow. But civil servants have a duty to the law which is higher than their duty to politicians. Mr Tikaram suggests that by publishing survey data including ethnic breakdowns Mr Naiqama breached s.5 of the Statistics Act. That line, currently being pushed by the Economy Minister, is in my view nonsense. The relevant sections of the Statistics Act have not changed for 50 years. Section 4 tells us that it is the duty of the Government Statistician to collect and (among other things) publish statistical information about the people of Fiji. So he doesn’t need the minister to tell him to do that. Section 5 says “With the approval and on the direction of the minister, the Government Statistician shall collect in Fiji or any part thereof, statistics relating to any of the matters set out in Schedule 1”. Schedule 1 of the Act sets out 27 “prescribed matters”. These include things such as population, housing, income and earnings – even “sweepstakes and lotteries”. Nowhere does Schedule 1 say “You cannot collect ethnically broken down data”. It would be ridiculous if it was. Ethnic data is a respected and useful demographic resource. No decent statistician in or out of Fiji would say otherwise. The Household Income and Expenditure Survey (HIES) was published by the Bureau of Statistics in the same way many have been in the past. One politician ranting irrelevantly from time to time about ethnic data does not amount to “a direction” not to collect or publish it. As far as I know, the bureau has never been told “don’t collect ethnic data”. Many of us may remember the 2017 census. We may remember answering questions about our ethnic group. The same politician’s statement that Mr Naiqama “breached” section 5 is equally nonsense. Section 5 is about the data the Bureau of Statistics is allowed to collect (because people are also entitled to their privacy on some things). It is not Mr Naiqama’s employment contract. The words “with the approval and on the direction of the minister” mean only that the minister must approve any particular activity the bureau can perform, for example, in a financial year. After all, the bureau has a budget like every other government department. It cannot do everything. The words in section 5 also allows the minister to direct the bureau (for example): “Please go out and collect some specific tourism data for me, because I need it to help me make policy”. The words do not mean “I forbid you from doing your job properly and professionally by declining to collect important and relevant information”. There is a modern saying: “Stay in your lane”. It aptly describes how ministers and public servants should operate for the public good. Ministers are not gods and they do not run the government. They have a particular role to play in it. It is their job to understand that role and not to exceed it. In my opinion, Mr Naiqama stayed in his lane, and his minister did not. RICHARD NAIDU Suva (Mr Naidu is a Suva-based lawyer who does some work for The Fiji Times – Editor)

I believe we are witnessing history as for the first time we are having a public holiday on a Sunday. I have no words, absolutely nothing to say about this. It is how Fiji is at the moment. Raynav Chand Nakasi

“The home is the first and most effective place to learn the lessons of life: truth, honour, virtue, self-control, the value of education, honest work, and the purpose and privilege of life. Nothing can take the place of home in rearing and teaching children, and no other success can compensate for failure in the home.” – David O. McKay. Jadon E Masivesi Tadra- Votualevu, Nadi

Climate change threatens Pacific Islanders, and students of the Pacific Islanders’ university are taking their case on climate action by developed nations to the International Court of Justice. Wouldn’t it be a good idea if Pacific Islander nations totally ended any reliance on burning fossil fuels, diesel and petrol first, to have any semblance of integrity? Show us the way. Rod Matthews Melbourne, Victoria, Australia

There are many writers in this column who appear to be making love to this paper and to their grog, instead of their partners. I am not saying this, they have said so themselves on numerous occasions. Granted, things get boring after a while with one’s partners, but I feel sorry for both — the paper and the grog! Jan Nissar NSW, Australia

I believe the $360 allowance is not much for a family with children to survive, unless we supplement it with some other sources of food supply for our wellbeing. In this COVID uncertain viral atmosphere, we need to budget ourselves in accordance with our needs and wants. If someone gives you a lemon, make lemonade. Tahir Ali Hamilton New Zealand

Willard Miller’s letter (FT 25/9) on the “full name” of Mitt Romney, former Republican nominee for President, reminded me of the legendary Ba and Fiji soccer star the late Farouk Janeman, my senior at Natabua High School. I think outside of his family nobody in Fiji knew or bothered about his BC name. He used to get press headlines for his soccer skills as Janeman! Rajend Naidu Sydney, Australia e