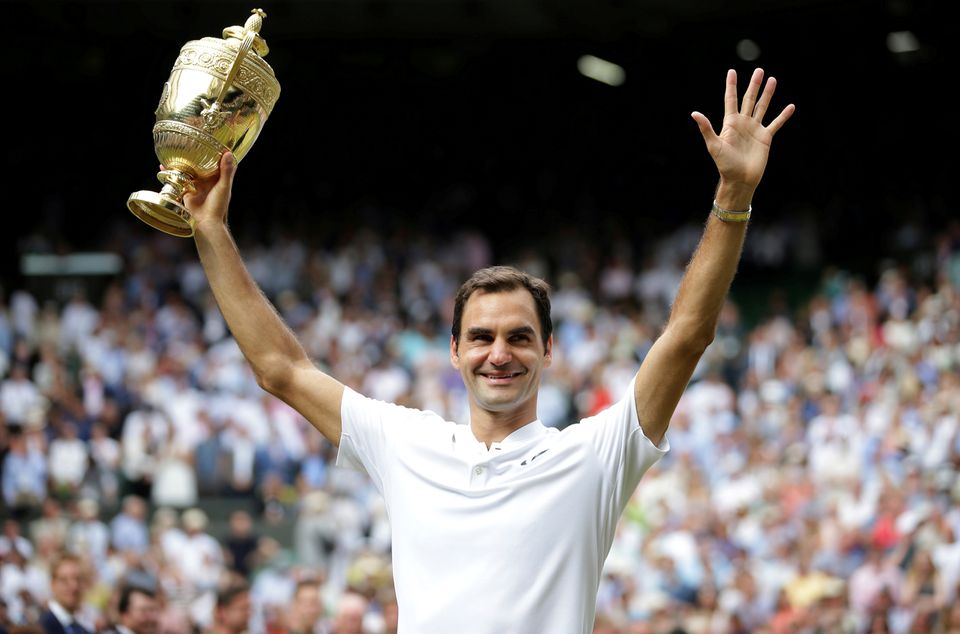 THESE lines by Rafael Nadal, “When Roger leaves the tour, an important part of my life is leaving too, because all the moments that he has been next to or in front of me are important moments of my life,” showed the human side of their rivalry. Out of all the unforgettable images from Roger Federer’s emotional sendoff at the Laver Cup, one resonated in the tennis world and beyond as Nadal — Federer’s greatest rival — was in tears throughout the retirement ceremony. With 42 Grand Slam singles titles between them (Federer 20 and Nadal 22) theirs was a rivalry that both defined a golden era of men’s tennis and took the game to new heights. It was always the mutual respect and camaraderie that shined the brightest, the same way it was always done since a teenage Nadal burst onto the ATP Tour scene in 2004, amidst the height of Federer’s dominant reign. The tennis world will miss their rivalry. RAJNESH ISHWAR LINGAM Nadawa, Nasinu

IN his letter to The Fiji Times, Tarun Tikaram claims the FijiFirst Government came to power in a free and fair election held in 2014 on “a level playing field” (FT 26/9). NFP leader Professor Biman Prasad states the FijiFirst Government came to power through “the barrel of the gun” (FT 26/9). These are diametrically opposite views on how the FijiFirst party has come to be in power but I am sure the thinking people of Fiji can discern the truth from what has transpired on the political front since the 2006 military coup. RAJEND NAIDU Sydney, Australia

I BELIEVE human resource management in Fiji needs to be given greater recognition and respect. It must be seen to be done faithfully, without fear or favour. I believe Fiji badly needs to walk the talk in some glaring cases. Terminating employees simply because you do not agree with them is plain and simply heartless. Why deny them of their bread and butter? Why destroy their livelihood? I wish this to no one. It is painfully unbearable. It is most hurtful and so unnecessary in this modern day and age especially in the twilight of their career. I rest my thoughts, most respectfully. RONNIE CHANG Martintar, Nadi

WE heard a lot of testimonies and stories from families and friends who have claimed to be healed through traditional medicine and care which is a myth, but my advise to all women in Fiji, especially young women, please go for an early check up to the nearest hospital because cancer kills and does not discriminate anyone either young or old. I’m happy and honoured to be an advocate now on breast cancer together with my family especially my son and daughter since my wife and mother of our children is a breast cancer survivor. Since I cannot walk at length, climb mountains nor run because of my limited mobility to raise funds, I can raise awareness through the use of my pen in writing via the “Letters to the Editor”. Like the saying, “The pen is mightier than the sword” — Edward Bulwer-Lytton, 1839. For those who follow my letters on social or mainstream media local and abroad, please donate to this worthy cause any amount to the following Fiji Cancer Society M-PAiSA number 9986983 or Fiji Cancer Society Pinktober Awareness WBC Suva bank account #1271099900. Just write your narration as JMC F/T LTE – Pinktober 2022. JIOJI MASIVESI CAKACAKA Tadra, Votualevu, Nadi

HOW ironic a certain female politician is screaming “trial by publicity”. Yet in her deliberate attack on FijiFirst/The Sunday Times 25/09, she descended to drawing specific attention to the irrelevant charges of another politicians son, that is trial by media too. Poetic justice, me thinks. Besides, why not simply answer the legitimate questions the FEO asks her about the origins of her “Rock the Vote”, especially if there is nothing to hide? Why all her diversions? It is not even her idea, or original at all. I believe it is copied directly from the US. BORIS SNODGRASS Taunovo

Integrity of the PM’s speech

PRIME Minister Voreqe Bainimarama delivered a very strong speech during the 77th Session of the United Nations General Assembly in New York. Within his speech, he mentioned about his return from Her Majesty Queen Elizabeth’s funeral in England. He spoke highly of the Queen saying and I quote “… a leader who holds a special place in Fijian history and in the hearts of the Fijian people including my own”. I would like to question the integrity of the statement by the Prime Minister especially when his Government tried to sever all ties between Fiji and the Queen. During his time in leadership, the head of the Queen was taken out from the Fijian currency, the Queen’s birthday, which used to be celebrated as a public holiday, was abolished and finally the move to change the flag, not to reflect the Union Jack. Now can anyone tell me if our Prime Minister actually meant what he said that Queen Elizabeth II holds a special place in his heart? I do not believe so, therefore, I also question the integrity of his whole speech where many of the things he highlighted I find questionable. KOSITATINO TIKOMAIBOLATAGANE Vuninokonoko Rd, Navua

I FOUND the article “Degrading ecosystem” in The Fiji Times (27/9) very illuminating. The 20-year observations the marine biologist USP senior lecturer Dr Antoine de Ramon N’Yuert, who lives in the impacted coastal Laucala Beach area, highlights should be brought to the attention of the entire community. The three significant observations he makes are: l Coastal inundation – land along the coast swept into the sea by increasingly severe cyclones and king tides caused by climate change. l Coastal pollution/contamination – how indiscriminate dumping of waste has impacted marine life and the health risk of consuming sea food from the area. l Authorities inaction – what happens when authorities drag their feet on practical mitigation initiatives. A bad environmental situation gets worse over time which is what has happened in the Laucala Beach area. I know this because I also lived in that area and used to take frequent walks to the coast. It’s said on the environmental protection issue think global and act local. Unfortunately, at the local level, we haven’t done too well from the marine expert’s evaluation. But it’s never too late to do what needs to be done to arrest the environmental degradation. RAJEND NAIDU Sydney, Australia

No pain, no gain

THE Fijiana 15s side landed safely in the Land Down Under and went through their drills in a bid to make a massive statement at the RWC 15s tournament. Having beaten the NSW Waratahs to win the Super W title and going unbeaten, the Fijiana locked horns with the Sakura and Wallaroos, going down 28-10 and 36-19, respectively. The side played two warm-up matches against the NZ Wahine Maori and the third-ranked Canadians, beating the NZ Maori 32-10, but losing to Canada 24-7. Immediately after rubbing shoulders against Canada, the side left for NZ to prepare for the RWC 15s tournament which kicks off next week. The latest ranking shows that the Fijiana is ranked 21st and the side will face England (ranked 1), South Africa (ranked 11th) and France ranked (4th). It is going to be tough for the girls, but I’m positive they will play their hearts out and make Fijians proud. It’s a pity that we have been billed against two sides which are in the top four and centre their game in the forwards department. The fiery battle against Canada showed flaws in our forward pack which needs to be addressed by the coaching staff. If they can set our scrums and lineouts, our girls will be unstoppable. All the best to the Fijiana side! Indeed there is no gain without the pain that is set to come from the hard yards taken during training, RAJNESH ISHWAR LINGAM Nadawa, Nasinu

THERE are now five tobacco cessation hubs in the country to provide assistance to Fijians who want to quit smoking. But when will the Government ban tobacco growing and manufacturing in Fiji? Tobacco is a known serial killer allowed to freely do its deadly deeds uncontrolled. FERGUS GARRETT Vatuwaqa, Suva

FIJI’S first-ever national development squad for aerobics gymnastics is currently in Australia. The Gymnastics Federation of Fiji has created history as two of their teams are participating at the Australian National Clubs Carnival. Can The Fiji Times bring the gymnastics news coverage in its sports pages, please? DINESH KUMAR Ba

IF you wish to see humanity, go to town, sit around and you will see humanity. ALLEN LOCKINGTON Kava Place, Lautoka

MOST times we get caught up, in the humdrum of daily living, and think that’s what it’s all about and all there is to it. We need to step back to discern and examine things carefully, and you’ll probably learn and know what’s really happening. We really take to many things for granted, but life is an iceberg situation, more is hidden, than what is seen on the surface. EDWARD BLAKELOCK Pacific Harbour

I NOTE civil servants, not their minister, are replying to political comments from members of the Opposition. DAN URAI Lauroka

AFTER quite some time the front page headline news actually depressed me, provoking me to think twice about my own lifestyle. According to the article, World Health Organization (WHO) states that individuals aged below 70 die every two seconds because of non-communicable diseases (FT 27/09). Despite having a small population (less than a million), Fiji has been topping the list of NCD-related deaths, especially with diabetes. Sadly, we are part of this statistics revealed by WHO. If my arithmetic is correct, then around 43,200 people die in a day globally. Very alarming indeed. Let’s get serious about this. Definitely, I don’t want to be part of a statistics like this one. DINESH KUMAR Ba