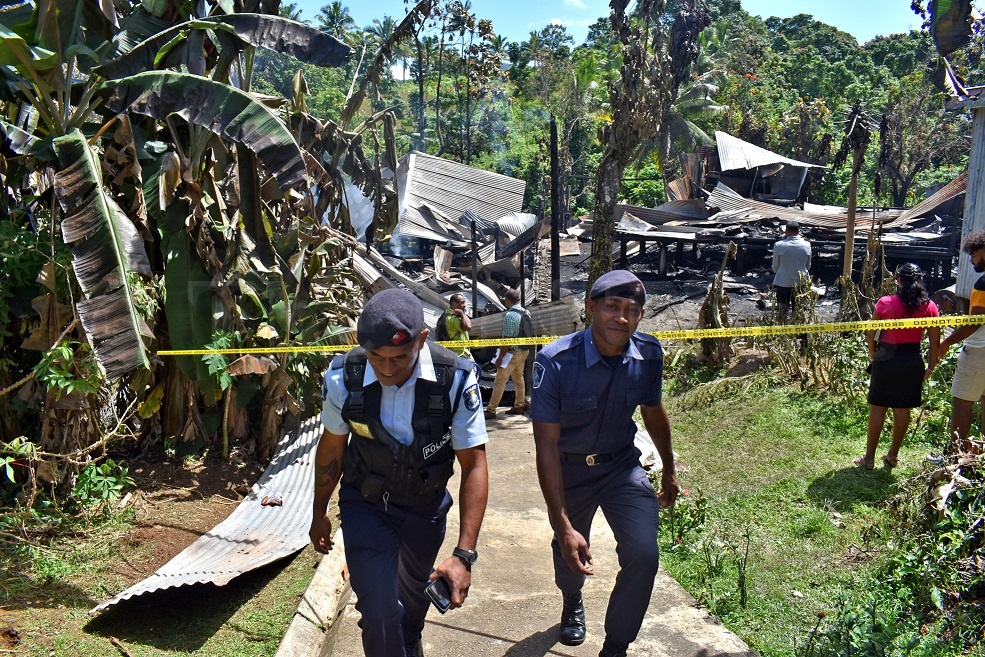 A six-month-old baby boy perished in the Nadonumai fire earlier this week (FT 20/9) and already many fingers are pointing at the unanswered calls to the fire emergency line, 910. I have reservations that a six-month-old child could light a matchstick, but if this baby did, where were the parents or guardians? How did the fire start? Why wasn’t anyone close by to save the baby? I know the fire authority will sift through the ashes to find answers, but first of all, please tell us about the missed calls. Samu Railoa Nadi

There is nothing unusual about a failed call to number 910. Just try calling the number. Allen Lockington Kava Place, Lautoka

The new King, of Great Britain, is apparently, a strong and avid supporter of the Great Reset and its long-term plan, for it to be achieved by 2030, or near then. Perhaps, we will see in His Majesty’s reign, a more urgent and concerted focus, to achieve the WEF’s overall vision and aims, and the G7s “Build Back Better World”, in the royal realm and the Commonwealth as well as the world. Edward Blakelock Admiral Circle, Pacific Harbour

We read in the media again of a volunteer group, this time from Nestle, cleaning up Tikaram Park in Lami to mark World Cleanup Day, something of which they must be commended for. Driving through Lami on Tuesday, September 20, it can easily be seen why these areas need such constant cleaning and I believe one reason is because Lami Council are not stopping repeating sources of litter. Lami Council are allowing the same culprits to dump their trash outside of their properties on non-collection days where it is spread by birds, dogs, cats and rats. The trash that is then spread around, much ending up in drains and culverts leading to the sea is left by these same irresponsible culprits as to them it is now someone else’s problem. When you have a local council that does not deal with these so obvious daily infringements of deliberate littering and degradation of the environment by a few someone needs to ask why. Is it because Lami Council have no pride in the area, don’t want to enforce their rules, don’t recognise the problem or that it’s simply easier to ignore things? Grahame Stageman Lami

I went home for weekend leave and accessed social media, which I haven’t done for a while because I attend a boy’s boarding school. I came across the story of the three drownings that happened within a short span of time. Three young males became the latest victims. One victim was a doctor who we went to the same primary school together at Votualevu Public School, a few years ahead of me and residing not far from each other within the greater Votualevu community. My advice to my peers, if you don’t know how to swim, please, do not go near a river or sea especially in unfamiliar locations. RIP to all latest victims. Jadon E Masivesi Nukuvuto, QVS

Congratulations to the new president and vice president of Lautoka Football Association. I was present at the local league games on Sunday and it was sad to see Lautoka officials forcing teams to play 60 minute soccer when everybody plays 90 minutes of soccer. I humbly request Fiji FA to look into this matter as during the NPC only 90 minutes of soccer is played and not 60. Something is really wrong either with Lautoka Football or Fiji Football as one of the vice president of Fiji FA was present during the local league games and everything happened under his eyes. I hope Fiji FA can clarify if club games are another form of bazaar soccer? No wonder Lautoka soccer never won any tournament this year because of reasons like this. Ashmeet Kumar Lautoka

Narube to PM: Start acting like a statesman (FT 20/9) and “tell people the election date well in advance”. Well, for one thing the well in advance time for the announcement of the election date has already passed. For another, a PM does not have to act like a statesman to tell the people the date for the next election. He has a duty to the people to do that. And the people have the right to know. That’s how it’s done in Australia’s democracy. That’s what the former PM Scott Morrison did without any dramas. Morrison was no statesman. Just an ordinary PM. Some say even a mediocre one. Rajend Naidu, Sydney, Australia

Thank you to Meli Laddpeter for the Back in History article about Miss Mary Mills. It is good to remember the people who came and gave so much to us here in Fiji. Miss Mary Mills was not the only one. There were three sisters, Mary, Bertha and Phoebe. In 1984 we moved house and were delighted to find they were our neighbours. I will share my memories, but at 83 years my mind is not as active as Phoebe’s was. I am sure there are others, especially in the Methodist Church, who knew these lovely sisters much better than we did, and have more memories to share. Miss Phoebe came to Fiji first of the three sisters, and was a long-serving teacher at Ballantine Memorial School. Miss Bertha came last after she retired from her work in Australia. Miss Bertha and I took over the weekly Bible classes at Veiuto Primary School. Miss Mary was the first to pass away, followed later by Miss Bertha. Miss Phoebe lived on surrounded by many stray cats and kittens that she would befriend. She was a delightful neighbour who would come across, to share an evening meal, and discuss all sorts of topics from books she had been reading to politics. Eventually, relatives in Brisbane added a retirement home for her adjacent to their house, with separate facilities so that she could be independent. We and her many Methodist friends were very sad to see her go. She lived on in Brisbane and died in 2016 at the age of 102 years. Tessa Mackenzie Suva

On behalf of our friends and families in Nausori, I raise this issue about the water supply in the area. What is the point of barking about free water when the taps are dry? Nausori has been on water rationing for a very long time now. Even more frustrating for the citizens is that there is no fixed time when the water will be made available. The authority turns the water supply on and off as it pleases. Even though mother nature is right there in the form of the Rewa River, Nausori does not have consistent access to water supply while Suva does not have these daily issues. Is this just unfair or bad governance? Kiran Khatri Samabula, Suva

Around 11am each day as I wait to exit at the RB Jet Centre traffic lights, I have a long wait for the lights to turn green. Much to the frustration of the drivers behind me too. FRA, why is that? Why is priority given to those on the main road while we have a long wait? Norman Yee Martintar, Nadi

We often hear of loans accumulating for our country, but we hardly hear of how it will be paid back or if there are any other alternatives. Kirti Patel Lautoka

A big congrats to the students of Navatu Secondary School for getting electricity after 29 years (FT 19/9). A grand opening by the Prime Minister must have carried a lot of weight. I like the initiative made by our PM to extend electricity and solar power to every home by 2026. Studying in lamps and candles brought many memories I had during my primary days. Today, we all live in a changing world, let us attend to all students’ needs as we uphold the banner that says “No child is left behind”. RODNEY CLARENCE RAJ Naleba, Labasa

The recent attacks on bus drivers is a disgrace. I seem to recall that overseas taxidrivers have a perspex shield behind them just for that purpose. It’s a small price to pay if bus operators can devise such a contraption to protect their drivers. Norman Yee Martintar, Nadi

So, what is the date of the elections? What is goment frightened of? Allen Lockington Kava Place, Lautoka

After spotting the word jealous, I had to double-check if it wasn’t April Fool’s Day already. Mohammed Imraz Janif Natabua, Lautoka