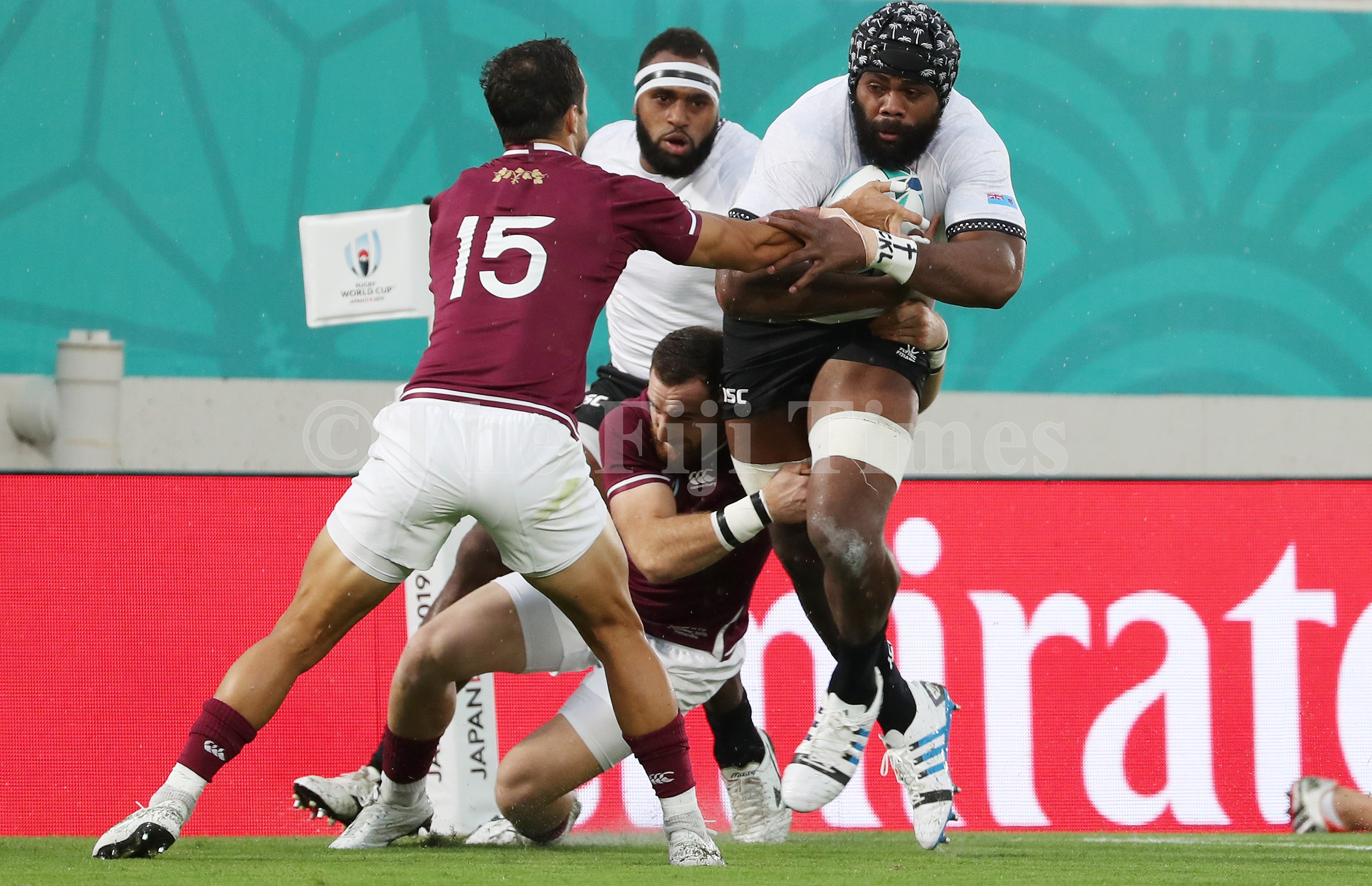 Fiji Airways Flying Fijians back row Peceli Yato breaking through the Georgia defence during their RWC pool match against Georgia at the Hanazono Rugby Stadium in Osaka. Picture: JOVESA NAISUA

If I may, my “Flying Fijians.

Your actions should express the priorities.

A lot of Fijians have played rugby, but few have in the arena you are in.

Make the one against Wales a daring adventure or it will come to nothing.

It’s not how good you are underneath, it’s what you do that will define you.

How will you use your talent?

What choices will you make?

Will you follow the script or will you be original?

When it gets tough, the tough get going: so will you give up or will you be relentless?

Pain of a loss and the ecstasy of a win will come hand in hand.

Ask, will you guard yourselves or will you get up and act when you fall?

For “He is able who thinks He is able”.

Like a Phoenix, from the ashes; rise and fly.

Give praise to the giver of your “strength”.

I hope there will be no missed tackles or sin-bin.

Focus boys, this game is really yours to win.

So that you are not the Flying “Home Early” Fijians.

Something to think about

Before the RWC 2019 I had written about how our team the Flying Fijians seem to be a team just for the Rugby World Cup, as we seem to revolve around it thus the reason there is no real growth.

I echo Long John’s statement about building up for 2023 and as I’ve always said I dream one day where the majority of our players will be local-based.

We seem to be on the right track, where we are participating in the NRC in Australia and recently the tier two competition in New Zealand.

What we need now is for the bigwigs in the white house to negotiate with World Rugby that instead of the end of the year tours to the northern hemisphere where we don’t get enough preparatory time and become like cannon fodder to the tier one nations, maybe we can tour other tier two nations with the majority of the players being local, tour countries like Russia, USA, or even Japan and have something like a two test series and then cap it off with a test against one of the 6 nations countries.

Also we need more game time together as a team, as is evident in the first game when it showed that the number of tests per player in our team was less compared with the Aussie players, which again is experience at test level rugby.

Look at our history at how many players have crossed the 50 test matches threshold, I believe we can count them in one hand.

So before we all start throwing Long John under the bus, let’s consider these facts, because it did show in the game against Uruguay, where we needed to be told at half time what to do, whereas the tier one nations because of the vast experience in playing at that level can make changes on the field in real time.

Anyway what do I know right, I’m just the common man.

So let’s keep that noble banner blue flying high and support our boys in the last pool game.

The Fiji Women’s Crisis Centre is extremely disappointed at The Fiji Times article (6/10) “Too Short To Handle”.

We believe the article is not only irresponsible journalism but also highlights how an ill-formed personal opinion can be viewed as a credible source of information when news outlets allow its publication.

We believe the views expressed by the writer are very sexist in nature.

We believe it reinforces the myth that women ask to be raped or be sexually harassed by their dress or behaviour.

Articles of this nature creates an environment of intimidation and fear for women and encourages perpetrators.

With the high rates of rape and extreme cases of domestic violence in Fiji, we believe such ill-informed views further encourage victim blaming.

The Fiji Women’s Crisis Centre for 35 years now has been advocating for gender equality and equity through working towards the elimination of all forms of violence against women and girls and sees this as taking us back and discouraging.

We believe women are blamed for the harassment and violence they suffer because of their clothes.

Despite the overwhelming evidence as to who gets raped — the youngest in Fiji being 4 months old and the oldest being 90 years inclusive of women, girls and children with disabilities.

It’s perpetrators, not skirts that are responsible for rape.

The Fiji Times has been a trusted media outlet for 150 years.

Please do not let the women of Fiji down.

I am sorry to raise my disagreement with the Minister for Education, Rosy Akbar, when she said and I quote “The reduction in the grant we anticipate to have no impact on the schools”. (FT 08/10)

I believe it is only logical to understand that when the grants are reduced the schools will definitely be affected and how can she say that the reduction will not affect schools.

The statement she made needed verification by analysing every school and their needs which I believe would be really affected by the grant reduction.

In addition, has the Education Minister been to all the schools in Fiji to be able to understand their situation?

If not, then I believe she is not in a right position to be making such a statement.

The Australian PM’s XIII has players that just completed NRL duties, whereas the Fijian PM’s XIII seems to have only locally-based players.

This begs the question why our top players in the NRL such as Maika, Suliasi, Waqa, Tui, Ashton, Tariq, Jason, Roqica, Montoya, Taine, Apisai and Viliame are not included in the match.

Where are the other players that played in the recent RLWC in 2017.

We need to remember, this match over the years, is an annual game between Australia and PNG players.

Look at the line-up in the Australian PM’s XIII and compare it with ours.

It seems we are not taking the match seriously or am I missing something that makes our NRL players not available in this match.

Sukha, don’t jinx it, Fiji is on a roll.

I believe the state of the Fiji Sugar Corporation has truly been revealed by the financial statements of the 2019 Annual Report.

This industry has been ailing and can somewhat be referred to as suffering from type 1 diabetes.

The sugar industry lacks something and millions of dollars will not save it.

Rather, it is sugar.

Having recently stayed in Wailoaloa, Nadi over the weekend, I took the opportunity to walk several times along the Nadi Bay Rd but was rather shocked with the way drivers were using the road.

This puts the lives of pedestrians and other drivers at risk.

For some drivers it’s more like a racing pitch.

One hopes that our authorities on the road conduct random spot checks at the weekends also, as it may not be too long before disaster strikes on Nadi Bay Rd.

We go into this RWC as the best prepared Flying Fijians team ever.

Words that will haunt me for the next four years.

Anyways, I wish you all the best in your last pool match.

Here’s a word of careful caution we should consider before taking on the might of Tier One Wales.

It is better to be confident from the silence of our hearts, then to utter the spoken words of confidence in predicting a win against the Welsh side.

It can come back to “bite” us badly.

We need to manage our gullibility levels, with inaudible respect.

Thank you Seona Smiles (The Sunday Times 6/10) and Edward Blakelock (FT 7/10) for your articles about Thurston Gardens.

Yes, even though an unused portion of the gardens will be converted, in time I am of the opinion that if the gardens wanted to expand, it won’t be able to.

To the authorities, please think with your heart, and think of the people’s wishes, the silent protesters, those who care.

Those who will come after we are no more, they will want to expand the gardens or the museum.

Give some other place for them to build.

I plead with you – show some love.

Whatever is the result between Fiji and Wales does not make any difference at all.

The most important thing is the quarter-finals, which seems impossible now.

The game against Uruguay is now water under the bridge.

A big blunder by the coach led the former All Blacks captain Sean Fitzpatrick to say that Fiji was disrespectful to Uruguay from the way they approached this game in terms of preparation, turnovers, missed tackles and no sense of urgency.

Michael Lynagh stated that the downfall was because Fiji was waiting for someone else to do the job.

It’s a learning curve for us, but the problem is, when the learning is going to stop.

My friend gave me a word of comfort by saying “another world cup is coming up soon in four years’ time”.

My support for the team, do your best, smother and choke the Welsh as if it’s the end of the world as the final whistle blows.

The final pool match for the Flying Fijians against Wales at the Oita Stadium is bound to bring the nation to a standstill.

Wales and Fiji have played each other since 1985 as Wales won the inaugural game (40-3).

Wales has won majority of the games, winning nine out of the eleven matches played.

On the other hand, the ’07 RWC clash between Fiji and Wales at the Stade de la Beaujoire in Nantes went into history books as the (38-34) loss to Fiji in their final pool game meant Fiji qualified for the quarters at their expense.

Fiji’s tries were scored by Qera, Delasau, Leawere, and Dewes while Popham, Shane, Martyn, Gareth and Jones scored for Wales.

Our boys played their hearts out and created a shocker that evening.

I hope our current squad has seen a replay of that match for they will gain a lot of self-belief and motivation from that historic win.

The scenes of jubilation and celebration from that win are vivid in my mind.

To the boys, be good ambassadors and play with guts and determination.

Put your bodies on the line and show the world that we meant business in the Land of the Rising Sun.

Fiji is with you and we will pray for you.