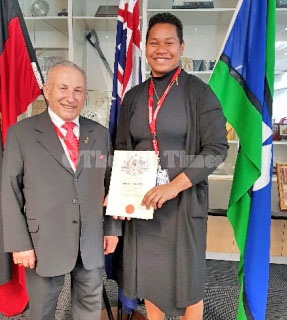 Eileen’s next big target in weightlifting

(FT 26/11) World Junior Weightlifting record holder Eileen Cikamatana is likely to miss the 2020 Tokyo Olympics because she missed the first year of qualifiers.

But the now Australia-based former Levuka girl is focused on the next big tournaments coming her way.

She said, “If I miss an Olympic Games there’s another one coming up, and another one — it’s not like it’s the end of the world.

“My next big target is the Birmingham 2022 Commonwealth Games — then the Olympics. In Paris (2024 Olympics) I’m not interested just in participating, I want a medal.”

You are indeed a champion Eileen and you with your age, could be competing in maybe five Olympic games.

Go, do your thing and make a name for yourself.

We often read that if anyone commits a crime they pay the time.

It is saddening to learn that one of the ingenious and enthralling fellow writers died late last week.

His letters were appealing, stimulating and hilarious which always puts a smile on my face when reading it in the morning.

During my many coffee breaks with him, I found him to be a humble person with great erudition and philosophy.

My condolences to the family.

Sevuloni Mocenacagi, Isoa Tabu and Kavekini Tabu made history after being named by Baber for the Fiji 7s team for the Dubai and Capetown leg.

I believe never before we have had such a selection.

The proudest of all must be the parents who were used to one and then two but now three.

Being together might help them on the field and they will be the stars to watch.

Congratulations to the brothers.

Ministry of Forestry permanent secretary Pene Baleinabuli’s statement that economic development cannot be done at the expense of the environment is a pretty contrary statement to make.

Mr Baleinabuli says that we are using the environment as a punching bag and it is not fair (FT 26/11).

Most development activities are carried out by converting natural land into a developed one.

Industrialisation and urbanisation are all part of development.

When we build roads, buildings, bridges, or clear land for yaqona and dalo farming, etc., we usually remove trees and plants and all that in order to serve us humans with essential commodities for our every day life.

Every development will affect the natural balance of our environment and its how we manage and use our natural resources that matters.

To develop we have to destroy part of our environment but we need to do it in a sustainable manner by protecting and conserving it as best we can so that we cause the least imbalance or negative impact.

Economic development can only be done at the expense of our environment and as long as we proceed to do so it will continue to be our punching bag!

A writer was asking how much it costs to lease the new A350XWB.

I am no expert, the field of aircraft leasing is very complex, and the best answer would be to ask Fiji Airways.

Of course that is rightly confidential, but based on internet searches, I believe a dry lease on a brand new aircraft could be minimum $US750,000 ($F1,642,388) per month.

Need to get a lot of bums on seats to cover that.

With the measles outbreak and the vacs in short supply!

I believe even the false accusations of a person of dubious morality can taint the reputation of an upright servant.

Doesn’t the public have the right to know about past mismanagement at the USP, the region’s premier institution for higher learning, which is what the report’s about?

Shouldn’t the public know the truth?

The rhetoric that the government of the day is not out of pocket is growing thinner every day.

I believe the evidence out there states the opposite.

I believe a confirmation would be their reduced budget in the next financial year, let’s wait and see.

Nakoba St in Lami is finally getting the overdue attention it duly deserved.

I met Dr Biman Prasad at the birthday celebration of Shiri Guru Nanak the founder of Sikhism.

He asked me to watch his full speech on video and after watching it I know it was Dr Biman who said it was a two-man government!

He also labelled it as zombie government too!

In some parts of the world, attacks on journalism is common.

This common practice has slowly made its way into the Pacific.

Journalism has its own set of legislation and touches everyone’s lives daily.

Despite this, many still have some sort of fear.

The school holidays are right upon us.

This is what some students were eagerly waiting for.

Now that we are into it, let’s hope we don’t get to hear of any mishaps with children.

This is the time for merrymaking and taking into consideration that we are in the festive season and mood, it would be better not to get swayed by the goodies and spoils.

I hope parents will be vigilant with their kids and keep them on track.

Will be good to engage the kids in some productive activities.

This is the most opportune time for it.

Many would opt for picnics and swimming, let’s hope they are well monitored.

There are also some fire tragedies recently where precious lives have been lost.

Let’s all be careful.

Students, please don’t get carried away and try doing some reading as well.

Perhaps taking some time to glance towards studies every now and then would be helpful for the following academic year.

Do enjoy safely and responsively.

Cars on our roads

Reading BBC news online (26/11) I came across this report — “A study says that living near busy roads can stunt children’s lung growth.

Children exposed to roadside air pollution could have their lung growth stunted by up to 14 per cent, a study suggests.

Living within 50m of a major road could increase the risk of lung cancer by up to 10 per cent, the paper also found.

The study of 13 cities in the UK and Poland found air pollution contributes to a higher chance of heart disease, strokes, heart failure and bronchitis.

The report written by King’s College London analysed 13 health conditions in people living in high pollution areas and compared them to the general population.”

Then we look at the traffic jams that snake at snail’s pace each day along the Suva-Nausori corridor where passengers sit in vehicles for lengths of time going to work or school.

Surely they will be inhaling exhaust fumes.

This will have an effect in the long run, if we do not do something about it.

And here I am reminded of the soot being emitted by our ailing Lautoka sugar mill.

At a certain supermarket in Lautoka, I believe there is no washroom and yet they are operating a restaurant there.

Can Lautoka City Council throw some light on this?

Can Premila Kumar justify this?

Years ago a young friend of mine growing up in Raiwaqa referred to the road sweeper as the SCC man.

He spoke with respect for the man whose job he considered important.

Sadly now, respect is a rapidly disappearing value, and shame on our politicians for their lack of respect for each other in Parliament.

They also lack respect for our intelligence when they expect us to be content with “matters are settled” with no details given and no change with regard to the matters of concern.

Unfortunately, this is all resulting in dwindling respect for them as our current leaders.

Meanwhile, our respect for our journalists rises as they courageously investigate, analyse and report on the many issues of concern to us the public.

And thank you, Fred, for your article about the recent journalists’ forum and the valuable relationship and mutual support building that the forum enabled.

You do indeed give us hope despite the many challenges.