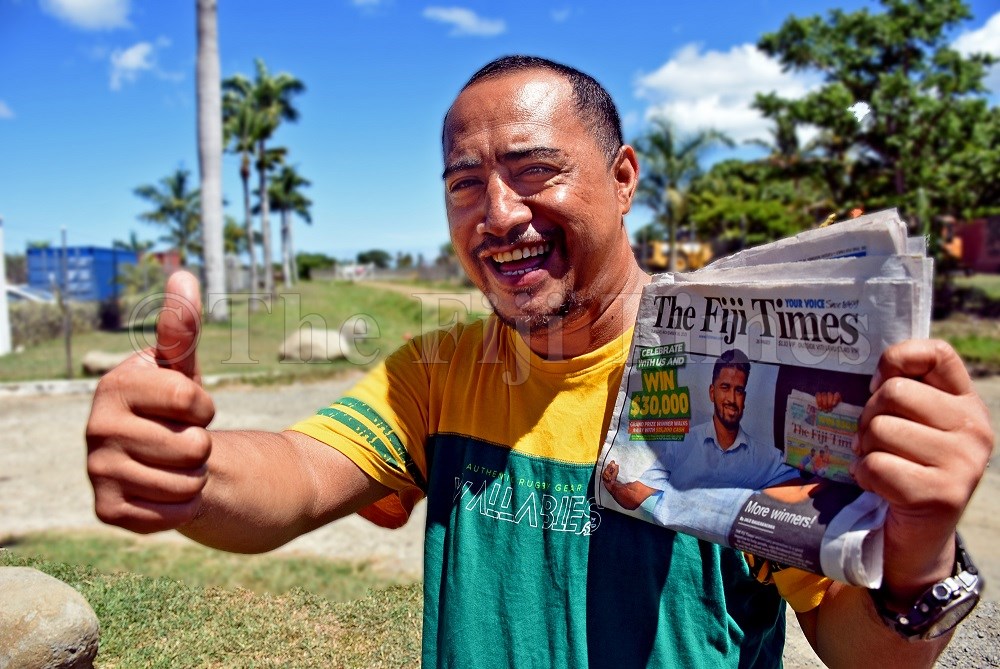 Adrian Blaise Sanipate from Rifl e Range Lautoka said he was surprised, excited and happy when informed he had won $152 as part of The Fiji Times’ 152nd anniversary promotion draw. Picture: REINAL CHAND

Adrian Blaise Sanipate expressed his delight as he walked home $152 richer after winning the 152nd anniversary promotion for the month of October. It gives me immense pleasure to read the thoughts of our winners and their opinions on the impact of the people’s newspaper on their lives. Adrian, who was over the moon after winning $152, classified himself as a loyal reader of The Fiji Times, and he preferred reading the newspaper, which has become a habit, because it kept his mind fresh with interesting stories and informative news articles. He thanked The Fiji Times for keeping the public at large informed about current affairs over the years. I’m sure the critics of Fiji’s most widely read newspaper will keep this in mind the next time they plan to launch an attack on the newspaper many readers hold close to their heart. Rajnesh Ishwar Lingam Nadawa, Nasinu

You have big, loving and caring hearts, Sofi and Farina, for your sons, Filimoni and Asif. This is the real compromising and sacrificing unique case in diverse cultures, customs and religions in Fiji’s plural society. The Fijian way all Fijians are appreciated and admired by many. Vinaka, The Fiji Times editorial (FT 23/11) for your emotional and inspiring publication on “When love and hope stand out”. “You always had a roof over your head and if you stick with me, you always will because I am always your mother, I know what is best for you because that is my job.” Tahir Ali Hamilton, New Zealand

Viviene Westwood said “Fashion is very important. It is life-enhancing and, like everything that gives pleasure, it is worth doing well”. I would like to congratulate Fiji Fashion Week on the opening of its first Virtual Fiji Fashion Show this week and compliments to whoever came up with the idea. I’m not a fashion icon but I do appreciate beautiful clothing and it was a pleasure to watch veteran and young designers show off their latest creations on Fiji One. Janine Rakuita Makoi, Nasinu

Compensation is one thing but think about the emotion of those mothers whose babies were switched 27 years ago. Pay close attention when it comes to emotions and feelings. The luggage of those two valuable things cannot always be top priority as brains have to go along but a mother’s emotions, only a mother will understand. Destiny is such but it also makes one realise that those pain and suffering only moulds one to become stronger. Try asking a mother who would have had to stay away from her child due to unforeseen circumstances. We are living in the era where a woman understanding another woman would be a great achievement. This world is too judgmental and quick at jumping to conclusions and assumptions. Imagine the joy of the biological parents at the meeting of their child. No feelings on Earth would exceed that, for sure. Hope for this family to be in touch with each other with the understanding that things cannot be undone and acceptance and patience is the only way forward. Kirti Patel Lautoka

Once again, that famous gentleman from Macuata has delivered another simple but powerful message. Dr James Fong, the permanent secretary for Ministry of Health has reiterated a need for us to adhere to safe practices and prepare for a possible third wave of COVID-19. Our interactions over the festive season in December and January is critical as this could prevent or lead to another outbreak. We have already been through this twice and should this occur another time, the third wave may inflict more painful and devastating impacts. Let us take precautions and not become easily swayed by a joyous period over a few weeks because if we are not careful, the negative impacts will last over many more weeks in 2022. There is a saying that prevention is better than cure but this is only as good as our attitudes and decisions. Floyd Robinson Toorak, Suva

The Waimari bridge here in Rakiraki has been broken since Cyclone Yasa in December last year. It’s approximately less than five metres in length and there has not been an effort made to repair it. It only makes life difficult for schoolchildren, farmers and villagers who depend on this crossing to cross over to the other side for their daily chores. I don’t know whether the minister responsible is aware of this issue or not. People now have to fork out more to use alternative routes just to reach their destination on the other side. Hope those responsible for this issue will resolve it before the year ends.
People are suffering in this area for almost a year now. PITA SOROAQALI Rakiraki

I WOULD suggest to the heads at the Education Ministry to stop making things complicated for the teachers. If the teachers get together to stand up against the MoE, demanding practices and go on a strike, who will replace them to teach our sons and daughters? Take it easy, honourable Premila, you’re on a different field, by the way. AREKI DAWAI Suva

NOW, when there is news about the SODELPA crises, I just look the other way. I think it has become part of the new normal. MOHAMMED IMRAZ JANIF Natabua, Lautoka

THE existence of derelict vessels in Suva Harbour is not something new. Acknowledged, their removal lie fairly and squarely in the hands of their owner/s. Generally, such dereliction occur when owner/s is/are faced with financial difficulties. Proper removal and/or appropriate sinking of derelict vessels is extremely expensive, to say the least. When derelict vessel owner/owners plead inability to handle such costly removal/sinking, what alternate legal courses are available then, without taking “forever” to rid Suva Harbour of these eyesore? On a separate subject, it is always a very sorry sight to see pieces of coral reefs being sold along the Lami foreshore settlements and certain villages along the Coral Coast highway. Respectfully, such sellers do so to provide their families daily sustenance. There must be a suitable alternative. Whilst I try hard to understand your plight, please do not destroy our reefs. All authorities concerned must address the ongoing destruction of our reefs without delay. Please do not look the other way. All responsible officials concerned must act to correct such destruction. Ronnie Chang Martintar, Nadi

IN 1971, the inimitable Marvin Gaye released a song called, “What’s Going On!” It was primarily a protest song about police brutality in the US and so many social injustices that were plaguing the mainly Afro-American population. Tragically on April 1, 1984, Marvin Gaye was shot and killed by his own father. Whenever I hear the song, it reminds me of not only the great loss of an amazing musical genius but also the many tragedies and injustices happening all over the world. It also reminds me of the many injustices that have plagued our own little piece of paradise. As I watch from afar with great interest, I sometimes wonder “What’s Going On!” Why is Fiji in such a vulnerable state on so many fronts? Who’s really running the show? And why is it that so many Fijians are disgruntled with the performance of the FF party Government? Seriously, What’s Going On? Colin Deoki Australia

I believe we are experiencing different kinds of changes before the possible occurrence of a cyclone, especially the rise in temperature around us. We should observe everything around us from plants and organisms to changing weather patterns. By doing this, I believe it will at least give us some time to prepare for a cyclone. Kelepi Dakuiyaco Waikalou navua

IN his maiden speech to Parliament our new President has warned the hotel operators that rising room and food prices would scare away tourists (FT 23/11). But I was disappointed that there was no mention about the rising price of basic consumer goods which many are finding unaffordable. It begs me to ask: are tourists more important than the locals? SELWA NANDAN Lautoka

IT so nice to see the President in Parliament but why does he sit on the Speaker’s seat? Sukha Singh Labasa

“OUR Parliament is very disciplined, and we don’t throw shoes at each other, says Standing Committee on Justice, Law and Human Rights chairman Alvick Maharaj.” Very disciplined? Oh dear. I wonder who wrote the speech. Allen Lockington Kava Place, Lautoka

ANY party for our COP26 returned warriors? Sukha Singh Labasa

I FOUND that subtitled in one of the television network and I quote, ‘Ministry expands road network’. I wishy wish that subtitle focuses on Vanua Levu, especially the Tunuloa side of Natewa Bay. For too long we tread on horse tracks, crops on our shoulders, the old and sickly are carried and etc. We urgently need a new road please Mr Minister. Jioji O Toronibau Navetau, Tunuloa

HAVE people noticed that there is now less praying and fasting by political parties, those blowing their own trumpets and beating their own drums have put their musical instruments in storage and the grog dopes, well they seem to have retreated into their Mickey Mouse holes, where they belong. Perhaps I should have let sleeping dogs lie. Jan Nissar NSW, Australia

Confidence is obviously a good thing but over confidence can be costly. I’m sure the message is getting across for whom it’s intended. To become a good person or a good writer does not necessarily mean to criticise everything and anything about our beloved nation. Remove a bit of negativity to see that other side but then again, who says “there is no freedom of speech”. Kirti Patel Lautoka