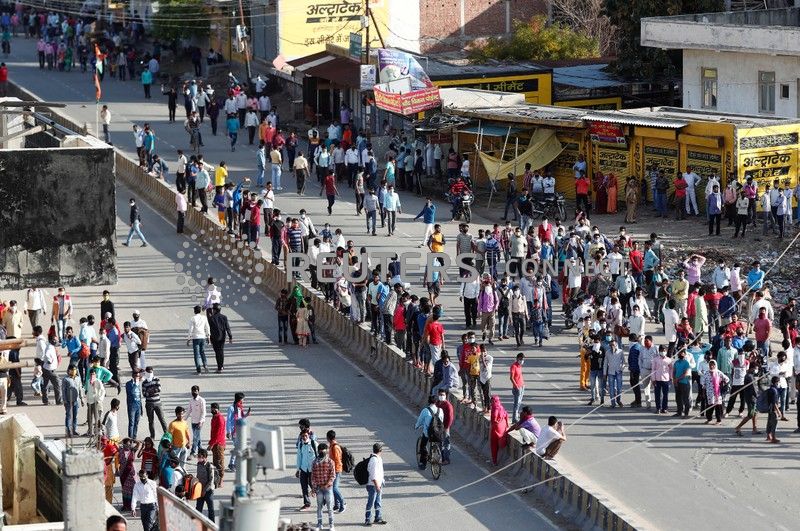 Migrant workers walk along a highway with their families as they return to their villages, during a 21-day nationwide lockdown to limit the spreading of coronavirus disease (COVID-19), in Ghaziabad, on the outskirts of New Delhi, March 27, 2020. REUTERS/Adnan Abidi

Historic issue on a global scale

It’s unprecedented and a first in the world’s history and definitely in our lifetime.

A major proportion of the global population is forced to be confined at home in quarantine, in response to COVID-19.

Whole countries are in lockdown and curfew mode, with travel and movement restrictions in place.

The once unstoppable global engine for economic growth is basically shut down.

It’s eerily quiet in the once bustling cities and workplaces.

The nights are even more quieter too.

However, online activity and e- communication has ramped up to levels, possibly beyond the capacity of existing systems.

Perhaps the benefits that is coming out of this extraordinary turn of events, is the positive effects on our global and local environment.

There is obviously less pollution now.

The land and marine ecosystems, have been given a breathing space to recover and regenerate.

We may in fact achieve, the previously difficult to achieve carbon emission targets as per the 2015 Climate Change Agreement.

All these from the unlikely and indirect effects of a microscopic invasion.

No one would have guessed that I’m sure. Perhaps such virus infection disappear and reappear at intervals in different forms.

MERS, SARS, ebola and the measles are examples.

From the hard lessons we are learning from COVID-19, I am sure we will all be ready and more proactive next time.

I think neither the Government nor the Opposition can claim to be representing just over 50 per cent or just about 50 per cent of the Fijian population respectively.

If they refer to population, I believe this would be an accumulation of total valid and invalid votes cast (November 2018), about 180,000 registered voters who did not turn up on polling day and those who did not meet the age requirement as per relevant regulation.

As I understand, seat allocations are based on valid votes (verified) cast and counted.

Therefore, I believe both sides could lay claims based on the total number of valid votes cast in November, 2018.

Is applying for FNPF helping people?

I believe, no, not really!

I believe people have misunderstood the channel of leasing with FNPF because it is their employers who should be contacting FNPF for the assistance-program and not the employees themselves.

After which I believe the employees are to then access the Unemployment or Lowered-Income-Assistance forms from their employer.

The news showed footage of how FNPF buildings were the centre of activity on Monday where people queued shoulder to shoulder without considerations of “social distancing”.

It takes just one infected person in the midst of the crowd to spread the virus and with the current medical facilities we have in Fiji, we cannot afford to increase the number of confirmed positive cases.

Isn’t there a way people can apply from home after acquiring the forms from their employers?

If there is already an existing online portal, are proper measures being put in place to make the public aware of this?

Most if not all have access to the internet and would be able to apply from the comfort of their own homes.

For those who don’t, FNPF can probably have booths set up in each suburb centres and rural areas where they could have a rule of allowing only 15 people at a particular time.

The number of booths would entirely depend on FNPF’s “manpower” and tech availability.

All these are easier said than done, however, if it was possible, it would be a good way of preventing the unnecessary spread of coronavirus.

Prevention is better than cure!

The Sunday Times is always a good read.

His article is especially challenging.

Indeed this crisis is an opportunity for learning and changing our lifestyles.

We have time and impetus to get rid of bad habits, to become more caring of others, and more considerate in our actions that affect others and our environment in adverse ways.

I hope the lessons will be truly learned and remembered.

Here, people are breaching the COVID-19 lockdown and curfew.

In New Zealand, I believe someone stole the tent which was used to test people for COVID-19.

Even though it was bolted to the ground.

Must be a very nice tent.

Seeing hundreds of people lined up in front of the FNPF office melts hearts.

We have amongst us people who are in a desperate situation.

I wish a little bit more awareness was carried out on how people could access their FNPF in this difficult time.

It seems that our citizens have little idea about FNPF procedures during COVID-19 crisis.

Since the Attorney-General announced FNPF assistance on Thursday people have been crowding up in front of FNPF offices.

I’m sure they need a little bit of guidance and support.

Where are all the freebies now?

I believe some think it’s inside FNPF.

What are people going to use in their retirement?

Not all are lucky to be working even after reaching retirement age while the youngsters are there looking for jobs and not able to accumulate in their FNPF.

I reckon, a good initiative to be implemented by our government when school resumes, is to provide, apart from free milk, free soap to all schools.

WHY do TV presenters and radio announcers so like to pronounce “dub, dub, dub” instead of beautifully saying “w, w, w” when referring to a website address?

Are armed military personnel a necessity on the streets of Lautoka to maintain law and order?

I believe men flashing big guns in town will naturally create avoidable fear and anxiety among the already panicked population.

I suggest substituting those weapons with a long daanda (stick) instead as law enforcement officers are doing in India at present.

Wack them if anyone does not toe the line.

During the lockdown in Lautoka, many posts on Facebook have been about having a backyard garden.

There are people who were brought up by parents who had backyard gardens and they inherited that desire to plant a few vegetables in their backyard.

There are people who grew up with parents who also did the same.

Some people come from farming backgrounds and for them backyard gardening comes naturally.

Now there is a flip side to this.

In these modern days husbands and wives both work, and they earn a healthy income and the backyard garden is the market.

They have more than enough finances to support the vendors in the markets by buying their produce.

Your paper reported that 26 Fijians are stuck in India and are not able to return because of the lockdown with no airlines flying and they are fast running out of money.

I believe if we were to listen to SODELPA, these people should be left to fend for themselves as the Fiji borders are closed.

They should not be allowed in.

What if these people were Niko Nawaikula or Lynda Tabuya’s family members such as their sons or daughters or their parents?

What would their feelings be then?

There are thousands of Australians returning to Australia each day as we speak and thousands will continue to return.

They are all being forced into compulsory 14-day isolation.

Some of these returning people may be infected.

We will not know until days later.

So from the likes of SODELPA barking about closing the borders, I believe you talk rubbish.

While it is absolutely important that all respect the restrictions in movements introduced by authorities, there is certainly some citizens nervously awaiting a review on the lockdown of Lautoka later this week.

As we approach the end of current lockdown period for Lautoka, some will be holding their breath.

This will include those who reside in Lautoka and provide care for the elderly including the sickly and those with special needs, but cannot cross the border.

Some parents are eager to reunite with their children, especially infants.

For some, the desire to reunite with their family members is testing their patience.

Some work in Nadi but live in Lautoka are anxiously awaiting the opening of borders.

There are also those who live in Nadi but work in Lautoka.

All in all, only time will tell whether the borders are re-opened later this week but for now we must continue to co-operate with authorities.

Government must be applauded for its effort in containing the pandemic in our nation so far.

However, looking at the facts leading up to this crisis, I believe that a bipartisan approach must be adopted by the nation’s policymakers whenever we encounter anything of similar nature to ensure that the best possible precautionary measures are taken to safeguard the citizens of this country.

It may involve an in-depth self-assessment of ego on one side and humility on the other, but hey, we’re talking about the lives of people here.

To all the hardworking medical staff, civil servants, police and military officers, the nation salutes you.