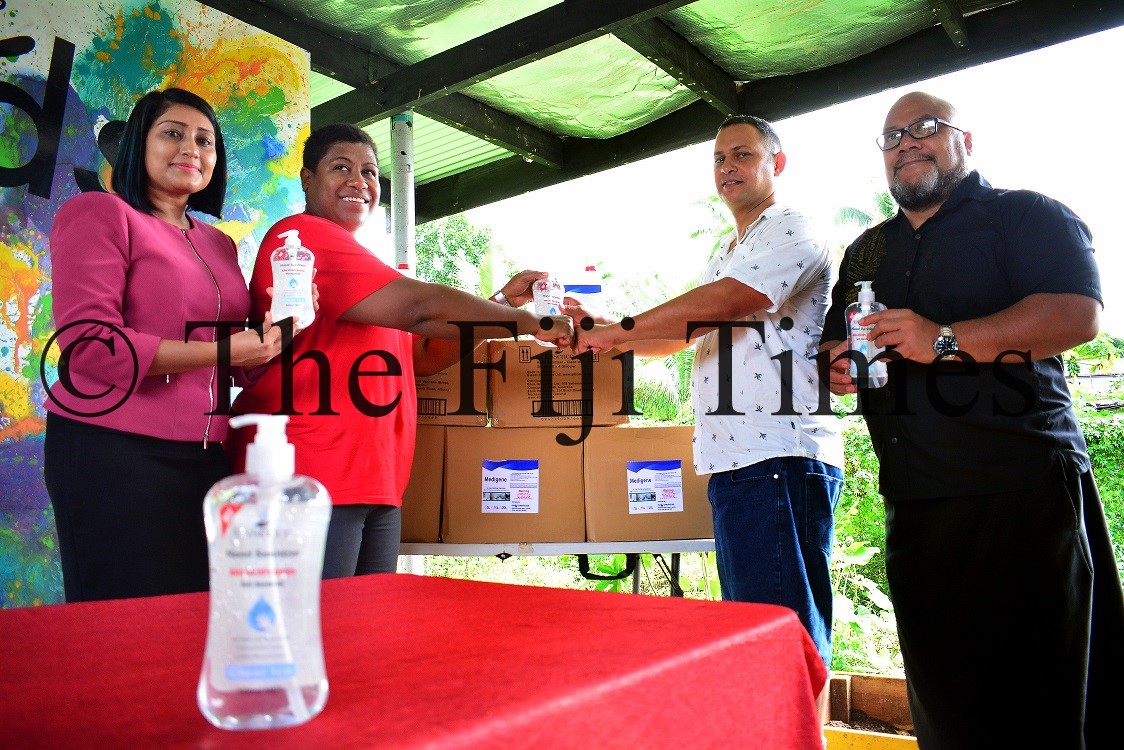 I extend my thanks and appreciation to Fiji Chemicals for the generous donation of about $10k worth of hand sanitisers, hospital rated disinfectants and liquid soaps.

It was a kind gesture from Fiji Chemicals in aid of the wellbeing and overall hygiene of our little ones who are suffering from cancer and are susceptible and prone to other diseases and sicknesses.

Times are hard but the staff and management of Fiji Chemicals did not hesitate to make a timely donation to a group of kids who need all our love, care and support.

To WOWS Kids Fiji co-ordinator Taholo Kami — thank you for your inspiration and leadership.

To the gang at Fiji Chemicals — a big vinaka vakalevu for your generosity!

The Government revenue has been affected by COVID-19 and the cyclone.

When any business starts to have financial issues, the first thing it does is cut the cost down.

For Government, first they can reduce the size of ministers, Fiji doesn’t need assistant ministers at this moment, so cost saved.

Imagine the amount of money that will be saved. Imagine if only some of the above are considered Fiji will become a better place to be.

Knowing very well how difficult it is to keep children focused and on track with their school work in a regular classroom setting the best of times, let alone with all the distractions that are out there for children doing their school work at home at this time.

While the students have been given materials on which to work at home, it seems the teachers and the Ministry of Education are expecting all children to be concentrating on their studies with no follow-up or monitoring from their schools.

After the materials have been issued, they must feel they have done their job.

Only the final grades will tell this or not, no doubt.

For now, it seems, many children are treating this time as an extended holiday and what rhymes with holiday: play, play and play.

Thank you Simon, it has been an experience handing out food packs to those who have been affected by COVID-19.

After this, I may need to see a shrink to get therapy, because of all the despair and dire circumstances I have witnessed.

But I heard grog from the North is the best cure.

As for the farmers’ advice about seedlings for backyard gardeners, it’s about the success rate the seedlings have over seeds.

People have been known to take seeds and decide they will plant later. Some people will be starting new gardens and don’t know a “fork from a spade”, so to speak.

We have been on the ground helping farmers since TC Evan, TC Winston and when heavy rains caused flooding and damaged crops.

By the way, do you have some watermelon seeds, the seedless ones? Taki one big bowl, Simon.

I am not surprised to read “Education a way out of poverty for Kauyaca” in The Fiji Times June 2.

According to the renowned Fiji historian Dr Ahmed Ali, education was the passport out of poverty for the children of the Indentured Indian labourers in Fiji.

Hence the pioneering effort that was put into it by the girmitiya generation by establishing schools in Fiji.

The rest is history for that community in terms of its social mobility.

And, it’s great for the country that ethnic Fijians too are now attaching the same importance to education.

Only good can come out of that for the country as a whole.

Debra Sadranu was very quick to defend the selection process and decision-making of municipal councils that she chairs.

Can she be quick enough to tell the people why the unfinished botanical garden swimming pool project has cost so much and how many more millions is required to finish that swimming pool as per specification?

I’m beginning to wonder if the potholes littered on our roads are also an act of God.

Wouldn’t it be fair that EFL reconsiders its stance on bill payments by re-looking at extending due dates, allowing for partial payments, accessing the security deposits and also examining its pricing structure during these difficult times?

Do you know what is not available now at all supermarket stores Fiji wide?

Can anyone guess? Yes, it’s the eight-letter word “Pick Me Up”.

The real taste is there.

I believe it’s more than a decade now.

What can be the reason?

Maybe time for Government to ensure duty-free on all solar-related panels and accessories, making them affordable to low-paid workers.

It will reduce domestic consumer bills.

May assist EFL coping with industrial consumer demands in the future.

Before more people start giving their opinions about “act of God”, I suggest they Google the term “act of God legal definition”.

If they then do not understand the meaning of the term then it would not be unreasonable of me to conclude that the size of the brains of some people are directly proportional to the size of the country.

I believe everyone appreciates the former governor of the Reserve Bank of Fiji’s advice to Government on ways and means to cushion the effect of the economic downturn.

Well, almost everyone except for the honourable Minister for Economy.

It’s looking a lot like “act of God” has the same meaning as “off the hook”.

Is that what’s really behind this slogan?

Jan Nissar (FT 08/04) stated, “one thing Fijians must do is not to listen to the opposition parties” (SODELPA currently suspended).

However, he made a U-turn (FT 09/04). He suggested that Opposition members of Parliament (SODELPA currently suspended) should work together to provide alternative solutions to the current unprecedented crisis.

Now, the gentleman suggests that people’s criticism of the A-G’s characterisation of COVID-19 as an act of God is ill-informed (FT 02/06).

I understand Australia with other nations are pushing for an impartial, independent and comprehensive inquiry into the COVID-19 pandemic.

Mr Nissar, without turning the U-turn into a roundabout, why bother with an inquiry?

Joji Kotobalavu’s excellent article (FT 30/06) commemorating the 62nd death anniversary of Ratu Sir Lala Sukuna is superbly written and clearly shows the vision of inter-ethnic co-operation and multiracialism that this statesman had.

He had made possible nearly 40 years of relative stability in land tenure arrangements for the commercial use of customary owned land.

This led to the growth of sugarcane farming and relative prosperity of the country.

Customary landowners were like tenant farmers and contract farmers of the Australian owned Colonial Sugar Refining Company (CSR) not happy with their share of the revenue generated by the industry.

Cheap access to leaseholds and taking the largest share of the earnings from sugar exports ensured that CSR made “super-profits” in Prof Wadan Narsey’s words for the period until its departure in 1973 (Narsey, 1976).

Both the issue of duration of lease arrangements and rent lease calculations have dogged the industry since the mid-1990s.

It is not clear to me if the current arrangements are satisfactory for landowners and tenant farmers.

During Ratu Sukuna’s days, indigenous Fijians were treated paternalistically by the colonial authorities, two generations on, landowners must have greater say in the leasing of their land with the TLTB facilitating land lease transactions, and keeping records.

Goodwill and co-operation continue to be pivotal in the relationship between tenants and customary landowners.

I write this open letter to commend the efforts of Premila Kumar, the Minister for Local Government and K. Bhindi Brothers Ltd in their joint effort to resettle the squatter families from Nanuku and Veidogo settlements to be relocated to Makoi in a well planned and well-serviced housing blocks.

This is a huge achievement and will go a long way to bring a sense of respectability to these squatter families.

Squatter settlements in the Suva-Nausori corridor have been of immense concern to the government.

Finding a solution has never been easy. Many attempts were made to relocate or remove squatters but all failed.

Therefore, this joint venture success story now needs to be applauded and appreciated.

This will enable K.Bhindi Brothers Ltd to develop their property into an industrial zone which will provide much-needed employment to our people.