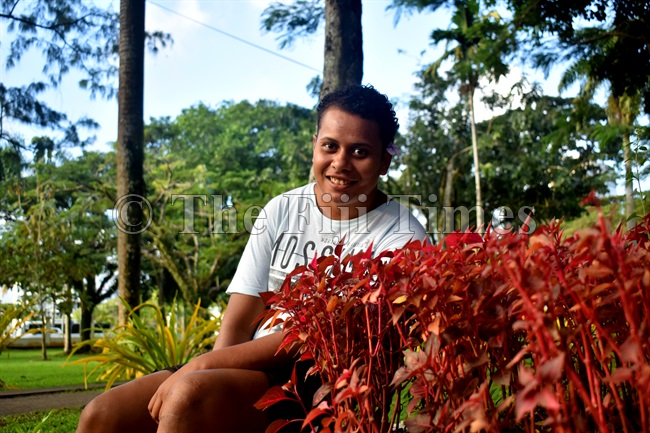 The picture of Domo Vou Talei finalist Titilia Lacanivalu at the Thurston Gardens added excitement to the front page of the trusted brand (FT 28/06). Sharing her story, Lacanivalu said that she was ecstatic when she got the call that she had made it into the top 10. Titilia, who was motivated by the Fijiana 7s team to play rugby, shared that she was fortunate to be among living legends of the music industry in Fiji. She considered a blessing to have met the likes of Sunia Soko, Seru Serevi and Laisa Vulakoro. Her song, which is titled Mountain Spice, is based on real life experiences. Wishing Lacanivalu all the best! Rajnesh Ishwar Lingam Nadawa, Nasinu

Traffic light damage caused by reckless drivers is only becoming too prevalent in Nadi. Remember how long the lights near Shop N Save at Namaka had been out of the service as a result? Just when it had been restored, a light in Martintar near Mt St Mary’s suffers the same fate. I think it has been a month since it was struck and damaged by that incident. Let’s hope that the disruption experienced by motorists is not long-lived this time around. It is advisable that we have back up parts readily available. That way we can always keep the traffic flow smooth. Thank you for your attention. Suresh Chand Nadi

According to the learned A-G Aiyaz Sayed-Khaiyum children scavenging at rubbish dumps and selling food parcels in the streets is not necessarily an indicator of the poverty situation in the country (FT 27/6). What is? Can the learned A-G tell us what he regards as manifestations of poverty in Fiji? Meantime I will regard the FCOSS findings on child poverty made available to us in The Fiji Times reports as valid analysis of poverty in contemporary Fiji society. Rajend Naidu Sydney, Australia

A writer complains about the filthy state of our Marine Drive and blames the Lautoka City administration for their failure in preserving this iconic site (FT 27/06). Perhaps we should not be exclusively shifting the blame to the council, but rather educating Fijians on littering and its impact on the environment. On my regular walks to Marine Drive, I have observed many families, lovebirds (both young and old) and individuals haphazardly discarding trash along the seawall including empty pizza boxes, fast food wrappers, PET bottles, takeaway containers and even used diapers! It becomes a field day for the stray canine population who further assist in strewing waste all over the area. An eyesore indeed! If feasible, the LCC can possibly deploy rangers to monitor the situation mainly in the weekends and spot fine anyone who irresponsibly abandons their refuse. The Sugar City had been voted the cleanest city not too long ago and let’s collectively plan to keep it that way. Nishant Singh Lautoka

Funny how some people criticise Fijian leaders for changing their minds while themselves migrating Down Under and yet cannot stop pocking their nose into Fijian politics. Flip-flopping between their homeland and newfound land. Edward Kumar Lautoka

Take some time out

AFTER watching the video of our former PM dancing to an Indian song with Fijians living abroad I felt that he is into it with a full smile as he looks content. Good on you Mr Rabuka. I guess the honourable Mr Bainimarama should also take some time out as my youngest son Isaia Tora would sometimes say “enjoy mada”! Best of luck to both of you SR and VB. AREKI DAWAI Suva

Shouts of sheer joy, could always be heard, when the boys, score a try to take the lead. The cries then turn to despair, when they once again throw away, the lead they had earlier, in the game that day. The ups and down, of our wavering fortune, can be way too much, for the weak hearts amongst us. It’s sometimes hard to remain strong, when things turn around, and just go wrong. and no way back can be found. Edward Blakelock Admiral Circle, Pacific Harbour

It is interesting to see the face of the Attorney-General and Minister for Economy Aiyaz Saiyed-Khaiyum in almost every function and occasions all over Fiji. Where was he in the past three years? Instead of talking about real issues the Fijian are people are facing today, I believe all he is doing is talking bad about other people, political parties, and even social media as well. To Mr Sayed-Khaiyum, when people or other political parties talk about real issues facing people of this nation, to him they are trying to politicise the issues. Please Mr Attorney-General and Minister for Economy, stop making a mockery of yourself by diverting people’s attention to unnecessary matters and talk about real issues the people of this nation are facing. KOSITATINO TIKOMAIBOLATAGANE Vuninokonoko Rd, Navua

Poor and the needy

Poverty is something that cannot be ignored or swept under the carpet. Having more than 50 per cent of Fiji’s population under poverty is not a joy ride in the park. Many statements can kick in stating otherwise to show a different picture, but sadly the suffering is real and only those who are facing it, know better. It’s easy to sit in an air-conditioned office or stand at the back of the counter at a shop and do the blabbering which reflects how content life is for some, ignoring the hardship of which they are not willing to take responsibility. It’s easier said than done. Will be good to have the government after next election which can think of daily bread and butter issues for the poor. Some of the rich seem to be in praise of the ruling parties not realising change is inevitable. Nothing is constant and the opposition are very much concerned about the poor and needy. The NFP/PA is very much concerned and are highlighting the facts on the ground of the real struggling issues. While it is a good thing to be appreciative and acknowledge the present government, embracing change is always expected. Let’s hope for the best and for that best, voting wisely is the key forward. We can either sit and complain or go out and do something about it. The choice is yours. Kirti Patel Lautoka

Yes, it may not have the snappiest title, but the International Day against Drug Abuse and Illicit Trafficking is a key plank in the United Nations. Drugs are banned in most parts of the world, yet its consumption and trade increases every year. Drug abuse is not the right thing; addiction and uncontrolled usage tear apart the consumer and everyone related. June 26 of every year is observed as International Day Against Drug Abuse and Illicit Trafficking. It was declared by the General Assembly of the United Nations as a day to strengthen action against drug trafficking and also to seek cooperation to achieve its aim of an international society free of illicit drugs. Substance abuse and the illicit trafficking of drugs is an evil in our society and disorientation among a majority of the youth. Drug trafficking is an industry working generally on a vicious cycle of manufactured demand and then supply. Streets of cities and towns in Fiji are in the limelight of drug peddlers who sell or expose us to drugs as we read in the daily papers and police are doing their best but we need to change the mindset of our young youths and educate proactive citizens. The 21st century with its greater communication processes has also enabled a greater dissemination of the cause of anti-drug abuse worldwide. Also thanking our brave officers who keep our border in control despite all odds. Neelz Singh Lami

The standard of football refereeing is again in the spotlight. Football must take a cue from rugby and work in collaboration to see how they can best implement video assistant in football matches. Pranil Ram Votualevu, Nadi

Do you mean to say that you couldn’t fix the problems of the past, given the 15 years you were in government? OMG! Edward Kumar Lautoka

As the election day nears (actual date is still a mystery), one enquired if itchy palms were becoming prevalent (unrelated to monkeypox). You know, there exists a belief about itchy palms and money. Mohammed Imraz Janif Natabua, Lautoka

Reality of the matter

The A-G’s statement regarding poverty shocked me. I work with the underprivileged and know what the situation on the ground is like. I invite the A-G to come to the West and we travel around to where the underprivileged live. Maybe he will see reality. Allen Lockington Kava Place, Lautoka

The A-G and FijiFirst party general secretary, Aiyaz Sayed-Khaiyum, has questioned the methodology and credibility of the Western Force Research polls. According to Fiji Sun’s acting publisher and CEO, Rosi Doviverata (FT 24/6), “Fiji Sun has been publishing the independent Western Force Research public opinion survey before the 2018 general elections and no one complained”. I believe someone seems to be in panic mode. Anthony Sahai Suva

The best person in the office these days is the one who brings Rewa Butter for morning tea. Kiran Khatri Samabula, Suva