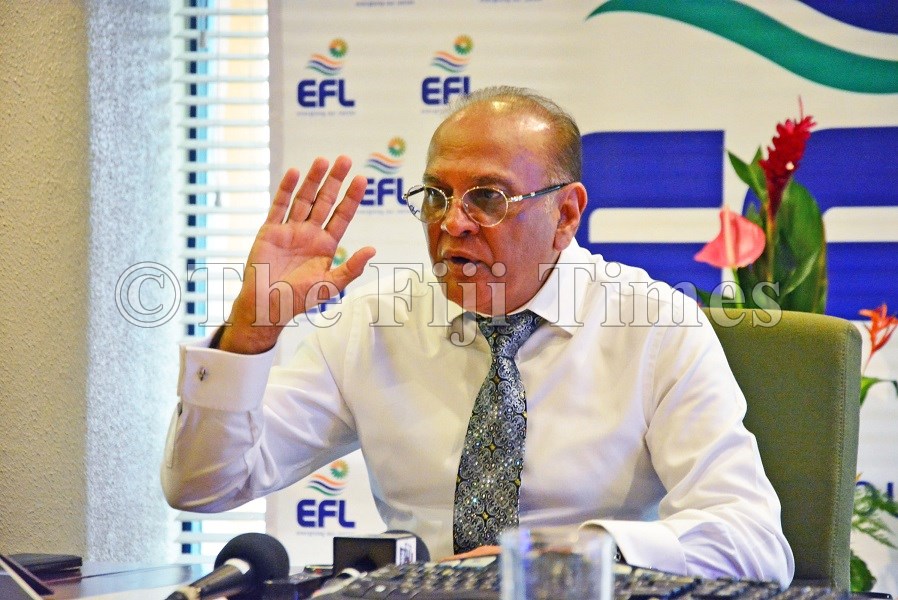 We refer to comments made by a Mr Ronnie Chang in The Fiji Times yesterday, Tuesday, June 21, 2022.

At 10:25am, the Vuda–Sabeto–Waqadra and Qeleloa transmission line tripped because of lightning strike, causing a temporary power disruption to the following areas: Qeleloa, Natadola, Maro, Sigatoka and Korolevu.

As mentioned in his letter, power supply was restored at 10:33am, within five minutes of the outage.

The 33kV overhead transmission line is on the mountainous terrain consisting of high rise ridges and hills.

The overhead lines are exposed to lightning strikes which is beyond EFL’s control.

EFL team sincerely apologises for the inconvenience caused to our valued customers because of the “power disruption” which was caused by a lightning strike.

Another letter (FT 21/06) “Power outage” describes as intolerable the short loss of power following thunder and lightning with the suggestion that a solution is competition to EFL.

I wonder how competition would help protect the distribution system from trips caused by lightning if that was the cause in the case referred to?

If competition was in place to address this type of outage, at what cost to the consumers that choose to use them would it be if underground cables protecting them from lightning with a second complete distribution system Fiji wide was the answer to improved reliability?

As for competition, maybe improving service delivery I would suggest.

EFL’s service delivery is pretty good from what I have witnessed, both proactive and efficient.

Just recently I called EFL to advise of creepers crossing the phase wires on a nearby pole that could cause a trip, they were there to address it within the hour.

It’s unfortunate they had to use their resources because the council are not maintaining verges where they should be.

I’m glad that EFL has made a handsome profit or some $23 million.

Can we be assured that there will be no unplanned power cuts.

I BELIEVE the CEO of EFL, Hasmukh Patel, has completely turned EFL around.

Not only has he made the company very profitable, contributing directly to the Fijian economy, but power cuts have significantly reduced from the early 2000s when they were frequent.

The company has become so prestigious in fact, that Japanese investors did not hesitate to jump at the opportunity to invest in it.

Those negative talkers about Mr Patel’s appointment to the Airports Fiji board should worry more about what they’ve done for Fiji.

Coming back from doing some research work in Suva, my daughter, a Year 13 student at St Joseph’s Secondary School, was robbed at the Western Bus Station.

After topping up her bus card and heading towards the bus station to board a bus down to Navua, a little boy sneaked up her side, grabbed her purse and ran across to the Flea Market side.

Fortunately, my daughter was fast enough to give chase, tied him down and got back her purse.

The most hurtful part of her story, as she relayed it to us at home, was that no one bothered to assist her when she was chasing down the small boy even though there were people everywhere.

Her story has indicated to me that in the face of being a modern society, Fijians are becoming more individualistic and do not care much about others anymore.

In other words, Fijians are becoming less caring in this modern day and age.

Our economy is slowly normalising with more tourist arrivals, new business opportunities and some businesses which were closed because of COVID-19 are opening again.

The hotels’ occupancy rate seems to be increasing and very soon the night life, I mean nightclubs, will open.

One thing the tourism industry should not forget is the “Go local” slogan.

Please give our locals the same privilege that was given to them when the tourist numbers were down.

The words of Benetton-bound former Fijian Drua winger Onisi Ratave stood out, “My family is very important to me and I knew age was catching up so I had to make a decision that not only benefits me, but them too. That is what drives me to play the sport and I’m thankful for the opportunity.” (FT 20/06)

Ratave made his break into the Fijian Drua team and although he had limited game time, he caught the eyes of Italy-based Benetton club.

Ratave has speed to burn, but it’s a pity his expertise was not used much by Fijian Drua coach Mick Byrne.

Ratave urged young and enthusiastic rugby players to be patient and the opportunity would come knocking on the door.

His message is set to motivate budding ruggers, “My message to aspiring rugby players is to always be patient and work hard. I am a firm believer of this as I was once in their shoes. All the hard work you put in now will reap fruitful benefits and I urge all youngsters to follow their dream no matter the outcome.”

Thank you for the inspirational message Ratave and all the best for your endeavors with Benetton club!

Thank you for the story Marayawa!

Attorney-General Aiyaz Sayed-Khaiyum saying “a lot of people want to come into government because they want to have power” (FT 21/6) is a classic example of psychological projection.

Hence Fiji Labour Party leader Mahendra Chaudhry is spot on in pointing out that the A-G’s comment about power hungry politicians was an “apt description of himself”.

That is to understand one’s own character first.

I wonder how well Mr Sayed-Khaiyum knows himself?

Bonuses tied to profit is a good thing for any organisation but what about if part of it is invested in improving its services?

I believe the greatest challenge for small political parties is achieving the 5 per cent threshold.

I was not much surprised by the appointment of the chief executive officer of Energy Fiji Ltd as the new chairman of Fiji Airports.

In your article he was praised as, “Mr Patel brings with him a wealth of business experience.” (FT 18/06)

Undoubtedly, he is one of the best businessmen in our country.

The current status of frequent planned and daily unplanned power outages speak for itself.

I sincerely wish him all the very best in his new role and pray that the planes take off and land as scheduled without any hiccups.

The onus was not really on the family, to make a contribution, to that charity.

But to them it was an obligation, for which there was really, no avoidance.

They felt good and anew, at the end of the day, when they knew, the needy received things, without having to pay.

I think Fiji soccer should start focusing on constructive export rather than short-term import.

There is no doubt that a lot of employers in the formal sector are holding back with pay rise and salary adjustments for the past three to five years.

Some are excusing themselves and are still chanting that it is because of COVID-19.

As the Government has made progressive adjustments on the increase in minimum wage, it’s high time the employers should reconsider their stand.

I agree with the recent statement made by honorable A-G that “your pay is supposed to go up because the minimum wage has gone up”.

It’s high time now as workers are deprived of our rights.

A-G’s openess to raise the grievance directly with him via email is just timely.

We also seek intervention in municipalities around Fiji for the pay rise and we are definite that our plea will be heard soon.

Eyes on the bigger picture

“We have our eyes on the bigger picture.”

Cotter added 16 members of the Fijian Drua side into his team in a bid to prepare a solid mix to battle Australia A, Tonga and Samoa.

The PNC is the platform for the Autumn International Tests and next year’s RWC in France.

Our opponents have named formidable sides and included big names.

This means fans are in for a treat at the ANZ Stadium and at Churchill Park.

Best wishes to Cotter and his brigade!