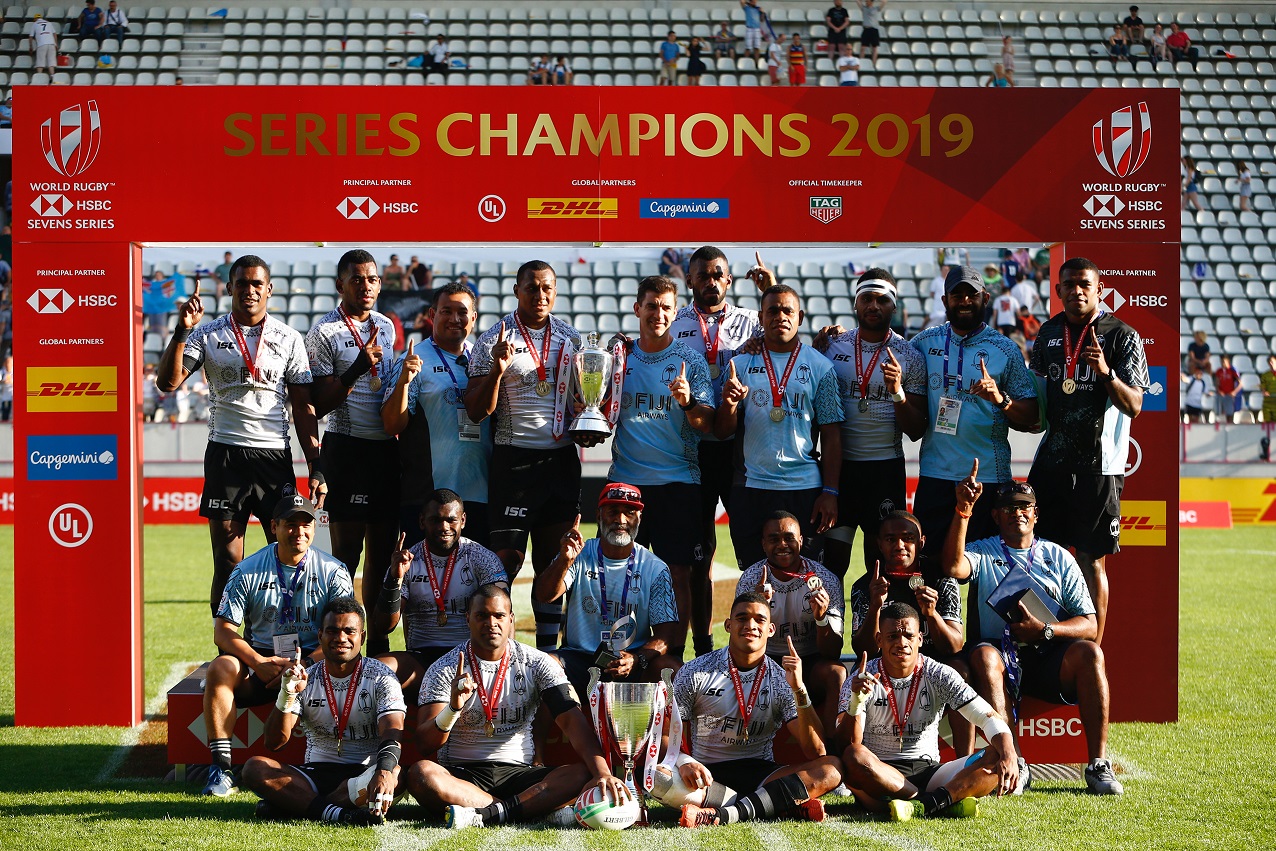 These boys won fame and accolades because of their incredible work rate, the ability to deliver outrageous off-loads and the potential to score some heart-throbbing tries.

Our future stars helped Fiji reach six cup finals and win five of them and it was a proud moment seeing Tuimaba, Derenalagi and Botitu make the 2018/19 WRSS dream team.

The trio was nominated for the Rookie Award which was taken away by Tu Meli who was rated highly by rugby pundits for his work rate and thrilling off-loads.

Ironically Derenalagi’s father was part of the Fiji 7s team that won the 1996 Air France 7s, beating the hosts (38-19) and young Tu Meli created history by being part of our first win in Paris.

On the other hand, Ratu was crowned the 2019 Paris 7s player of the final while Botitu was picked the DHL impact player.

Our rookies have become a “hot cake” and I’m sure we are going to lose their services soon to a European club.

However, before that I’d love to see our warriors rock the 2019/2020 WRSS circuit and next year’s Olympic Games.

Our 7s rugby team displayed another world-class 7s performance at the Paris 7s leg at the weekend.

As the commentators said, “The Fijians from another rugby planet “besides” the Fijian geometry, sevens rugby is insane.”

An island nation with a population of less than a million.

What an achievement compared with their counterpart’s monetary benefits.

Thanks to our gallant sevens warriors for elevating the “benchmark” our previous sevens team had established.

All of you including the coaches, trainers, etc., have made Fiji very proud.

And with our God’s backing, you did it with flying colours.

Ask not what your country can do for you.

Ask what you can do for your country.

Can the Labasa Taxi Association look into the attitude of some of their taxidrivers who I think do not deserve to serve the public because of their unfriendly character and ways in regards to passengers and choice of routes.

For the past few weeks, I have been travelling to Labasa — the “Friendly North” town.

During my trips, I witnessed firsthand how unfriendly some taxidrivers were, when approached, they were giving excuses or ignored the fact that you were talking to them.

One of the experiences is when asked if they are free, some would say yes and once you tell them the destination, they would start making excuses.

Another would be when you approach them and mention a short distance they would say, “busy”, but when another person comes with a longer distance they say “yes”.

I hope the association can look into the attitudes of some of their drivers and at least have a session with taxidrivers who have this kind of unprofessional attitude.

Otherwise, go sit at the taxi base and observe the drivers.

I believe there is an air of selfishness from those who are in support of the proposed tariff increase in electricity, whether it be partial or full.

Have those supporters consulted their friends, neighbours and relatives who will face financial difficulties?

If they agree in the name of green energy projects and sustainable developments, are they aware that Energy Fiji Ltd (formerly Fiji Electricity Authority) has been in Fiji for almost “forever” to all this?

Manoj Lal Patel couldn’t have been more succinct in pointing out that “The poverty-stricken do not need to just survive, they need to live” ( FT 3/6).

That is to live with human dignity.

A decent living wage goes a long way in making that possible.

And we get to be a fair and just society.

I believe many don’t get that.

They are unable to see beyond their own vested interests.

Fiji Sports Council with other stakeholders must be commended for hosting Super Rugby games at the ANZ Stadium in Suva.

Muchas gracias to all involved.

How about you guys kerekere mada to the NZRU and ARU to host a Bledisloe Cup Test in Suva.

One can just imagine.

While FCCC calls on consumers to express their views on the planned rate increase by EFL, one wonders about their ability to plan for the future of secured power supply in Fiji.

Is this the same company which, for years, paid bonuses to employees and hefty profit-sharing with Government?

Have they not foreseen to invest to upgrade the altering and failing infrastructure?

Yes, I believe they invested in more hydropower, backup diesel generators, but that was it.

Now the inflation rate is used as an excuse to increase the rates but when ordinary workers ask for a pay increase for the same reason they get denied.

To be fair — so should EFL!

I just like to ask Mr Hasmukh Patel and all the other electrical engineers, why can’t they use Fiji Sugar Corporation’s steam generating plants with a little bit of upgrading and installing a few bagasse driers similar to wood veneer driers and produce cheaper electricity all year round.

Jerry Tuwai should now be known as: “Fiji’s Pocket Battleship”.

I caught a bus to town the other day and found something weird.

I counted a total of five seats with damaged back rests.

One had none at all.

I’m thinking either no one has complained to the driver or he just doesn’t care at all about passengers’ comfort.

I think if there is an increase in prices of alcohol and cigarettes, there will be more hardship for families.

I believe by increasing the prices, it will not lessen consumption, but they will take less for the family.

The children will suffer more.

Those who are consuming these will continue at the same rate.

We all heard the commentators of the Paris 7s final ask if there was a statue of Jerry Tuwai anywhere (in Fiji).

Any chance of honouring them in a Hall of Fame of some kind?

Or even statues on street corners?

The influence of Pacific Island players in the best rugby competitions around the globe is unquestionably immense.

Players with Pacific Island heritage have made it into sevens and fifteens teams of other countries.

The PIRA concept should be revived.

LTA advising that traffic lights will be manually controlled via locally-sited control boxes is concerning.

Can the LTA chief executive officer please advise whether from the moment of inception to install traffic lights (however far back that was) whether designs existed to have these lights networked and remotely controlled?

Or were they piece-meal installed and only now is the idea of networking them arising?

We have got e-travel up and working plus any village with access to mobile communications can have games live-streamed from the other side of the globe.

So I do not see how is it in 2019 we cannot have our traffic light system dynamically and autonomously operated at optimum levels plus live video monitoring.

Anyone with a cursory appreciation of traffic engineering will know that a closed-loop dynamic system works best and lends itself to a fully autonomous system with facillity for manual override if the need arises.

The Paris 7s win was the icing on the cake.

Our boys wrapped up the enthralling WRSS by putting their bodies on the line and shedding tears, sweat and blood and created history in the process:

1. Fiji won in Paris for the first time.

2. Our boys will travel to the Olympics as top seed for the second year running.

3. We won the cup titles at Hong Kong and London with as many as eight debutants.

4. Fiji for the first time since the inception of the IRB 7s series (1999/2000) won back to back tournaments on the circuit (London and Paris) in consecutive weekends.

5. It was the first time for Fiji to win five tournaments on the WRSS circuit back to back — last year we won in Hamilton, Vancouver, HK, Singapore and London and this season our boys won in Cape Town, Hamilton, HK, London and Paris.

6. It’s the first time that Fiji has defended three cup titles from the previous year — we defended our Hamilton, HK and London 7s titles this season.

8. Three of our players were nominated for the Rookie Award which we won back to back. Last year it was Sau and this year Tu Meli won the award.

9. Four players from Fiji made it back to back into the WRSS Dream Team. Last year Jerry, Nasoko, Sau and Nasilasila made the Dream Team while Tuimaba, Jerry, Botitu and Derenalagi made this year’s Dream Team.

10. It’s the first time our boys walked away with three gold medals at the conclusion of the WRSS circuit.

12. It’s the first time that a Fijian has won the Rookie Award (Tu Meli) and also the DHL Impact Player Award (Botitu) together.

14. Our boys created history by becoming the only team to win five HK 7s tournaments in a row.

Vinaka vakalevu FRU for steering the team and hats off to Baber, the management and our boys for this piece of history!