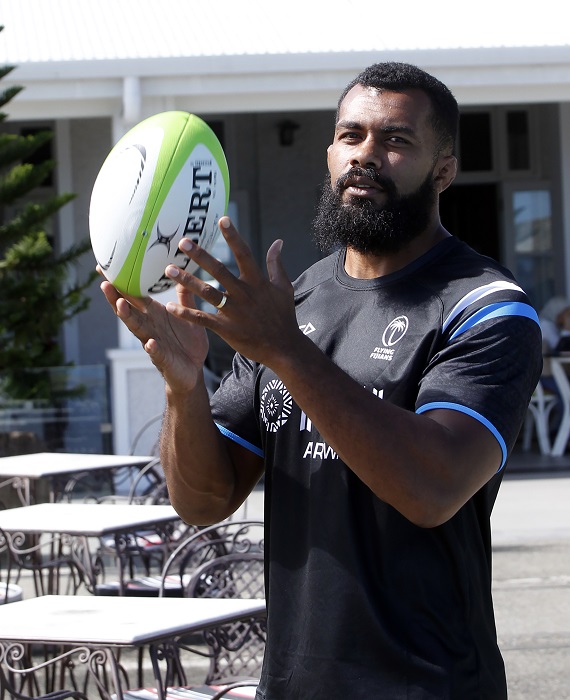 The Flying Fijians’ captain Dominiko Waqaniburotu thanked our heavenly Father after a great win over the NZ Maori All Blacks on Saturday.

He reiterated the fact that our Lord, was the 1 per cent of inspiration that completed the victory after he and his team had perspired the remaining 99 per cent to prepare themselves for the game.

As the team manifested the words of the Prophet Isaiah, “…they soared on wings like eagles, they ran and never grew weary, they walked and were never faint…..” on Suva’s ANZ Stadium turf, the rugby world was put on notice — the new Flying Fijians team’s win over France was not an isolated victory.

The whole team played with the innate talent of all Fijians.

They played Fiji’s brand of rugby — the organised chaos of unstructured offloads and unco-ordinated running as only Fijians can, to make a rigid game as entertaining for themselves as well as for all who witnessed the game in all its mediums.

Our Flying Fijians rugby team have overcome the physical and mental failures of the past.

They go forth with renewed strength and belief in themselves.

They need to maintain this momentum for the next few games going into the Rugby World Cup in Japan in September where they need to empty the tank in all their games to reach the finals.

Unlike the beautiful tropical weather at home last week Saturday, this week our boys will be up against cold conditions and a passionate home crowd.

Conditions in NZ are expected to be cold and wet and it could hamper our chances of a back-to-back win against the NZ Maori, who are still hurt from their disappointing loss in the Capital City.

However, our overseas-based players should not have problems adjusting to the chilly conditions and should come out with all guns blazing at the Rotorua International Stadium on Saturday evening.

On the other hand, I’d love to see an improvement in our lineouts as the Maori pride and dignity will be at stake in the heart of the Maori.

1. Lautoka City Council from time to time has allowed its parks and open spaces for open air evangelism, church service and other functions.

Permits for such functions are issued by the police department;

2. Shirley Park is usually patronised by homeless and street kids during the day and becomes haven for criminal activities at night, more-so during weekends.

The Lautoka City Council has allowed evangelism programs targeting those who have called Shirley Park home from 7pm to 9pm on Fridays and Saturdays.

As a result of this initiative, a notable reduction in criminal activities has been noted in the Shirley Park/ Marine Drive area;

3. The Tilak ground at Vomo St is usually used by members of the public for recreational sports such as rugby and soccer every afternoon.

The ground is hardly used on Sunday morning and as such the council has allowed the ground to be used for church service from 8am to 12 midday on Sundays only for the month of July.

However, after receiving complaints from members of the public about the noise level, we had revoked our approval;

4. The allegation by the writer that we have not allowed members of the public to use the park so that the church group can use them is misleading and mischievous.

Our parks and gardens are always open to members of the public at all times.

Both men carry Fiji’s hopes in their own rights.

One of the two gentlemen is Fiji soccer’s beacon of hope, Roy Krishna.

Fiji soccer men’s journey could end without success at the Pacific Games.

I sincerely hope for a soccer miracle and they do not return empty-handed like the last Pacific Games.

For once, the Fiji Football Association (FFA) should be made to fulfill its promise of paying players should they win.

All hope lies on the team now.

According to websites online, the oldest profession is prostitution.

But it got its status after World War I.

Try as we may, we couldn’t eradicate it.

You ask me why?

You have the answer.

And the drug problem will be the same.

Solution — if athletes can be banned when they are tested positive for drugs, test people who are arrested for whatever reason and also charge them for drug use.

We have been charging people for possession, let’s add this.

We won’t eradicate it, but people will be more wary just in case they are caught especially for drink and drive offences.

Does our national identity Fijian or equal citizenry give the right to ownership on native lands and traditional qoliqoli to each and every citizen of this country?

If not, doesn’t that define and describe the word vulagi in the iTaukei language?

I am really disturbed when one of my native word is being taken out of context and being politicised.

Even a native newborn baby is referred to as vulagi and not Fijian.

That’s how the word vulagi is respected.

I wonder what’s next for the Pearls, any clues?

I know that advertisements are important, they sponsor air time on TV shows, especially for the free to air TV.

I won’t be surprised if one night when I’ll be dreaming an announcement will come on and say, “We pause for a word from our sponsors”.

I believe we have been assured that the pothole issue would be fixed but it will take time.

I believe we have also been assured that the taxi issues in the West will be fixed but it will also take time.

As long as these assurances are not guided by our famous local “timelines”.

Amenoni Nasilasali would not be a surprise if he returns to the national 7s team with his individual brilliant performance in the recent Skipper and Farebrother encounters.

Nasilasila’s skills have been breathtaking and game-winning at crucial moments of some matches.

We miss his sizzling performance, footwork and ability to thrive when under pressure, Nasilasila would be my pick for the Olympics gold medal.

It seems every time we pick up the papers or turn on the news on TV nowadays all we get here are stories relating to the drug ‘Ice’.

This drug in particular has now gotten out of hand so much that the police force, I believe, are now setting up a Narcotics Bureau to tackle the problem.

This drug is not natural and it has to be produced in the laboratory under skillful hands.

One needs to know about chemicals to carry out this task but everything about producing the drugs are readily available on the internet.

What can we do to tackle this ever-growing problem?

Can the police force do it on their own?

Let’s help one another and rid our paradise of this evil once and for all.

What benefit does the State or Fijians derive from removing chaplains from schools?

I wish to bring to the authorities notice the issue of bus stops.

There is no bus stop near the roundabout where Waya, Vomo and Caka streets meet.

Buses tend to stop about three metres from the roundabout on their way to town.

This happens early in the morning when the drivers stop for students of Jasper and Natabua to get off.

It has become a nuisance for me, to have to wait while the passengers get off the bus.

The peak traffic hours are from around 7.30 am to 8.30 am and the buses stop right there and cause me to have a near heart attack from restraining myself from yelling at the driver.

Could those yellow lines that depict a no-stopping sign be painted on the curb for drivers to see.

I suppose I speak for the many people I see waiting patiently with red faces for the lordship of a driver to do his own thing.

But a bloody bus bay somewhere there so that traffic may flow freely.

I believe this was the worse Netball World Cup Fiji participated in.

Looks like the youngest team ever and we should build up now.

I mean right now to be better in the next World Cup.

Fiji seems to prepare a year or two before the World Cup.

Let’s change the strategy now, I believe we had a few experienced players in the buildup but they seemed to vanish before the tourney maybe because of injury.

Do we have a required support team?

Or what are the roles of the officials travelling?

As we try and get better the other teams will be much better than they are now.

Come on Netball Fiji let’s bring some magic out of netball, let’s get back to where we were a decade ago.

If heads need to roll for the betterment of netball then so be it.

Let’s look to the future now.