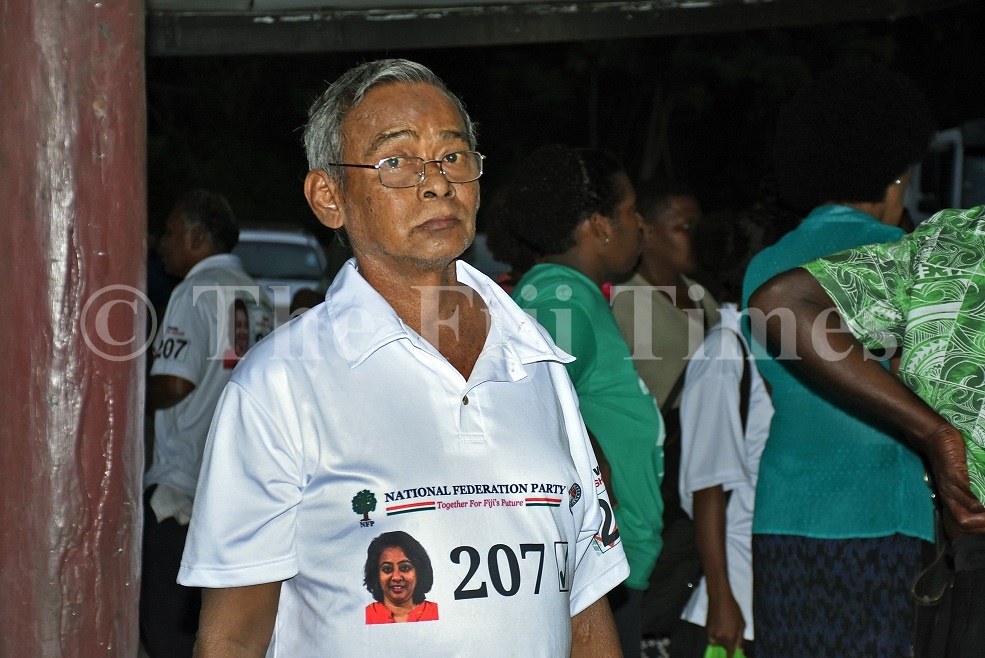 I am saddened by the news that the famous Allen Lockington is now no more. He had left behind a legacy of a true statesman, being the voice of the voiceless, and being the hands and legs for the poor and the needy. Farewell great son of Fiji, your contribution to our Fijian society will be missed dearly. If you happen to meet Simon Hazelman, please do send him my regards. KOSITATINO TIKOMAIBOLATAGANE Vuninokonoko Rd, Navua

Every so often there is a living saint. A damn good decent man. A life well lived. Vale Sir Allen Lockington. Also belatedly to Simon Hazelman. To the Lockingtons and Hazelmans. So sorry for your loss. Thank you to The Fiji Times for bringing these lives into our homes, to make the sun a bit brighter each day, although today it’s drizzling, probably another broken pipeline upstairs too. You tell them Allen? Edward Herman Victoria, Australia

Tribute to a humble soul

“Good men must die, but death cannot kill their names” — anonymous. The late Allen Lockington will forever be remembered for his service to humanity. Besides being a well-polished Letters to the Editor contributor, Allen worked tirelessly to see no one went to bed hungry. He truly was a living example of humbleness and companionship of the needy and disadvantaged. Jovial and very down to earth personality. It’s rather unfortunate that I didn’t get the opportunity to meet him in person. Isa my brother rest in peace. Hoping the grieving family finds the courage and strength to overcome their sorrow. Suresh Chand Nadi

It is a sad day for Lautoka. Not just Lautoka but the country has lost its most profound and fearless writer. However, above all he was a humanitarian. I have heard of tales of his long routes to the interiors of Fiji, to help distribute essentials not just during natural disasters but all year around. He would leave early mornings and return late in the evening. Allen was a jovial human being, inspiration to many writers, a kind heart, always placing tireless effort to those in need. Tejal Lad Lochan Lane, Lautoka

The loss of my mentor!

I was deeply saddened to hear about the loss of my mentor and the Letters to the Editor column guru Allen Lockington. Allen was sick for some time and on Monday morning took his last breath as he bid his family, friends and this column good bye. In December, we farewelled another member of this column — Simon Hazelman and now I bid farewell to the man who meant so much to me — the man whom I revered so much as I had learnt so much from him. He motivated me to start writing letters and kept me going with his criticism and words of encouragement. Apart from the love for writing, Allen had a love for humour as he shared a lot of wonderful posts on his Facebook page. At the height of the COVID-19 pandemic, he won hearts, fame and honour for his tremendous work in providing necessary provisions to Fijians in the West along his best mate Navnit Ram (TD). I continue to treasure the stories, pictures and his FB posts, some which made many laugh and some which brought tears to many eyes. He was full of life and will be missed by many. I could not stop crying when I heard of his demise as I lost a true friend. There will never be another Allen Lockington. Rest in peace my guru! Thank you for being a loving and caring gentleman! My deepest sympathy and condolences to Mrs Lockington and her family! Rajnesh Ishwar Lingam Nadawa, Nasinu

I believe he’s last letter to The Fiji Times Letters to the Editor column was titled “Thank you” (FT 20/1) thanking the staff of Lautoka Hospital for their services and from his last paragraph, I quote: “Last but not the least I hope hot water can be put in the showers”. Isa I hope the Minister for Health will take into consideration the last wish of a scholar. Mr Lockington was not only a wordsmith, but truly a gifted patriarch and a Samaritan. “He who has gone, so we but cherish his moment, abides with us, more potent, nay, more present than the living man”. – Antoine de Saint-Exupery. Moce mada, thank you and may you rest easy in grace and love Mr Allen Lockington! AREKI DAWAI Suva

GONE too soon Sir Allen  Lockington. I really wanted to visit your Kava Place parliament. I hope your other two Kava Place parliamentarians start writing in this column again. You will be greatly missed by the people of Fiji. The grassroots people all knew you. You did what many elected paid parliamentarians could not do. The stories, the jokes and half truth will be missed. Rest in peace Sir Allen Lockington. GEOFFREY CHAND Lautoka

OUR most dear Unkol Allen is no more. He will be dearly, dearly missed. Rest in peace Unkol. May his memories be a blessing to all who knew him. A new angel now walks the streets of heaven. MANOJ LAL PATEL Drasa Ave, Lautoka

I am profoundly saddened to have learnt of the demise of my good ‘weka’ and prolific writer Allen Lockington. Allen and I go back a few years ago when I mooted an idea for all writers to form a political party and contest last year’s elections. When I listed down the writers’ names, Allen was number one; “the evergreen”. The following day, Allen responded to my letter and bestowed on me the title of Sergeant-At-Arms. Intrigued, writers responded the following days with my good tovata and sharpshooter; the late Simon Hazelman urging writers to come on board and challenge our nation’s status quo via the 2022 General Election. Like Simon, Allen’s letters showed that he wanted people to speak their minds freely without fear and malice towards none and of course, with a great sense of humour! Further, Allen was instrumental during the height of the pandemic, reaching out to thousands of people that had suffered tremendously with distribution of food rations and other essentials. Virtually, Allen’s actions spoke louder than his words! I was disappointed that during Fiji’s 50th Independence Anniversary, our nation’s leaders failed to acknowledge the People’s Parliament to award regular writers that have been the voice of the people. If one that surely deserved a medal for his tireless contribution to our nation, my choice for the award would’ve been none other than my good weka; Allen Lockington. Allen now joins Simon and the writers that fought the good war and ran the race and had kept the faith! Surely, “good and faithful servant, you have been faithful with the little things, enter into your Master’s glory!” Moce mada noqu weka! Alipate Tuberi Suva

I am saddened to get the news that fellow letter writer Allen Lockington passed away. He was a truly people centered person who felt deeply about poverty and other adverse circumstances in society that posed obstacles to people’s quality of life. With his letters he sought to draw attention to these impediments so that they could be addressed. He also took direct action through his grassroots community work to better the lives of his disadvantaged fellow Fijians. Allen will be sorely missed. RIP, bro. Rajend Naidu Sydney, Australia

Isa, sad to learn the sudden and shocking passing of prominent letter writer and renowned philanthropist, Uncle Allen Lockington. Your tireless humanitarian efforts will always be valued by all those that you have meticulously aided and supported in the last couple of years. Moreover, the cohesive Fiji Times letters family will undoubtedly miss your thoughtful and occasionally humour filled contributions. Rest high Unkol, till we meet again! Nishant Singh Lautoka

It is truly a sad day as most if not all of us who regularly pen our thoughts here will surely miss him. Rest on high Allen Lockington. He was an aspiration to us all. His letters and articles were always from the heart. A true resident of Lautoka. I remember a few years back when I had just started writing letters here, he was looking around to find out who I was as there was a disagreement with what I had written. He finally caught up with me during a school rugby match and walked straight towards me, reached out his hand, shook mine and said: “Good writing man. Keep at it and don’t worry about Wise (Muavono).” Apparently the grog swipers were not happy with my comments. Moce uncle Allen. We will miss you. Edward Kumar Lautoka

I think all the problems in Fiji have been solved. That is the message I get when I read this column. Everyone in this column is very happy and all feel free from the shackles of the past. Not to mention all the love and freedom of speech. Which other country has solved its problems through so much love, grog and prayers. Fiji is so unique. So, we all should now just sit back and count the money that is going to be rolling in. Jan Nissar NSW, Australia

WHAT else are Mr Bainimarama and Mr Khaiyum trying to prove to the nation? There are many other better and positive things to do rather than crying over spilled milk! Democracy has spoken, period. Don’t be a sore loser, show some respect and grow up guys! AREKI DAWAI Suva

I implore the government to put into place a meaningful performance appraisal system for those working in the immigration department. The service in Lautoka is pathetic. One has to wait up to a full working day before a passport lodgement takes place. It takes just as long to collect your passport when it’s ready. Some staff appear to have it in their minds that serving at the counter is below their pay grade, even if the paying clients begin sweating from congestion in the little room. Dennis Rounds Jinnu Rd, Lautoka

FijiFirst Party general secretary Aiyaz Sayed-Khaiyum comes back and starts lecturing us about the law. It’s painful to get through his lectures. Fiji was at peace when he wasn’t here. Navneet Ram Lautoka

What’s with tagging these young ‘men’ as babies? Try that with the junior, sub junior and senior boys at the Coca-Cola Games; all the effs, gees and dees will be the order. Call them for what and who they are, young ‘men’.They, are doing Fiji proud, no? Manoj Lal Patel Drasa Ave., Lautoka

Can we have a break from the constitution debate and focus on the real issues facing the real people of Fiji? Mohammed Imraz Janif Natabua, Lautoka